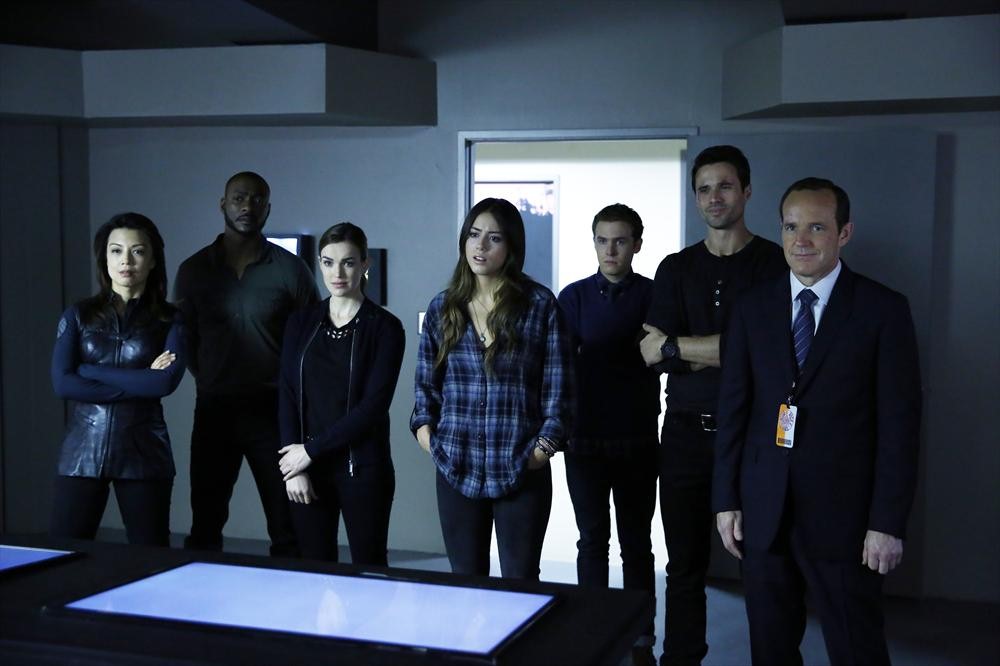 When last we left our agents of SHIELD, they couldn’t figure how to dress properly for the current weather they were experiencing, and it looked more and more like Ward wasn’t really deep deep undercover after all.

No wardrobe malfunctions this week. Instead we find themes of love lost, jealousy, betrayal and forgiveness in this episode of “Marvel’s Agents of SHIELD.”

Ward has returned to the fold, but it looks like he’s only there to seduce Skye into decrypting the hard drive. He’s had Garrett beat him up so it appears as if he just barely escaped HYDRA.

As Simmons patches him up, he relays what has conspired since he left with Victoria Hand and Agent Garrett in tow (with minor adjustments to truth, of course). Was anyone really listening? Because all I heard was blah-blah-blah. There he was, Grant Ward, in all his magnificent glory, his beautifully muscled torso sans shirt being patched up by one lucky Gemma while all the ladies (and the men) look on.

What did you say?

You are and always have been a member of HYDRA?

You’re here to seduce Skye and kill whoever gets in the way of your mission?

Oops. Sorry, where was I? Oh, right. Ward claims he killed Garrett and managed to save the hard drive, but before he can guide the team into doing what he came there for, Coulson puts Skye on the task of locating all the inmates that escaped from The Fridge. He asks about one, in particular, Marcus Daniels (aka Blackout). Even though Skye and May are against it, Coulson is insistent that he’s taking a team to locate Daniels.

Unfortunately, Agent Eric Koenig also stands in his way. Though he finally relents, he won’t let anyone leave Providence until they’ve gone through “orientation.”  Involving the mother of all lie detectors, each of our agents goes through a series of questions that will determine if they are loyal and telling the truth.

Here, we find out a little more about our favorite agents.

Q: You’re on a deserted island and beside you is a box. What’s in it?

Best Answer: “The TARDIS.” – Gemma Simmons (I would have accepted either the Floo Network or the Nimbus 2000 as well.)

Triplett’s grandfather was one of Fury’s Howling Commandos, but he’s reluctant to mention it as he wants to be commended for his own achievements.

Skye has no middle name or last name though the orphanage named her Mary Sue Poots. So yeah, Skye Nolastname is loads better.

Q: SHIELD is seen as a terrorist organization. Why are you still here?

Ward sweats it a little, but using his injuries (and a needle under his nail) as a way to cheat the lie detector, he’s able to make Koenig believe his story, but barely.

Everyone gets a lanyard, but we quickly find out everyone would have gotten a lanyard anyway because the badges all have tracking devices inserted in them.

Incidentally, at Def Con, a hacker’s convention in Las Vegas (yes, there is such a thing), they have this great contest where participants are encouraged to hack their event badges. The badge itself consists of live electronics mounted onto a circuitboard. Prizes are given to the most inventive hacks. Would love to see what those guys and gals at the convention could do with one of Koenig’s lanyards.

We find out Daniels was once an assistant at a physics lab where he was working on harnessing the electrical power from something called “Darkforce.” Daniels was exposed and is able to absorb all forms of energy. He’s obsessed with Audrey Nathan, a cellist. Coulson figures if they find Audrey, they’ll find Daniels. Turns out Audrey is not just a cellist, she’s the cellist – the woman Coulson was dating. The woman who thinks Coulson is dead.

He stays in the background while Triplett, Fitz and Simmons help protect Audrey in the foreground. They use her to draw Daniels out in the open so they can go all Ghostbusters on him with a MacGyvered gamma ray gun Fitz creates. They are able to dissipate Daniels into beads of black waste without Audrey discovering Coulson is still alive, but not before discovering that agents at The Fridge experimented on Daniels to enhance his abilities, not to diminish or eliminate them as Coulson thought.

Meanwhile, Ward makes short work of Agent Koenig (we hardly knew ye!) and barely takes a breath before he continues on with his seduction of Skye. His treachery is discovered though, by Skye who goes through a dry-heave/hyperventilating spell before she calms herself down and decides to earn that SHIELD shield she was awarded not so long ago by pretending she is none the wiser.

He cons her (or so he thinks) into getting on The Bus as they take off for parts unknown, but it looks like she’s taking two leaps forward before she thinks about anything once. Ward’s orders are to bring her back to HYDRA if he can’t romance the password out of her, but since the decryption of the hard drive is not only tied to Skye’s password but also to a location, he’s going to have to figure out a way to get her to said location. Skye’s going to have to think quick on her feet to get out of this one.

I noticed when they first kiss (after that promised drink), it’s Skye you hear whimpering as she yields to those delicious lips of Ward’s. Later, when the jig is up and Skye initiates a smooch to convince Grant she’s fallen under his spell, it’s he who is the one whimpering and submitting to her. Oh my. Excuse me while I go get a tall, cool one – drink, that is.

Coulson is still mad as hell at May because she didn’t tell him about TAHITI and gives her an ultimatum. He’s mad she chose duty over friendship, but wouldn’t Coulson have done the same if he were in that situation? He later realizes he needs to forgive May if he ever hopes Audrey will forgive him should he ever have the opportunity to reveal to her that he’s quite well and alive.

Seeing that Phil doesn’t want her around and any semblance of friendship is in pieces like the broken glass that litters The Bus, May leaves, dejected. She calls her mom (Tsai Chin) to pick her up (“Joy Luck Club” mini-reunion!) Looks like her mom was a spy herself back in the day and helps May with locating a woman named Maria. Maria Hill (Cobie Smulders), perhaps?

Fitz is jealous of Simmons’ burgeoning relationship with Triplett but can’t bring himself to say anything to her. Is there any truth serum or liquid courage in the medical bay we can inject Fitz with?

I still want to believe Ward is ultimately good under all this, but it’s hard to stay true on that path with all that is going on. Are any of the things he’s told Skye the truth or just his HYDRA playboy ways to get the information he needs? Will he redeem himself in the end?

Did they have to cast Amy Acker as the Cellist? I have never been of fan of hers. Can’t put my finger on why, but she irritated me on “Angel,” on “Dollhouse,” and even in “Much Ado About Nothing.” I liken her to Gwyneth Paltrow, for some reason. Sisters from another mister?

I’m also wondering if Ward is possibly related to Garrett. We now know Ward isn’t his real name. Is it possible that Garrett is the older brother he talks about? Though, I think Garrett might be too old to be his brother since we’ve seen flashback in previous episodes that Ward’s brother was only about 3 to 5 years older.

Best line: “Because nothing bad ever happens when you work with something called ‘Darkforce’.” – Coulson

Only two more episodes before the season finale!

What did you think of this episode of “Marvel’s Agents of SHIELD”? Do you think Grant Ward is #TeamHydra or #TeamSHIELD? Tweet us your thoughts @BeTheBuddha and @reellifejane!