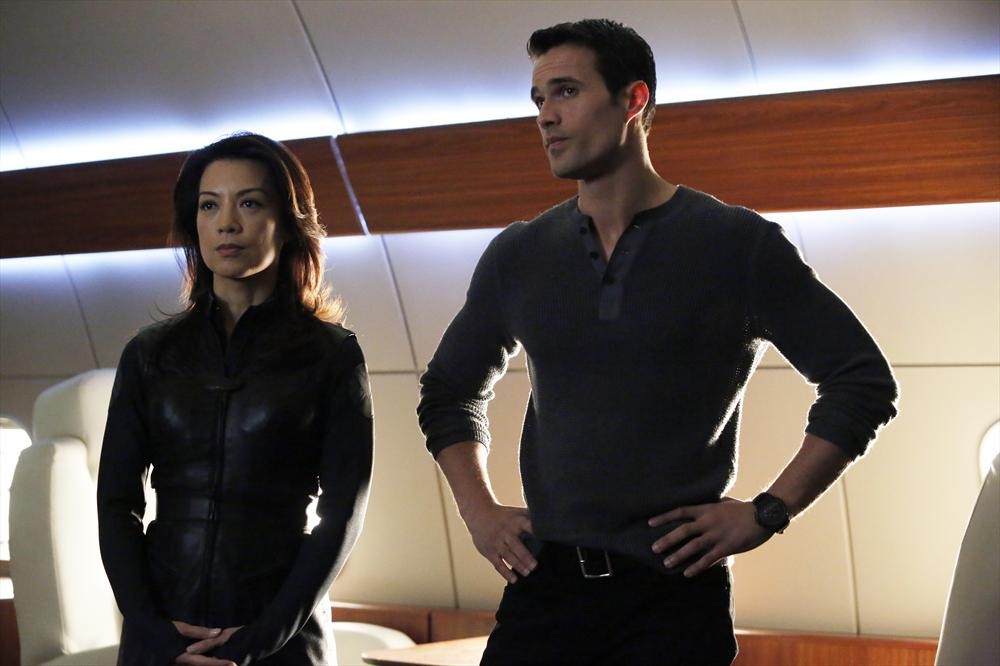 SHIELD is baaack! (And so am I). It seems like forever and a day since we saw a new episode of SHIELD (though it was really less than a month ago). It looks like the show will be action-packed until the season finale after this most recent episode.

Agents John Garrett (Bill Paxton) and Antoine Triplett (B.J. Britt) are back to help our team locate and capture The Clairvoyant. They are finding it hard to make any progress with our former nice guy turned evil henchman Mike Petersen/Deathlok literally standing in their way. Mike’s been given the moniker “Deathlok” by our gang after he became a guinea pig of the project. He has basically become Evil RoboCop (I guess Peter Weller was otherwise engaged and was not available to take the role!)

Skye is finally made an agent of SHIELD, much to everyone’s delight – though Ward tries his best to remain stoic about the whole thing. It only took a couple of bullets to the chest and a near-death experience to get that commemorative coin — I mean, shield of SHIELD. Coulson looks at Skye like a proud father when he hands her the SHIELD shield.

Fitz and Simmons are trying to figure out, secretly, what is in the drugs they shot up Skye with to save her life. The others, with the help of Victoria Hand and company, try to find The Clairvoyant.

They track Deathlok to an old abandoned racetrack. Coulson and Garrett track Deathlok to a room filled with computer screens and The Clairvoyant, Thomas Nash, who is paralyzed, wheelchair bound and speaking through a software program. Before he can reveal his dark secrets, Nash is shot and killed by Ward.

The initial assumption is Nash is The Clairvoyant, but when Skye and Coulson get into a room together, they immediately start brainstorming and realize that guy probably wasn’t The Clairvoyant at all, just a clever decoy. They deduce the real Clairvoyant is actually an agent of SHIELD!

Now, once that realization comes to light, everyone is suspect.

Ward’s actions are hinky, at best. It’s so out of character for this by-the-book agent to kill because he was emotionally overcome that you know that something is up. Either he’s taking orders from someone else (Director Fury, perhaps?) or perhaps he’s being influenced/blackmailed by The Clairvoyant.

Fitz is down in the maintenance bay and discovers a hidden encrypted line that May has been using to call … someone.  Is she calling Director Fury or (♪bom-bom-bommm♪) The Clairvoyant?

May discovers Fitz knows and goes after him. She’s cornered by Coulson and Skye. Coulson assumes May is guilty and turns his gun on his longtime friend. May is about to explain when the plane is abruptly turned around and we see Hand give orders to kill everyone on board except Coulson.

So who is May calling in secret? I have to assume it’s Director Fury, as she identifies herself as an agent every time she calls.

Who is The Clairvoyant? Is it Victoria Hand? Some oft-forgotten lackey at SHIELD with too much knowledge and savant-like skills with the mainframe?

Will Mike or Deathlok prevail in the battle over Mike’s soul and sanity? Does the weaponization of Deathlok mean the end of SHIELD and the beginning of Super Soldier Central?

How can Coulson mistrust May so quickly? I thought that was a little out of character, but I guess it makes for good TV. I can’t wait for next week’s episode, “Turn, Turn, Turn.”

What did you think of the episode? Leave thoughts below.