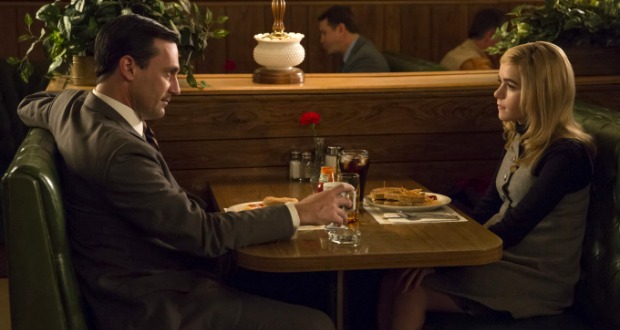 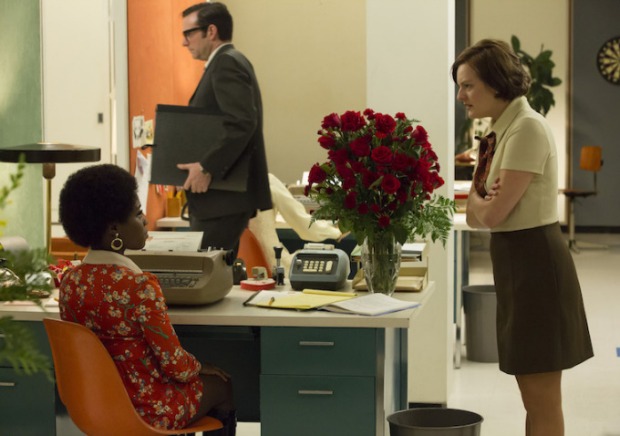 This week’s “Mad Men” episode, “A Day’s Work.” was exceedingly satisfying, for all sorts of reasons, one of which is that Megan doesn’t appear in it, except in name only.  I’m one of those fans that will never quite come to terms with the character Megan. She’s striking, of course. Standing next to Don Draper, they’re a visual match made in heaven. And I will admit she sometimes has a sweet side. But she has always seemed more an idea than a fully wrought character — woman as tabula rasa second wife, woman as careerist first and foremost — and her petulant streak makes me want to roll my eyes and, if I’m lucky to have one on hand, throw a highball at the screen. When Sally, sitting across from her father in a booth in the roadside restaurant near the end of this episode, asks her father if he still loves Megan, I’m actually rooting for him to say, “No, I do not.” But he claims he does, and that he visits her in L.A. every few weeks, and that they speak all the time.

Zut alors. While I’m venting, I’d like to get one more thing off my chest, another “Mad Men” vexation, something else I can’t quite accept. I think AMC’s decision to split the final season into two, and to ask viewers to wait nearly a full year to watch the remaining seven episodes, was a huge miscalculation. Perhaps the shirts thought they’d get more viewers, and maybe they will, but this approach is like having to take a one-week vacation when you’re used to two. It’s going to be over in just over a month (stomp, stomp) and then we go back to “Mad Men” hiatus. Does this altered UX – or user experience, if I can borrow a term from the digital crowd — make sense? I feel cheated. Support for this in the comment culture is nil. One commenter suggested that AMC air the last 14 episodes one episode one year at a time for the next 14 years, so we could discuss how the show was going to end for that long. Funny, that. I wish the writers would get meta on us, and have Don order a Seven and Seven.

Oh, and speaking of “Mad Men” last wishes. I wish we’d get to see Sal Romero one more time. There’s practically a miniature cult among “Mad Men” fans that wishes as much. Someone asked the panel at the PaleyFest last month, and Jon Hamm very much left open the possibility, in a generalized, non-spoiler fashion. Fingers crossed!

So, this episode. The firm certainly is screwing with Don Draper. No return date. Minimal official contact with colleagues. He has to get intel from Dawn. (Who isn’t terribly detail oriented, which could bode problematic for developments in the secretarial pool.) A contract with a no compete clause, as he notes over lunch with a fellow ad man. And they’ve put a new logo on the door. CSP. No D for Draper. That is just huge, a logo is a firm’s statement to the world, and I don’t understand why more people aren’t talking about this development this week on the heels of the show. (In fact, I’m kind of wondering if this isn’t a recap scoop.) I’ve asked a few friends who also watch “Mad Men,” and it didn’t register as a signifier. The new logo suggests that Don’s position at the firm is truly over. As does Ken Cutler calling Don an ex-wife still collecting alimony. (Ouch.)

As for other workplace happenings, big developments in the secretarial pool. Lou Avery demands to have his own girl after Dawn is not there when Sally Draper comes to what she thinks is still her father’s office, putting Lou very much on the spot. Sally’s come to the city for the funeral of a classmate’s mother, leaves her wallet at a restaurant, and goes to her father’s office. Dawn is not at her desk because she’s buying Lou’s wife a Valentine’s Day gift. Lou’s fed up with dealing with Dawn dealing with Don. Dawn sticks up for herself – she really speaks truth to power — but Lou’s order stands. So Joan puts Dawn at the receptionist desk. And moves the ditzy secretary to Lou.

The change, with Dawn in the reception area, the spot Megan Draper first held when she was introduced in season four, prompts Bert Cooper to order Joan to remove Dawn from the receptionist’s desk because people can see her there. Bert, an established Republican, also turns out to be a racist. Stunning. And surprising. But we move on when Joan ends up moving upstairs, at Ken Cutler’s suggestion, and Dawn assumes an HR role. This is one of those moments where I appreciate the writers taking the long view. In season five, Joan had put Dawn in charge of the timecards as a punishment after she’d punched another secretary’s card, even though that secretary (Harry’s) had left hours earlier. So Dawn has a tad management experience.

Poor Peggy. It’s never fun to be single on Valentine’s Day, but she’s so lovesick over Ted she’s delusional. She looks awful, pudgy and pasty. She assumes a vase of roses that have been delivered to the office are for her. There’s no card. She takes that to be a sign that they’re from Ted. She leaves him a bizarre message. But the roses were sent to her secretary Shirley, who’d removed the card. Shirley tells Dawn she’s not comfortable asserting herself and telling Peggy they’re hers. Goodness, I wish Peggy would meet someone and get over Ted. Who is sulking around L.A. in a low-ceiling office. Perhaps his mood is a harbinger that his marriage is ultimately doomed. Or maybe he’s just regrouping.

Pete has a great moment in Ted’s office. There are bicoastal tensions over handling the Southern California Chevy car dealers association, an account Pete has landed, with New York insisting that the deal get Detroit’s blessings, which would mean Pete having to deal with his nemesis Bob Benson. Pete sits on the couch in Ted’s office and gets all existential in one of those frisson moments where your interior monologue declares that this is fine TV. Ted’s not up for deep conversation, and tells Pete that’s what the money’s for.

The focal point of this episode is Don and Sally. What transpires is actually quite beautiful, because it suggests that Sally is open to accepting her father for who he is, which is precisely what Don Draper/Dick Whitman has been seeking his entire life. Don Draper never gave anyone the chance, probably because he did not feel worthy of anyone’s love in the traditional sense. After Sally discovers that her father is not at the office, she goes to his apartment. She explains the situation, and Don offers to give her a ride back to school. (Choate, which is in Wallingford, Connecticut, so perhaps a two-hour drive from Manhattan.) At first she refuses, tells him she’ll catch the train. But he insists, and she accepts. In that special intimacy of the contained space of a car, they spar over her version of what brought her to New York, which infuriates her because of his history of lying. And she points out how hard it was for her to come to his apartment, because she might run into that woman, referring to Sylvia, and have to stand in the elevator and, great detail this, “smell her hairspray.” It’s a moment for Sally, to reveal her vulnerabilities to her father, something she hasn’t done since she was much younger, before Don and Betty separated.

And I love the moment in the roadside diner, when Don jokes about leaving the place without paying. I was so happy to see this, because I’ve long wondered why Don Draper wasn’t more of a joker. We never see him crack up, he laughs socially but never primally. I’d love to see that man laugh more.

When Sally says good-bye to her father, she tells him she loves him and wishes him Happy Valentine’s Day. It’s positively poignant.

I’ve been thinking about Don misrepresenting his work situation to both Megan and the children. It’s not the old Don Draper, lying grievously to perpetuate an assumed identity or to cover for his womanizing. These are altruistic lies. I assume he isn’t telling Megan because he knows that would throw off her career ambitions. And not telling the children, and Betty and Henry, makes sense, because why worry them? So,  two episodes in, Don’s not womanizing, he’s not lying along the same lines. But he is still drinking, though he seems less “bingey” than last season.

Apologies for not posting this and last week’s sooner. I work in an office these days. It’s made me appreciate how superbly “Mad Men” captures office dynamics and sensibilities.