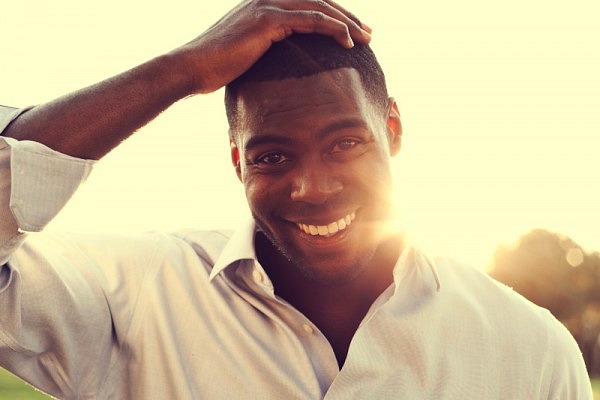 Whether “Shameless” is or isn’t his “big break,” this 6’6″ actor loves what he’s doing and plans on having a long career, one that started as a body double for various NBA stars, including LeBron James, in more than 40 national commercials. He’s often referred to as “the man who gets paid to be LeBron James.”

“LeBron James is a talented guy and I appreciate everything that’s come out of the work I’ve done as his double,” he says, “but I’m ready to be a separate entity.”

Bailey almost had his own basketball career ahead of him when he was younger. In Fayetteville, North Carolina, he quickly became an all-star basketball player and was ranked in the top 30 nationwide by age 16.

“But I was also into theater since elementary school,” he says. “When I first did it, it was exhilarating and fun. I was blossoming as an athlete at the same time, though. I took drama when I went to high school, and when I had opportunities to work on plays after basketball, I would.”

After reading the book “Shaq Attaq!: My Rookie Year,” by NBA legend Shaquille O’Neal, who was also making a name for himself in films and television, Bailey said he realized that he could do all of the things he wanted to do too, until a knee injury sidelined his career.

Today, he co-stars opposite Emma Greenwell (Mandy) and the Emmy award-winning William H. Macy on “Shameless.” “William H. Macy and Emma are some of the nicest, fun-loving people,” he says. “The number one thing I keep in mind with this role is being prepared and going in and doing my job. They both come in with their A-game, and I don’t want to come in looking flat.”

Bailey says that his intimate scenes with Emma were a little awkward at first. “When the cameras are on you and everybody in the cast and crew are around, it can be a little nerve-wracking,” he says.

He’s excited about what is going to happen next and says he would love a lead television role and a long career like his favorite actors have had. He admits to being an Arnold Schwarzenegger super fan and admires Wesley Snipes’ film career. “Snipes was always amazing,” says Bailey. “He was a very talented and serious actor, and many people seem to forget some of his more serious roles — “Blade” and “White Men Can’t Jump” — and I always thought the world of him when I was growing up.”

Today, Bailey is working hard at his own career and being a single father to his 7-year-old son. “I’m really focused and I have a system that seems to work, including a really good babysitter,” he says.

Diamond Shel’s poetry video about following your dreams and handling business while raising your child.

When he’s not busy with daddy duties and his acting schedule, Bailey makes sure to give back to such charities as the SOS Children’s Villages and the She Cares Foundation.

“It was part of my goal that I wanted to use whatever celebrity and fame I got to help people,” he says. “My grandmother instilled that in me early. She was a minister and she would help those in nursing homes. I remember growing up that my friend’s house burned down and she would have the family stay with us and she gave them my clothes. That stayed with me.”

Check out the official “Shameless” website, and click the images of Sheldon Bailey below for larger views and sharing options.