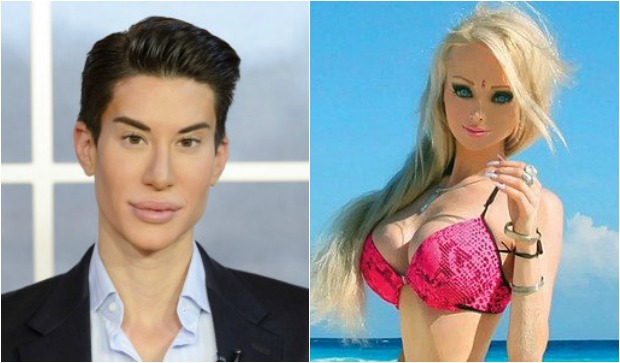 Ever wonder what Ken and Barbie would look like as humans? Me either. But apparently, there are human versions of the vintage dolls walking around, lying on the beach, listening to their transistor radios, and lounging in their Dreamhouses.

But there’s trouble in paradise!

Justin Jedlica, who underwent approximately 140 surgical procedures to look like Ken, didn’t exactly have the nicest things to say about Valeria Lukyanova, who has transformed herself to look like a spitting image of a real-life Barbie doll.

“We met at a photo shoot. She’s a cute girl,” Jedlica told GQ, adding, “I don’t really get her. I don’t get why people think she’s so interesting. She has extensions. She wears stage makeup. She’s an illusionist.”

At any rate, Jedlica has his favorite body part since becoming Ken. “My baby is my shoulders, because nobody has anything like them,” he says. “I divided these so there’s six pieces—front, middle, and back. Just like the actual anatomy … I’m working with a silicone-fabrication company to do an artistic muscle-augmentation-implant line. So all the implants I’m paying custom for myself right now, like my shoulders, my quads, my abs, the lats … they’ll hopefully be available to plastic surgeons.”

This isn’t the first time Human Ken has slammed his other half. In November, the 33-year-old took photos of himself mocking Human Barbie and comparing her to a “drag queen.”

“Valeria presents herself as a real-life Barbie doll, but she is nothing more than an illusion who dresses like a drag queen,” he reportedly said. “Unlike me, who has spent nearly $150,000 permanently transforming myself into a human Ken doll, Valeria just plays dress up. But as soon as you wipe away all that makeup, she’s just a plain Jane and there’s absolutely nothing special about her.”

But why the anger, Ken? Take a chill pill and go for a ride in the Beachcruiser.