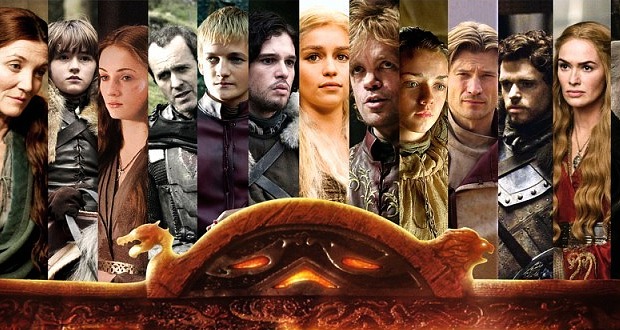 Get ready for more scheming,  violence, gore and sex when “Game of Thrones” premieres Sunday, April 6 at 9 p.m.

To celebrate the fourth season premiere of the epic fantasy series, HBO will screen marathon sessions of all three previous season episodes this weekend, which began this morning at 9 a.m. All ten episodes of each season will be played back to back, twice, for 60 straight hours. The screening of the final episode of season 3 will end in time for Sunday’s premiere of the new season.

Season three concluded with the Red Wedding massacre, which shocked everyone when Rob Stark (Richard Madden), one of the lead romantic characters, was brutally murdered. It proved that any of the characters in the show, based on the George R. R. Martin book series “A Song of Ice and Fire,” could be killed off at any time.

The opening season of series four introduces a new character, Oberyn Martell (Pedro Pascal), who shows up at King’s Landing for the wedding of the narcissistic and cowardly Joffrey Baratheon (Jack Gleeson) – the character everyone loves to hate – to seek revenge against the Lannisters for killing his sister in some past civil war.

John Snow has left Ygritte (Rose Leslie), who is furious, to prepare his people for battle with the Wildings, a particularly brutal people who include cannibals in their army.

Daenerys (Emilia Clarke) and her dragons are at the center of the action this season. The dragons are getting bigger and are no longer  cute. They also misbehave. But Daenerys has other concerns; she’s got an army to get together but finds time to flirt with a hunky mercenary.

Click the images for larger views and sharing options.

At the premiere of “Game of Thrones” in Manhattan recently, I teased some season four details out of the actors and the author, who dodged spoilers but offered some tantalizing hints about what was in store for their characters:

ROSE LESLIE (Ygritte): Is Ygritte’s love affair with Jon Snow (Kit Harington) over? Last season your character shot three arrows at him that left him badly wounded, but you could have killed him if you wanted. Will you soften towards him and get back together?

“No! She’s angry and feels like she’s got nothing to lose. She believed everything that Jon Snow was telling her, and she felt like they were going to have a life together. Of course that did not work out, so she’s now on a one-track mind and one-track mission to get back.

“We pick up with the character of Ygritte being a very different woman now. She’s far more feral. You see a far different side of her than we’ve never seen before, and she’s a ruthless killer this season. Whether she and Jon Snow have another encounter again, we’re not sure.”

EMILIA CLARKE, (Daenerys Targaryen): How worried are you about the dinosaurs? They are getting bigger, and you’re having a harder time controlling them.

What is your character going through emotionally this season?

“She’s on a roller coaster. You think she’s up, and the reality is that she’s actually emptier than she ever thought she could be. Every season brings new problems that she has to deal with. A lot of them have been physical, but now for season four, they seem to be mental and emotional as well.”

GWENDOLINE CHRISTIE (Brienne of Tarth): What’s in store for Brienne? (Christie – who is 6’3″ – wore towering stilettos that added another 5 inches to her height. She looked the most unlike her character, the plain and dour Brienne of Tarth, a warrior with herculean fighting skills and a sharp mind and tongue.)

“Season four, structurally, is so different from the first three series. They have been a slow build and then a climax. Season 4 is very, very explosive and we continue to see this fascinating journey of a woman placed in situations she can never expect, that she’s not familiar with, that she doesn’t naturally know how to navigate. We see her bloom and change and evolve, and we also see her experiencing her greatest hardship yet.”

CARICE VAN HOUTEN (Melisandre): What is the most challenging part about playing Melisandre?

How do you find your way into the character?

“People have told me in my life they can never really read what’s happening (with me). There’s something behind my eyes, and they don’t know what it is, and I think I guess I can use that in this.”

What’s in store for your character?

SIBEL KEKILLI (the German actress who plays prostitute Shae): Talk about your character and your relationship with Tyrion Lannister (Peter Dinklage).

“It’s like Romeo and Juliet. They want to be together. She’s not afraid of any man or any woman, and she’s not interested in money. Maybe at the beginning, but not any more. She fights to protect women, even Cersei (Lena Headey). I think she’s a feminist, yes, but sometimes she should think first before she talks. It gets her in trouble, all the time.”

Will Shae’s relationship with Tyrion change?

Is there a power play going on between them?

“Of course, as always between them.

“I hate him. [laughs] No, he’s really, really lovely. He’s not one of those actors who looks in a mirror and goes, ‘How do I look? Am I looking good?’ They don’t act with you, but Peter is the other kind of actor. They are acting with you. He’s acting with his eyes.

How did you feel about all the sex scenes you’ve had to do?

JOHN BRADLEY (Samwell Tarly): What’s in store for your character in the new season?

“At the start of season four, he’s been on this incredible adventure. He’s achieved things he thought could never be achieved and he’s battled the odds for a couples of seasons now, so you’d think in the face of that he’d have a bit more self esteem than he’s ever had before. Sadly for Sam, self esteem isn’t something that he comes across very easily, so you can still find him with a lot of self loathing, a lot of self doubt, just in slightly different areas than before really.”

What do you draw on for your character?

It’s a very, very comfortable place to go to actually. I mean, in the show, and the world really, it’s all about subtext and all about ulterior motive and people saying one thing but meaning another. It’s a very, very nice place to go to and have somebody so simple, with such simple needs and simple wants. He doesn’t want the throne, and he doesn’t want a lot of materialistic possession. He just wants a bit of happiness, really, and I think people can relate to that.”

FINN JONES (Loras Tyrell): You and Cersi (Lena Headey) have some interesting scenes with each other.

“There’s a lot of sass going on. We challenge each other to see who can out-sass each other. We’re both people that are kind of, I think, torn by what our families tell us to do, so I think we have that in common … I’m one of the last standing good guys, so pray for him to continue to live in this world.”

What has been the most surprising thing you’ve had to do?

“I’ve had to have sex with a ton of guys, that’s pretty surprising. Having sex with some guys in front of a lot of people … that’s a bit odd, yeah, probably that.”

GEORGE R.R. MARTIN (author of “A Song of Ice and Fire,” the epic fantasy series on which “Thrones” is based): Are the actors the way you envisioned them when you wrote the books?

Peter physically is not the way Tyrion is described. He’s taller and considerably better looking, but he’s captured the character perfectly. No one else could possibly have played Tyrion.

You’ve said Tyrion is your favorite character and how well Peter Dinklage inhabits that role. Does that mean he’s won’t get killed off? Will the way you feel about the characters affect how you end the book?

“It hasn’t changed. I’ve been living with these characters since 1991, so they’re pretty well fixed in my head even before the show.”

You’ve published five of the proposed seven books. It’s possible by the 2015 television season the show could overtake the books. How much pressure do you feel to hurry up and finish writing?