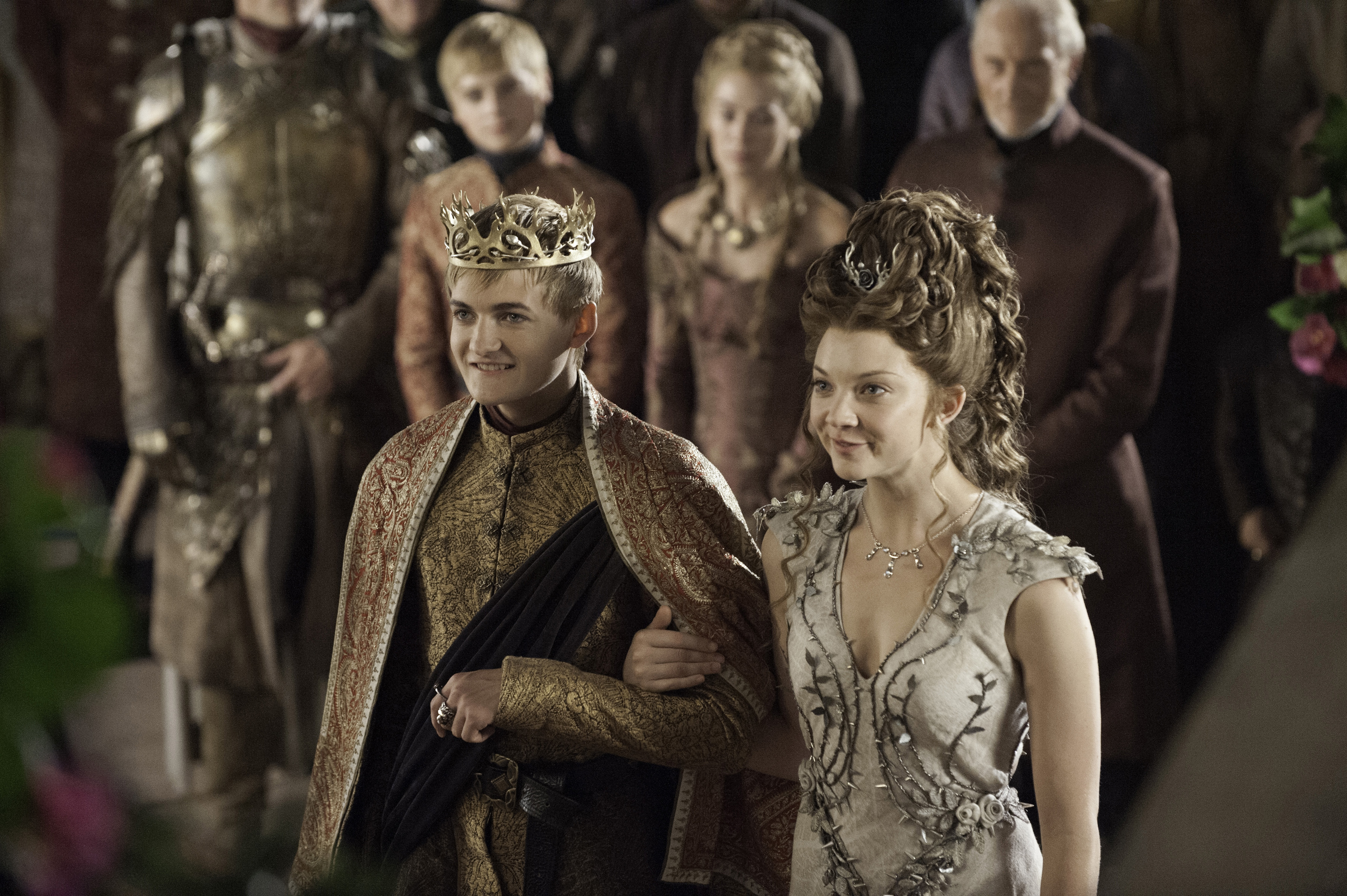 Well, it’s time for another wedding in Westeros! This time it’s the nuptials of King Joffrey and Lady Margaery (the Purple Wedding). Of course, like the Red Wedding, nothing ever seems to go as planned. This particular episode was written by “Game of Thrones” author, George R. R. Martin, himself.

First off, we find the sadistic Ramsay Snow on a fox hunt, of sorts. The fox, in his case, is a woman, and now that he has broken down Theon Greyjoy, he has to satisfy his vicious tastes elsewhere. Greyjoy, or Reek, as he is now known, watches in anguish and torment as Ramsay literally releases the hounds on the poor woman.

Yet, even as cruel and atrocious as Ramsay is, he still seeks his father’s approval and almost doesn’t get it after Roose Bolton sees what has become of Theon Greyjoy. Fortunately, for Ramsay, he demonstrates Reek’s loyalty to him and impresses his father. 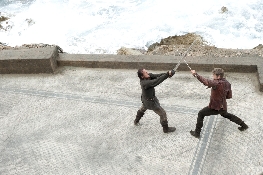 Meanwhile, in a wintery forest somewhere, Bran is tripping the light fantastic through his direwolf, Summer. Enjoying a dreamy Weight-Watchers fantasy meal (fulfilling yet zero points!), Bran is pulled back to reality by Hodor. But Summer leads Bran to a tree where he has a vision, a vision that will lead them onto their next journey.

After Jaime confesses to Tyrion that he can no longer fight, Tyrion lends him a hand (wokka, wokka) by offering the training services of Bronn, who looks like he’ll literally become Jaime’s right-hand man (I’m here all week!) as he helps him train with his left hand in secret.

There’s the whole bizarre Melisandre storyline which I don’t quite follow and right now, doesn’t seem to play a huge part in the overall story so we’ll put that on the side burner and let it stew.

We soon find out the second smaller sword of Valyrian steel goes to King Joffrey as part of his many wedding gifts. Hoping to imbue his nephew with the power of knowledge through reading, Tyrion gives Joffrey a beautifully inlaid book of the history of kings, which ol’ Joff promptly slices up with his new sword. He gets his digs in at Tyrion whenever and wherever he can, taking stabs at Sansa also, for good measure.

While Ser Loras and Oberyn make googly-eyes at each other, Jaime warns Loras off Cersei while Cersei warns Brienne off Jaime, calling Brienne out on her love for him (though clearly their relationship goes beyond romantic love, per se).

Podrick Watch! There was a comedic moment in the episode when Podrick passes by a contortionist and keeps turning to look at her in fascination as he follows Tyrion through the wedding feast. Or is he checking out Oberyn? 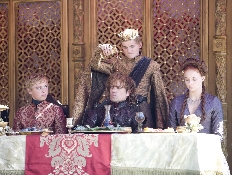 Recognize the actor who plays Grand Maester Pycelle? That’s Julian Glover – he played the villain in Indiana Jones and the Last Crusade (the one who drinks out of the false Holy Grail). What a transformation! 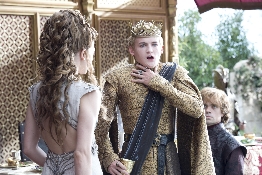 Unfortunately for Joffrey, it’s the last drink he’ll take as he starts to choke and asphyxiates on the poisoned drink. The motley fool, Ser Dontos, leads Sansa away as Cersei calls for the guards to take Tyrion into custody as he looks to be the guiltiest party at the feast.

While I’m sure everyone is rejoicing Joffrey’s death, it was a bit anticlimactic for me. I wanted Joffrey to go down in a big blaze, swords running him through and through. Everyone who has hated him getting a chance to exact a little revenge on the mean and heartless twit. But he’s dead, so there’s that, and now who are we going to turn our hatred toward now?

Thus begins a game of Clue as the mystery of Joffrey’s death begins to unravel. Was it Dontos the Fool in the Garden with the Poisoned Cup of Wine? Perhaps it was Oberyn Martell with a wrench (and a wench)? Maybe Melisandre with a voodoo doll and a curse? Or Colonel Mustard in the library with the candlestick?

Next week deals with the aftermath of Joffrey’s death. Will he lie in state? Who takes over now? Will the incestuous Cersei and Jaime try to create another heir to replace Joffrey? (Ewww, let’s hope not.)

It was recently announced that Game of Thrones was picked up for a fifth and sixth season after the spectacular ratings they received with the Season 4 premiere. So yeah to more death, destruction and dragons!

Your thoughts? Leave comments below.