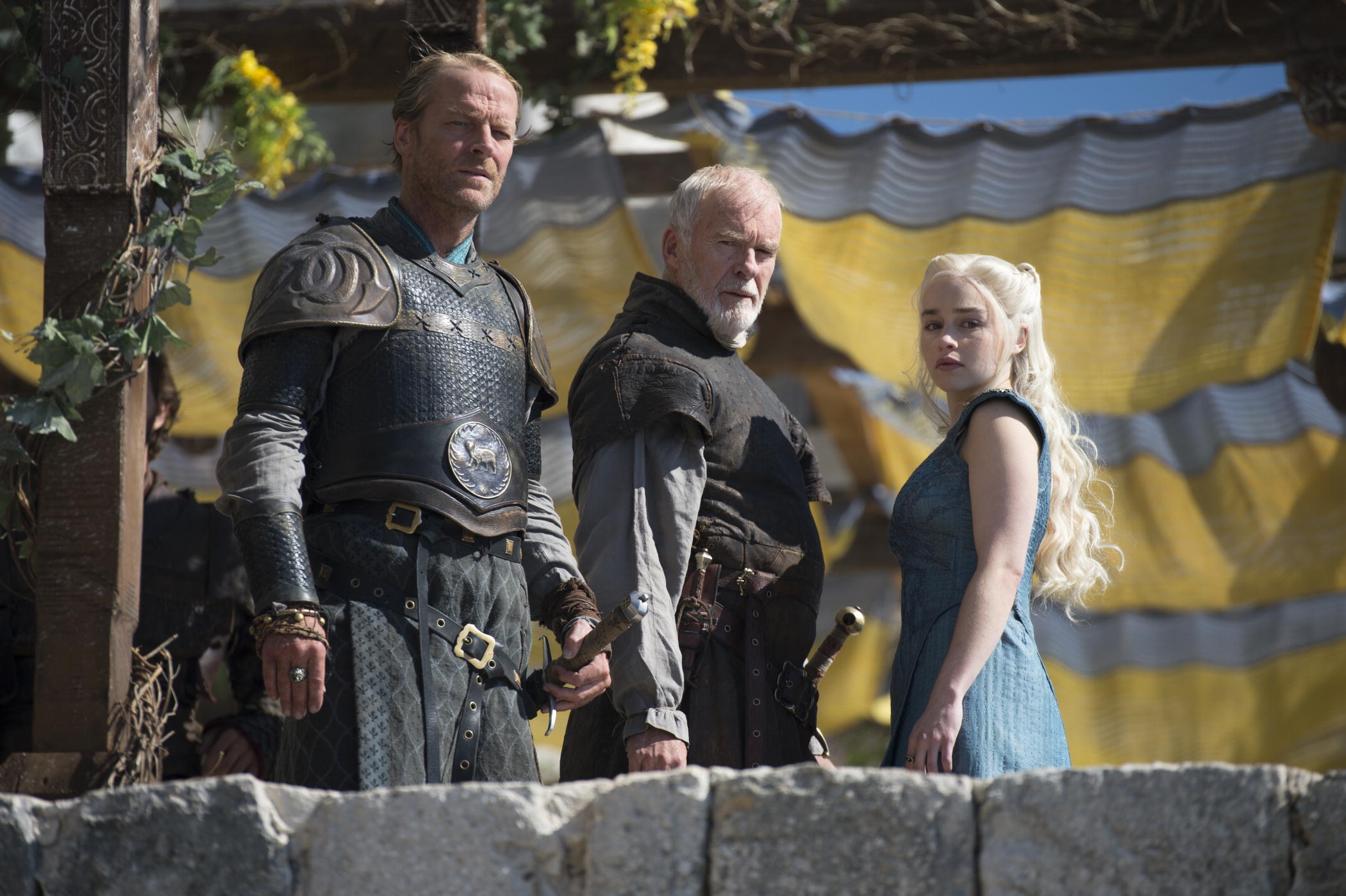 Okay, so I’m not a lyricist, but this week’s “Game of Thrones” episode, “Oathkeeper,” focuses much on Jaime’s dilemma between right and wrong and whether our favorite Kingslayer will err on the side of good or take a walk over to the bleak darkness. 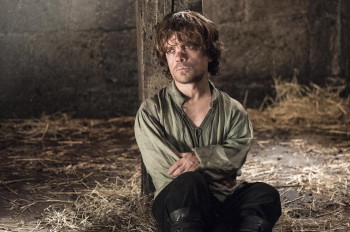 But let’s start off with Daenerys and company. Grey Worm (Jacob Anderson) is getting English lessons from Missandei (Nathalie Emmanuel) but I don’t think Grey Worm cares a lick about his Rosetta Stone lessons. He’s really more interested in spending time with Missandei and is probably using this as a guise to do so. Of course, he most likely got some pointers from Daario that he had to test out, so we’ll see how that relationship progresses. #MissWormShippers

Dany has Grey Worm and a few Unsullied infiltrate the keep. “Have fun storming the castle!” she says as they find the slaves and challenge them to fight for their freedom. Grey Worm reminds them they outnumber their masters three to one. Plus, a cache of swords and other weapons help rally them on.

Once they have gathered all the masters, Dany decides justice must be served and has (presumably 163 of) the masters crucified, one for each dead slave child that they put as mile markers for Dany and her troops to pass by on their way to Meereen. Barristan Selmy advises against this and thinks she should show mercy. Dany, on the other hand, believes her approach is the best way to get the message across. #EyeForAnEye 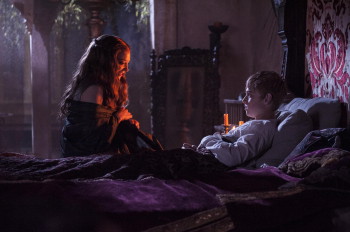 Meanwhile, over on the good ship L̶o̶l̶l̶i̶p̶o̶p̶  Littlefinger, Sansa learns that Lord Baelish was the instigator in Joffrey’s murder and that the necklace Ser Dontos gave her had a hand in it all. Subsequently, Lady Oleanna (Dame Diana Rigg) reveals to Margaery that she probably, literally, had a hand in poisoning ol’ Joff.

She also tells Margaery she needs to make her moves on tween king Tommen before Cersei poisons him against her. Her recommended method? Seduce him just as Oleanna seduced her husband away from her own sister after she decided she did not want to be betrothed to a Targaryen. Tommen totally agrees to the secret slumber parties Margaery has in store for him. #Cougartown

Over at Castle Black, Jon Snow is butting heads with acting Lord Commander Alliser. Alliser is warned that if he’s not careful, he’ll soon be following Snow’s orders instead of giving them to him. So, Alliser does what any power-hungry superior does, he sends Snow on a fool’s errand to capture/kill the mutineers at Craster’s Keep. Jon’s able to con a few unsuspecting Watchmen to join, including Locke. Remember, Locke is that untrustworthy fellow who almost raped Brienne and lopped off Jaime’s hand. It’s more than likely he has a whole other agenda for Craster’s Keep. #RutRoh #SnowyLips 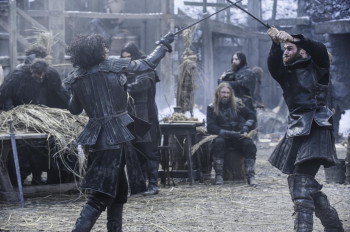 Bronn and Jaime are practicing their swordplay in their private cove by the bay when Bronn underhandedly knocks Jaime off his feet with his own metal hand. After learning that Jaime has yet to visit Tyrion in the dungeons, Bronn shames him into it. #PunIntended

Jaime finds himself in a quandary. How can he possibly help his brother Tyrion without committing treason when his sister demands Tyrion be killed for Joffrey’s murder?

Cersei gives him the major cold shoulder after last week’s “encounter” as Joffrey’s body laid in state. She questions his loyalty – would he obey her if she demands he find Sansa and bring back her head, or would he honor his oath to Catelyn Stark to return her daughters safely? Jaime never answers, but when he defends Tyrion’s innocence, Cersei dismisses him coldly and formally. 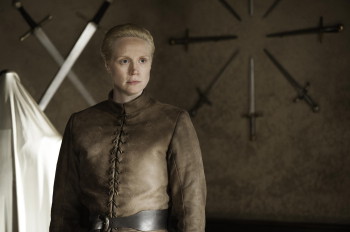 Reminding him of his oath, Jaime tasks Brienne with ensuring Sansa’s safety. He bestows upon her the Valyrian steel sword Lord Tywin gave him as well as a glorious suit of armour (he guessed her measurements? Hmm.) With the suit of armour and the fancy schmancy sword, she only lacks one thing to becoming a true knight – a squire. Guess what? Jaime has one more gift for Brienne: Podrick. #CerseiBackfire

Yeah, there’s more Podrick to be had! Wokka, wokka! Jaime offers Podrick up to Brienne as her squire. She doesn’t want him at first, but then Jaime appeals to her chivalrous and merciful nature. He tells her if she doesn’t take Pod he’ll surely be killed if he stays in the city because of his association with Tyrion. With that, she relents to a visibly overly excited Pod. Bronn gifts him an axe from Tyrion and the two set off on their road trip. #PodWatch

Jaime and Brienne share a touching moment before she leaves, with Jaime asking what she’ll name her sword. “Oathkeeper,” Brienne answers. Jaime watches them depart King’s Landing with an “If she turns back and looks at me, she likes me” thought running through his head. Lo and behold, Brienne turns and looks back. #BraimeShip. 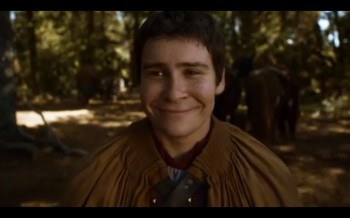 I find it funny that all the men, even the hardened Bronn, refer to Brienne as a lady while the women of Westeros call her anything but.

Of course, this new adventure possibly sets up a new pairing for #GoT shippers – #BrieDrick, anyone? (Cue R. Kelly’s “Bump and Grind” song – ♫ My mind is telling me no but my body’s telling me yes…♫)

I love that the character of Jaime Lannister is so complex – you want to hate him for his villainous ways and his incestuous relationship with Cersei, yet you like him because he’s saved Brienne’s butt many a time and he honors his oaths, even if it is to a family member of his sworn enemy. And while he killed a king, he did it to save scores of innocent people. In this episode, it appears he’s leaning toward what’s right – after all, he chose Brienne and his oath over Cersei and her vengeance. What’s a fan to do? #sigh #JaimeGood #JaimeBad #ILoveJaimeNoMatterWhatHeIsDelicious 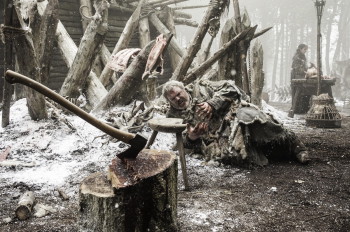 Team Hodor find themselves at Craster’s Keep after they hear a wailing baby and Bran wargs to find the source. Instead his direwolf finds Ghost (Jon Snow’s direwolf) caged and then is caught in a trap himself. As they go down to rescue both wolves, they are captured by the mutineers and poor Hodor is chained up like an animal.

We later see the baby being taken by a White Walker and placed in their icy version of Stonehenge. Another White Walker picks up the baby and touches him, causing the baby’s eyes to freeze over… What?! Did he just make a Baby White Walker?!

What’s to happen next? What did you think of this episode? Tell us your Top Three characters on “Game of Thrones.” Tweet us @BeTheBuddha and @ReelLifeJane with your thoughts!