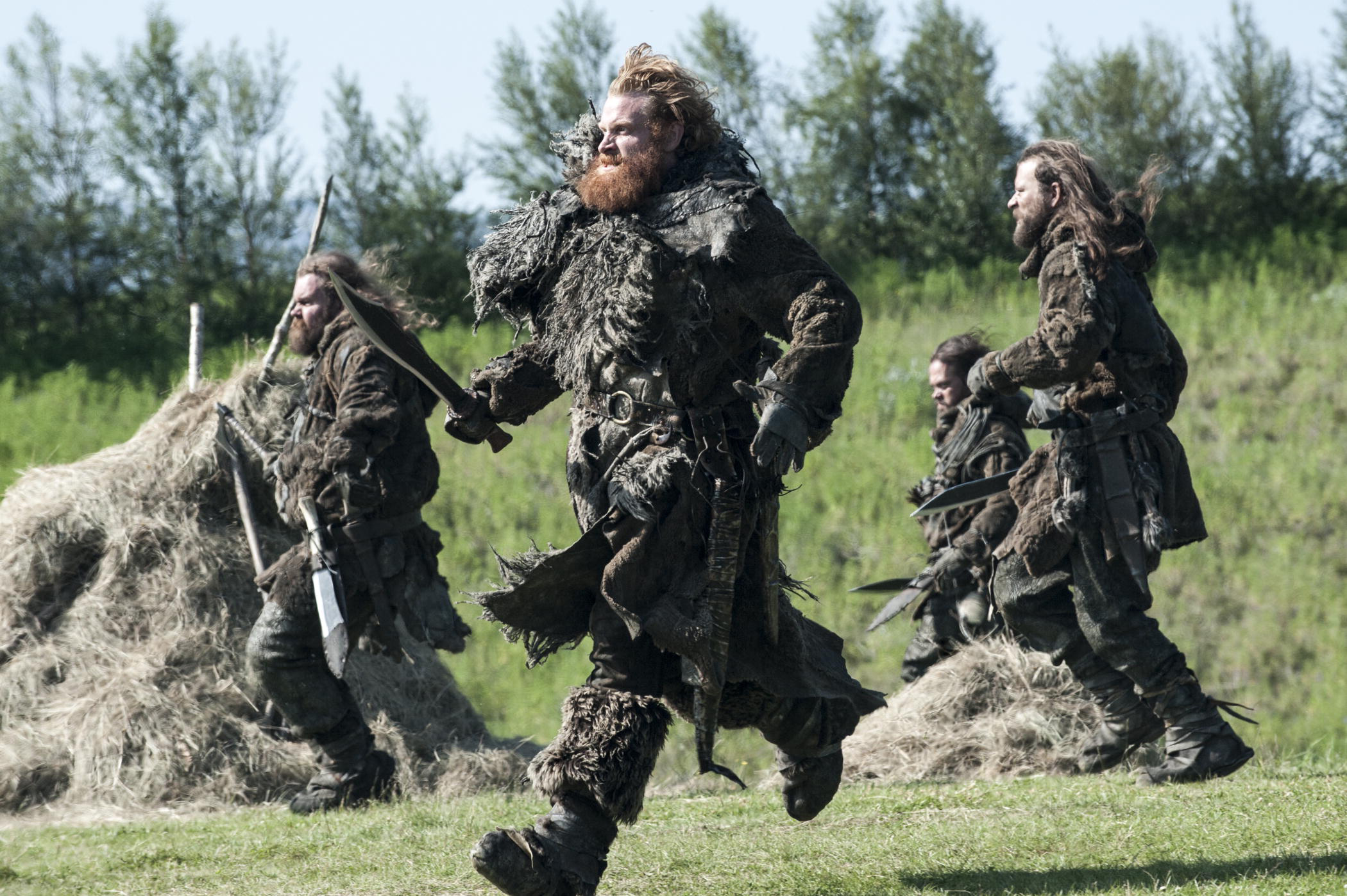 In the aftermath of Joffrey’s assassination, Tyrion is taken to the dungeon and Sansa escapes the city with Ser Dontos the Fool. Luckily, they are able to exit the city by the sea in a small rowboat while the kingdom is in disarray following Joffrey’s death. Dontos rows, rows, rows his boat gently down the sea to what can only be described as a pirate ship in the foggy night. I thought, for sure, Captain Sparrow would be at its bough looking yonder.

Instead of Johnny Depp, we find that Lord Baelish (Aiden Gillen) is commanding the ship. He promptly has Ser Dontos killed (Oooh!) instead of paying him the agreed upon fee for bringing Sansa to him. He also reveals that the necklace she wears from Ser Dontos is a fake and supplied by Baelish and that he was behind Joffrey’s murder.

So what is Lord Baelish up to? Does he want Sansa for himself? He basically explains his reasoning behind killing off Dontos is that “Dead men tell no tales.” I think there might have been a Jolly Roger flying up on that ship.

Meanwhile, Margaery isn’t mourning the loss of her newfound husband. She’s lamenting the fact that she technically isn’t a queen, as they didn’t have a chance to consummate the marriage. She whines to her grandmother about her deceased husbands – the first one preferred men over women, the second one liked to torture and kill animals for pleasure. (Aww! Poor baby.) Her grandmother concedes that the next one should be easier. Third time’s a charm, Margaery. Third time’s a charm.

As Joffrey’s body lies in state, we are introduced to his little brother, Tommen, who immediately seems to be kinder and gentler than Joffrey. But hey, he’s a Lannister and with the influences of Cersei and grandfather Tywin, he probably won’t be kind and gentle for long. As Tywin leads Tommen out of the chambers while explaining the birds and bees to him, Jaime enters and sends everyone away so he can have a moment alone with his sister.

Certain Tyrion is the murderer, Cersei wants Jaime to avenge Joffrey by killing him. Jaime seems a bit appalled that Cersei would even ask such a thing, seeing that Tyrion is their brother. As she cries for her son, Jaime wraps his arms around her at first only to comfort her, but then things go a little sideways when they start kissing each other passionately. (Eww!) Cersei pushes him away, but Jaime isn’t going to take no for an answer this time and forces himself on her (Double Eww!) over their dead son’s body.

I knew this guy was bad, but I guess I had to be reminded of it after he kind of redeemed himself last season with his Two for the Road escapades with Brienne. He might have some good qualities hidden away, but it seems he’s not at the core.

Meanwhile, Arya and The Hound continue on their road trip. They befriend a kind farmer and his daughter who offer them shelter from a storm. Arya has learned to lie like a champion, giving the farmer a well-spun tale.

As the farmer says a longwinded prayer before dinner, The Hound has little patience and pours himself a generous serving of rabbit stew, stunning the farmer and even Arya with his lack of manners. Arya gulps down some stew and you think she’s about to let out a loud belch, but she holds back.

When the farmer offers The Hound a chance of “fair wages for fair work,” and The Hound agrees, even Arya is surprised, but come morning she isn’t surprised that The Hound has hurt the farmer and stolen his silver. This infuriates Arya, but as The Hound quickly explains to her that he sees the world for what it is and, “How many Starks they got to behead before you figure it out?” This shuts Arya right up.

Podrick Watch! Podrick visits Tyrion in the dungeons, bringing him some contraband snacks – cheese, almonds, and sausage. I’m guessing Tyrion is doing the Atkins diet with all that protein. We learn from Podrick the trial will be in a fortnight and he will be judged by Tywin, Mace Tyrell, and Oberyn. It’s the most we’ve heard Pod speak in the entire series so far.

Tyrion, surprised no one can find Sansa, doesn’t believe she killed Joffrey. Once Tyrion finds out Podrick has been approached by the “ominous they” to flip on Tyrion with promises of a knighthood and that Pod declined, he orders Podrick to leave King’s Landing. After all, playing nice never gets anyone anywhere in Westeros, it seems.

It’s the only heartfelt moment in the episode when Podrick gets a little choked up saying his farewell to Tyrion.

Is this the last we’ll see of Podrick? Say it isn’t so! I noticed Podrick was wearing a red cape. Superman wears a red cape. Maybe…? Hmm…

Daenerys finally makes it to Meereen, where she is basically laughed at by the city’s lords and ladies. They send the town’s champion to fight one of hers. As she denies each of her leading men (Grey Worm, Barriston Selmy, and Ser Jorah Mormont) the chance to be her champion, she does allow Daario to take the pole position. When Daario takes down Meereen’s champion without breaking a sweat, Dany gives him a hot, “I want you. Now.” look, much to the friendzoned Jorah’s dismay. I half expected to see Ser Jorah Mormont throwing a fit in the dirt, “Khaleesi, why didn’t you pick me?! I could have done it just as cool as he did! Waaaa!”

She speaks to the Meereen slaves, offering them freedom if they follow her into battle. As Dany’s forces fling barrels from the trebuchets, you think at first it would be filled with flammable liquid that the dragons will light ablaze, but instead it’s full of slave collars and shackles from all the slaves they took down and buried at each mile marker as they made their way toward the city. I’m guessing I know how this is going to go…

Stannis Baratheon thinks voodoo magic was integral in causing Joffrey’s death, but refuses to pay for an army to help fight for him.

Sam takes Gilly and Sam Jr. to the local village in order to keep Gilly safe from the rapists and thieves that make up the Night’s Watch. Every time I heard Sam say “Gilly” I could only picture Will Forte say “Gilly?!” in the SNL skit with Kristen Wiig as Gilly.

The Wildlings and the cannibalistic Thenn pillage and plunder a village. The lead Thenn tells a little boy he’s going to eat his mama and papa and allows the boy to flee so he can tell the Night’s Watch. With only about a hundred men at Castle Black, Jon Snow knows they don’t have enough men to take on the Wildlings and figures the Wildlings will figure that out soon enough. What’s a guy to do?

What did you think of this episode of “Game of Thrones”? Hit the comments below.