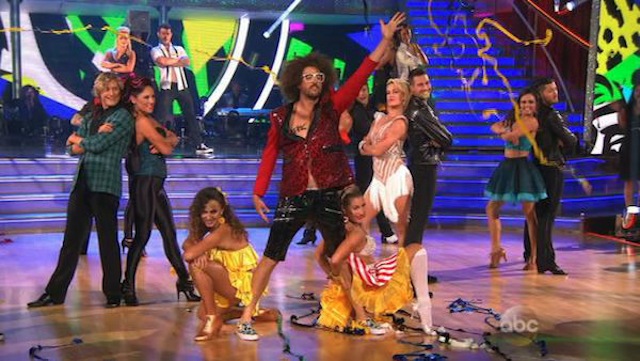 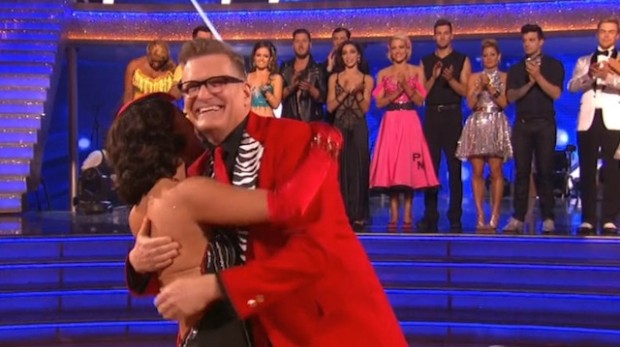 Hey party people in the house! It’s Party Anthem night on “Dancing with the Stars.” Time to watch those feet movin’ and those butts shakin’ to some really great music! And wow, what a fantastic night of dancing it is.

In many ways, these party tunes make it easier for the dancers and choreographers because the music is so great! These are all well-known, really fun songs that easily carry the dance along, and the audience with it. That can also be dangerous because it’s easy for the songs to overshadow the dance, but Drew’s is the only one that really fell victim to that. His tango feels too slow under the funky beat of Rick James’s “Superfreak.”

After another great opening number choreographed by Mandy Moore (who’s apparently the official choreographer for their opening numbers), where the stars did a good bit of actual dancing, Tom introduced guest judge Redfoo from LMFAO. At first I wondered why they chose him as a judge, but he turned out to be very entertaining. Yes, he and Bruno are like two peas in an extremely flamboyant, slightly scary pod, but he has a great way with words. Despite Tom constantly making fun of it, I really appreciate his sand crab comment about James and Peta’s lovely quickstep. I could see exactly what he was talking about; it’s great imagery. I also love that Redfoo’s go-to dance move is the Charleston.

It’s tough choosing a Top 5 tonight because most of the dances are so great. Before I get into it, I want to confess something: I feel a little badly that I’ve yet to put NeNe in my Top 5 dances. It is nothing against her, or her dancing. She’s actually a good mover and dances well; she has natural rhythm, and clearly has a great time. I’ve just liked other dances better. I do wonder if there’s a partner who’s just a little taller, because I sometimes feel that she’s restricting herself because of her size.

Macy’s Stars of Dance: Yes, sorry celebrities, but I have to include the Macy’s Stars of Dance routine in my Top 5—and not just because it’s like a “So You Think You Can Dance” reunion: Season 2’s all-star Allison Holker worked with Derek on the outstanding choreography, last season’s Jenna Johnson is now apparently a member of the DWTS company, and best of all, season four’s Phillip Chbeeb is back, doing what he does best! And truly best: no one else can do what he does, the way he does it. It’s awesome. The routine is insane, but so much fun and really cool. Crazy lights and giant robots? What the what? Totes cray cray.

Danica and Val’s Cha-Cha: Danica looks totally sexy in this fun cha-cha. The blue sparkly bikini is adorable and her abs look great, but more importantly, she dances really well. Her footwork is smooth and low to the ground, not bouncy, which is something Candace needs to work on. Really nice developé too. And I love that totally awesome Doctor Who shirt she wore in rehearsal (I want it)! So cool to know Danica is a Whovian.

Meryl and Maks’s Tango: Maks experiences self-doubt and insecurity during rehearsals, and shows some vulnerability—something it seems like he never would have done in past seasons. He’s still taking the “phoning it in” comment Julianne made two weeks ago very personally, and feels he’s not doing enough to get Meryl the big score. Well tonight, that changes.

Despite his self-doubt, he and Meryl dance a fantastic “film noir of a tango,” as Bruno puts it. It’s so sexy—and not just because of the lingerie pantsuit she’s wearing. The choreography’s fantastic, and her technique flawless. Her movement is so mature, clean and sexy. Just beautiful. They finally get their perfect score.

Charlie and Sharna’s Cha-Cha: Fantastic number, made all the better by a great song: C&C Music Factory’s “Everybody Dance Now.” Charlie’s still so adorable—but not twee, as he unfortunately was last week. This cha-cha is tight, hip, and sexy, though Charlie could bend his knees a little more. Awesome choreography with great musicality, and a nice mix of cha-cha and hip-hop. While the glow-in-the-dark stuff at the end is a little gimmicky, it’s also really fricking cool! They lost their footing just a little bit, but it’s still cool.

Amy and Derek’s Jive: Wow, this woman is just amazing. It’s incredible to watch her; she’s really a great dancer. I’d love to know more about how it works, how she controls her leg movements. I guess it’s all in the hip muscles. It’s very interesting: since the movement is all in her hip flexors (as she mentions), she doesn’t make the mistake many beginners make of bending at the knee when walking backward. She also has great energy and terrific bounce, and it’s a fantastic routine with lots of good content. She loses her balance at one point, but Derek helps her out, and she does a stellar job. Of course the song, “Shout,” is an instant party, which certainly helps. Not that they need it.

The Battle of the 90s Sitcom Stars goes a step further as both Candace and Danica are in jeopardy. But alas, it’s Drew, the ultimate entertainer, who is sent home—as he suspected he would be. It’s sad, but perhaps it’s for the best. At this halfway point in the competition, there are so many others who are stronger dancers.

So what did you think, dance fans? Was the party everything you’d hoped? What were your favorite routines? How about that weird mirror-square-headed dude? Are you excited for Latin night next week, with Ricky Martin? Chime in below.