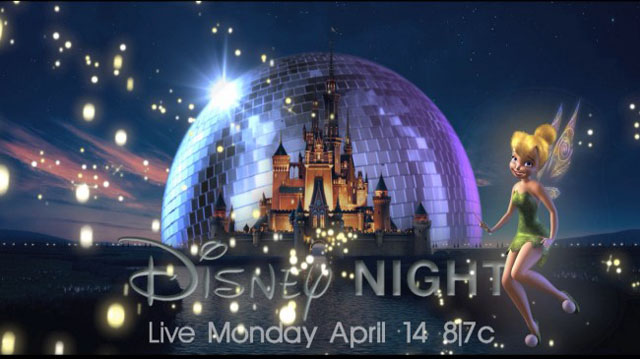 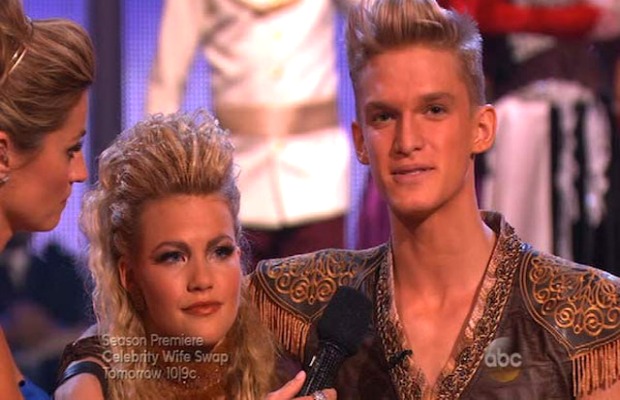 Can you believe it, dance fans? It’s week 5 of “Dancing With the Stars,” and we’re already halfway through the competition. How on earth did that happen? It’s flying by. With the super heavy, totally shameless self-promotion we saw this week, I’m not too sad that it’ll be over soon.

It’s Disney week, and DWTS has their graphics people working overtime—all while giving their permissions folks a big vacation. I’m sorry to say this, but what is the purpose of Disney week, other than self-product placement and trying to get more viewers for little money? (Since Disney owns ABC, I’m sure they didn’t have to pay anything for rights.)

Now, don’t get me wrong, I love Disney as much as the next girl, but tonight’s Disneyfication of the ballroom and everyone in it mostly makes me want to toss my dinner. Maybe I just had some bad sushi or something, but nothing appealed to me much. (I did see a really terrible movie–to remain nameless for now–before watching the episode, so perhaps that colored my opinion.)

Guest judge Donny Osmond brings some fun back to the judging panel—and gives Bruno something else to do—while also providing strict feedback. In fact, he’s a bit harsh, particularly on poor Cody Simpson, saying that the teen sensation didn’t show enough joy on his face in his otherwise pretty decent samba. (For a treat, check out Osmond in Weird Al Yankovic’s White & Nerdy video. He completely steals the scene from Al. No small feat.)

Cody is ultimately, and rather surprisingly, eliminated this week. I thought for sure Candace was out, and you can tell so did she. She smiles and nods as if she knows her name will be called. Then her jaw hits the floor as they call Cody’s name. I guess the volume of the girls’ shrieks in the ballroom misrepresents the number of fans actually there, or it just doesn’t translate into votes. As for Witney’s complaint that we didn’t get to see Cody, I beg to differ. That’s all we’ve seen! She allowed him to incorporate so much of his style into every dance that he was barely challenged. I’m surprised she could say that with a straight face.

There’s always a good bit of awkwardness on DWTS too (ah, live television), but tonight is particularly uncomfortable. People talk over each other or just can’t quite get the timing right. Having lots of animation and effects probably takes its toll too. But when I ignore all the extra fodder and just concentrate on the dancing, I’m still able to come up with my Top 5 dances for the week:

Charlie and Sharna’s Jazz: I’ve been very clear how much I adore Charlie—even if he does drop his cane in this “Mary Poppins” routine. There’s a tad too much cane work in this ambitious jazz anyway, but he recovers pretty quickly, and has great flare for the movements. There is something missing, but I can’t quite put my finger on it yet. For now, I’m still enjoying his endless adorableness.

Danica and Val’s Quickstep: Wow, it only just occurred to me that the song “Beauty and the Beast” is not a waltz. How did I miss that? We assume they’re waltzing in the movie during that song, but musically, it’s not a waltz (not that that’s stopped DWTS before). Funny how misleading some music can be (and don’t get me started on the perennial wedding favorite, What a Wonderful World).

Anyway, Danica and Val use “Be Our Guest” for their “Beauty”-themed quickstep, and have to contend with more animation. I also think her skirt is the tiniest bit too long, as it seems to get in her way, but she’s dancing very well in spite of it. When I ignore all the extra bits with props and dancing flatware, the dance is great. Len is right: Danica’s a terrific dancer.

James and Peta’s Contemporary: Is “Frozen” the real reason behind tonight’s extravagant and self-indulgent Disney night, especially now that it’s available on DVD? Boy, do they overdo the animation on this routine, as impressive as it may be. Maybe take your own advice and “Let It Go.” Ha, ha. As if.

But this contemporary is nicely done and pretty ambitious—especially that lift at the end. It’s rough, but they pull it off. James, besides very cute, is lovely to watch: strong, athletic, with long lines, and total commitment. He’s a great dancer. And he got the first perfect score of the season. Good on ya, James.

Meryl and Maks’s Samba: Meryl’s always great, and this “Jungle Book”-inspired samba is no exception. The animation is a bit much again, but the dancing’s great, especially their beautifully smooth samba rolls. My only confusion is that “I Wanna Be Like You” is a bona fide swing song, even sung by the King of Swing himself, Louis Prima. So why dance a samba to it? I suppose because Meryl and Maks have done Lindy hop before (though not jive), but it seems like an odd choice.

Candace and Mark’s Samba: Yes, there are several sambas tonight, and not all of them really match the music, but “Under the Sea” actually is a samba. Candace comes out of her shell a bit (heh heh) for this “Little Mermaid” routine—although that’s still the largest and least revealing bikini I’ve ever seen, especially on “DWTS.” She’s still very careful in her dancing, but she’s cute and she’s shaking it. Carrie Ann is absolutely right: Candace becomes a different dancer when she’s nervous, and she needs to keep the nerves at bay. Still, I’m glad she’s sticking around another week.

So what do you think, dance fans? Were you also nauseated by the over-the-top twee and self-indulgence this week, or was it just me? Were you surprised at Cody’s ouster, or could you see it coming? Excited for Party Anthems next week? Discuss below.