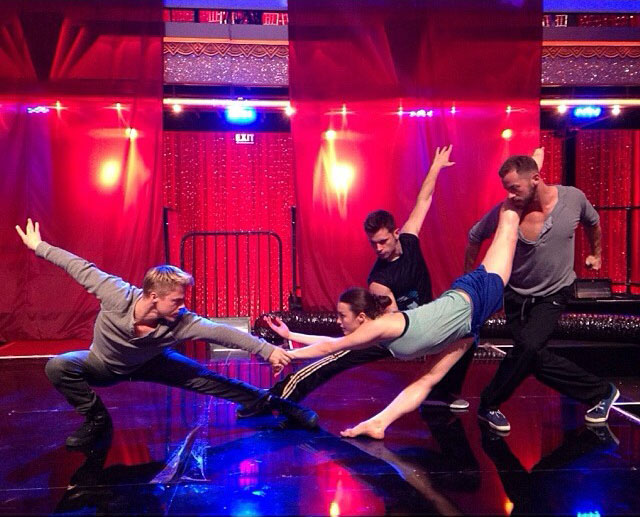 Well, dance fans, the week we’ve been waiting for has arrived! The big Switch-Up was tonight on “Dancing with the Stars.” Was it everything you hoped? I didn’t see any of the pairings I asked for, but hopefully you did.

All of the couples are safe tonight too, and I confess I’m a little disappointed. I guess they felt it would be unfair to boot anyone off when people aren’t dancing with their regular partners. Understandable. This is probably why they had that double elimination the first week.

We saw the return of lovely but strict guest judge Julianne Hough, who was equally as tough this week (though I really did not like her dress, with its random peekaboo and the funky broach). We also saw the fortunate return of the Macy’s Stars of Dance performance, under the direction of Julianne’s brother Derek. Tonight’s performance was very exciting, and not just because of all the sexy shirtless men. In fact, it made my Top 5 performances tonight:

Drew and Witney’s Cha-Cha: Witney switched from dancing with the youngest competitor on the show (Cody) to the oldest, Drew, and she looked good with him. They’re not quite on the music at the beginning, and it’s a tad awkward, but somehow it works. He’s certainly having lots of fun, and executed a great knee slide. They look straight out of “Saturday Night Fever,” with the floor flickering and the glittery white suit.

Macy’s Stars of Dance: How about that Paso/Flamenco with a twist! I love that Derek thinks about the role television plays, or can play, in the dance, like Twyla Tharp did back in 1980. It’s pretty dang cool. It’s also fun to see Kathryn McCormick from “So You Think You Can Dance” again. She’s always been amazingly flexible. She kicked herself in the head! The music is thrilling too, to the point where it may have slightly overpowered the dance.

Danica and Maks’s Jive: I don’t understand why a majority of people wanted to swap one Chmerkovskiy brother with the other. Danica usually dances with Val and tonight she’s with Maks, while Meryl is usually with Maks and tonight is with Val. It almost makes me think people didn’t want the switch.

I also don’t understand what happened with the music mistake. I definitely noticed that they were off the music—in fact, I was starting to wonder if the dubbing’s off on my TV because everyone’s just a little bit off, but shouldn’t they dance to what they’re hearing? Were we not hearing the same thing they heard? It didn’t make sense. They did dance well though, otherwise, and it’s a very cute routine. Her losing her skirt was unnecessary, and I agree with Len that there could have been more content, but she looks great.

Cody and Sharna’s Fox Trot: Thank you, Sharna, for finally telling Cody to stop wearing those dopey pants! I’m so glad to hear that. I hoped Cheryl would be paired up with Cody so she could kick his butt, but Sharna did a pretty good job of it too. I enjoy his fox trot (love that song, too), even though he needs to drop his shoulders and be careful not to jut his chin out (or his tongue, for that matter). I also totally agree with Julianne that I’d like to see him do something totally “un-Cody.” But the routine is very sweet and they dance it well.

Meryl and Val’s Argentine Tango: Definitely the best dance of the night. Yes, I love me a good Argentine tango, but this is awesome. The song is so not tango music (why do I keep bothering to think about that?), but it works well and is totally exciting. She’s such a ringer, but she’s great.

So what do you think, dance fans? Did you like the new pairings, or were there couplings you hoped to see that you didn’t? Is it just me, or did Charlie White totally look like Josh Hutcherson with his hair slicked back like that? Are you happy to see things return to normal next week? Chime in below.