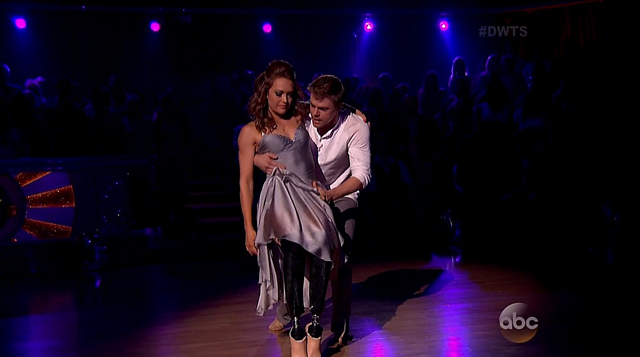 Hey dance fans, welcome to week 3 of “Dancing With The Stars,” and an evening full of emotional and moving moments, as well as some equally awkward ones.

Starting with Robin Roberts’s entrance. The “Good Morning America” host served as guest judge this week, and has some interesting things to say, but from the too-close camera work to being bonked in the head with Val’s arm, her entrance is just uncomfortable.

But there are definitely some very touching moments tonight as well, as the stars commemorate their most memorable year. Lots of them give thanks to their families and loved ones, parents and children. Amy Purdy’s story, of course, is particularly moving, and her dance definitely, easily, made it into my Top 5 dances.

James and Peta’s Jive: Apparently the gorgeous James was chubby as a kid, and was picked on, but his bullying motivated him to move forward. Well, look at him now. So cute, a big star (relatively speaking, at least), and a great dancer. This jive is terrific, Peta’s clearly having lots of fun, and they kept the flirty sexy stuff to a minimum; I appreciate that he didn’t actually kiss her for a change. He needs to watch his shoulders on the high kicks and not lean forward, but his footwork and movement style are great. Really nicely done. Definitely his best dance.

Cody and Witney’s Jazz: Cody commemorates the year he moved to Los Angeles from Australia. It’s fun to hear his own song, and I imagine pretty cool for him. I enjoy the dance a lot, particularly how it includes some jive in addition to his own style of jazz. But as much as I like the song, I agree with Len, both with his words and his score: he says it’s like a boy band routine, and I suspect he awarded only an 8 because it isn’t enough of a challenge for Cody. I wonder how much of the routine Cody choreographed and how much Witney choreographed. I assume they chose the song and dance themselves. I would love to see him paired up with Cheryl next week, because she would probably kick his butt, and perhaps give him a challenge, like a fox trot or contemporary. That would be something to see.

Danica and Val’s Contemporary: Is Val’s hair just getting long or did he perm it or something? Not that it’s important to Danica’s dance, dedicated to the year her son Draco was born. (Draco? Really? After Malfoy, by any chance?) This was also the year her grandmother died, so Danica danced about a child’s fear that their parent will someday die and leave them alone. The theme aside, the dance is lovely and not angst-ridden or heavy handed. Despite a couple of awkward moments, Danica danced really beautifully, and looked very strong, especially in that reverse backbend lift.

Amy and Derek’s Contemporary: This dance is astounding. Amy remembered 1999, the year her father saved her life by donating one of his kidneys. She also lost her legs to bacterial meningitis and got her prosthetic legs that year, and her father taught her how to move on and make life count. They danced together (to a Texas two-step) and it made her see that she could do anything. Hers is a remarkable story.

As is common with contemporary, Amy performs barefoot, with special new feet that allow her to point her toes. It’s slightly odd that she is then on her toes the whole time, but it’s still amazing to see. I really did appreciate, as Carrie Ann said, how much we can see her physicality because she bares so much in the dance, literally and figuratively.

She’s gorgeous, the music and choreography so moving, and the story so emotional. I rarely cry watching television (except for last Sunday night), but this brought tears to my eyes. The assisted running at the end is heartrending. I also really appreciate Derek’s comments too: when Amy asked how she could ever thank her parents properly, he said, “You’ve been thanking them every day by living your life and using what they gave you.” Amazing.

Charlie and Sharna’s Jive: Yes, I have a soft spot for Charlie, because he’s adorable, and a wonderful dancer, and this routine is no exception. While it’s a great routine, really fun and exciting, it seems a little odd for a competition dance to have him running all over the studio with backup dancers and such. Seems like there are rules against that. Yet there’s still a good bit of content in the routine, and Charlie has such great energy and wonderful movement quality. I love watching him; he makes it look so easy. Plus, he’s absolutely adorable.

The elimination decision this week is made for us because Billy Dee needs to back out due to injury. I can’t say I’m heartbroken about it, or terribly surprised, but I’m sad for Emma. I do hope she can come back, at least next week if not after that, because she’s wonderful. I voted for her and Charlie to be paired up with next week’s big switcheroo.

So dance fans, who do you want to see paired up next week, and why? What were your favorite dances or stories tonight? Are you looking forward to the first Macy’s Stars of Dance routine next week? Leave thoughts below.