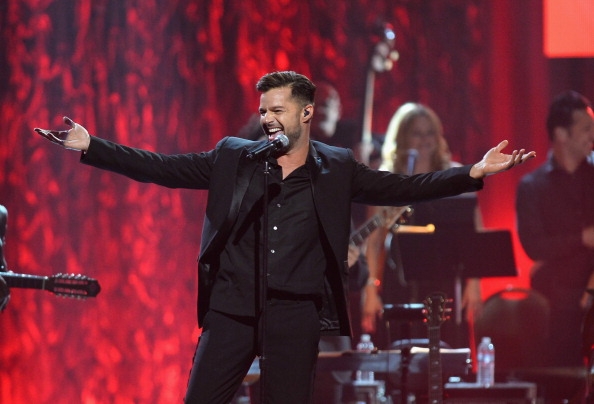 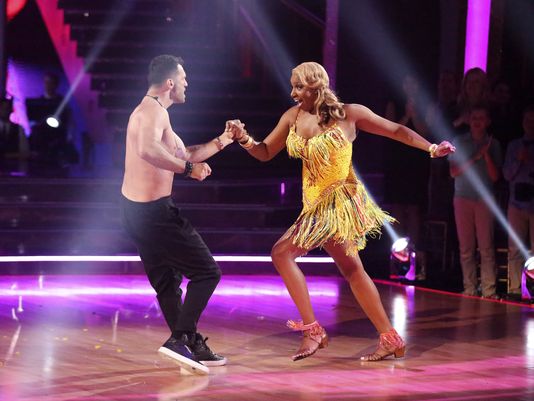 Hey dance fans! Welcome back to the ballroom for Latin night on “Dancing with the Stars.” More like Injury night, unfortunately, with at least half our stars suffering injuries—even to the point of missing a performance. If it wasn’t already clear just how hard they’re working and how difficult this is, it should be clear now.

During the week, Danica fractured her rib, and there was much speculation about whether or not she’d dance. Fortunately she did, and did pretty well, considering (more on that below). Just after her dance tonight, Amy injured her back, or perhaps reignited a previous problem, and had to bow out before the team performance. Charlie’s knee went a little wonky during his performance tonight, and Meryl and Maks each experienced some specific pains during their rehearsal week, hers in her wrist and his … somewhere he didn’t want to specify (maybe the psoas, she suggests diplomatically).

Ricky Martin sits in as guest judge for Latin night, and sings the opening number. I think he sounds odd, but I’m not that familiar with his voice. Of course, he also lends his music for the team dances, but alas, he doesn’t offer much as a judge. He has some technical knowledge of the tango, perhaps from his stint in “Evita” on Broadway, but the rest of the time he’s mostly a cheerleader.

Before we get into my Top 4 performances this week (yes, I’m afraid I’m only including four this week), I would honestly like to know your thoughts on James and Peta’s samba. More than once, I’ve expressed my feelings here about Peta, and tonight is definitely no exception. In fact, it’s particularly over the top tonight. I really don’t like their dance at all. It’s all (manufactured) sex and no substance (I sound like Len), and just pushing the “are they or aren’t they” malarkey way, way over the top. There might have been some good dancing hiding in there, but it’s covered up in soft-core stripping and unnecessary props (or stripping with props). It honestly makes me a little nauseated. I also can’t help but wonder what Candace thinks of it. What did you all think? Am I the only one who hated it?

And let’s not even mention that ridiculousness about tweeting whether or not Tony should dance without his shirt. (Fess up now: did you vote?)

Now, without further ado, my Top 4:

Danica and Val’s Salsa: Especially considering Danica is dancing with a broken rib, she did a pretty great job! (It was funny how quickly the x-ray of her rib went from “what am I looking at” to “aiyaiyai” when they pinpointed the fracture on our screens.) Obviously, they took out the lift that caused the problem, and probably a few others, but just doing all that hip motion and booty shaking can really hurt. I agree with Len that there could be more salsa content—the number is more a blend of Latin and hip-hop than salsa (like Meryl’s number later), but she is still adorable and did an admirable job.

NeNe and Tony’s Argentine Tango: I’m finally putting NeNe in my Top 5. Yes, I’m a sucker for Argentine tango, but she also handled it very well. The judges complimented her on playing a character, but I feel that the character is there before and after the dance more than during the dance. She needs to watch her arms and hands, and she’s still pretty guarded and needs to make her movements much bigger. I suspect this dance is a challenge for her because she doesn’t get to shake it. She actually looks great in the Team Vida dance. Dancing with the other dancers brings her up and forces her to match them.

Charlie and Sharna’s Paso Doble: I first have to explain that because of what comedy-music duo Paul and Storm lovingly call “The Best 36 Seconds on the Internet,” I can’t hear that song and not laugh. So tonight, I had to stop and rewind Charlie and Sharna’s paso half way through it when I realized I just wasn’t paying attention.

Once I did pay attention, I was really pleased. Unlike Len, who simply said, “this was not special” with no further explanation or comment, I think this routine is great. They especially start out strong, with interesting choreography and good flare, but then they get slightly off timing and then start making mistakes and can’t quite get it back. I guess Charlie’s knee went a little wonky in one of the jumps, and it threw him off. I still don’t fully understand why, since he’s an Olympian, but there’s also something else about him that’s not quite coming across. I just can’t put my finger on what it is yet.

Candace and Mark’s Argentine Tango: Candace may be suffering serious insecurity issues, but they dissipated some for this routine. And rightly so: she danced it really well. Very nicely done! She still holds back, but her legs are fantastic. Certainly best legs of the night (suck on that, Peta). I find the choreography a little too mechanical because it’s so closely matched to the music, which is very staccato, but it’s still a good routine that she executes well. Nice pinstripe suit, too, Mark.

By the way, how impressive were Candace’s warm-up push-ups?

While it’s always interesting to see the team dances, I’m personally not overly impressed by either of them. I think they both look a little rough. I keep wondering if the judges and I saw the same dance for Team Loca, because I think it looks pretty messy. Both team dances are fun and entertaining, but I didn’t like them as much as some of the couple dances. And considering how often the couples are dancing with other people, there’s not as much difference somehow.

Perhaps not too surprising, especially once Candace was declared safe, NeNe is going home. She’s been doing great, so it’s not a reflection on her, it’s just late enough in the season that someone has to go. As Tom says, we’re officially in the home stretch, and there are only three episodes left. I think it’s a pretty safe, if not obvious, bet that Meryl will be in the finale (if not the winner), and will probably be joined by Danica and Charlie. But you never know, sexy James could sneak in there, or Amy could steal it all away with her wow factor.

So what do you think, dance fans? What are your predictions for the finals? Do you think the various injuries will heal by next week? What do you think about “Dance Mom’s” Abby Lee Miller guest judging next week—not to mention the twist of the stars dancing with each other? And tell me please: am I the only one who hated James and Peta’s samba? Share your thoughts in the comments.