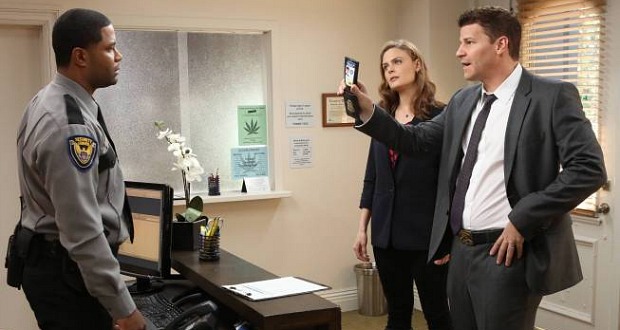 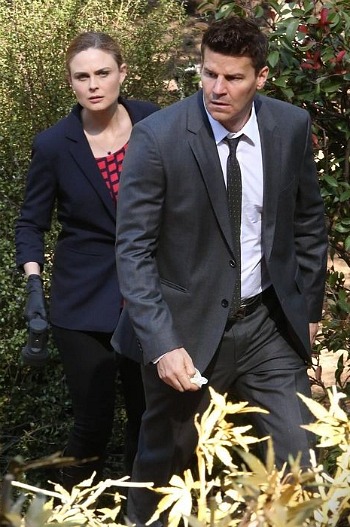 This episode of “Bones” dealt with the team trying to solve the murder of a marijuana dispensary employee, Abby Briggs, who was found in a log in a Virginia forest. Meanwhile, Wendall returned and explained his challenges with his bone cancer treatment, and Booth prepared for his annual competency test.

The episode began with Booth and Brennan at target practice. They bantered about Booth’s preparation for his test. Bones told him he should practice for the mental test, but he assured her he would pass in the 90th percentile like always. She, of course, thought he should shoot for a higher percentile, but he said he was fine. He goes with his gut, and she accused him of being set in his ways. Why wouldn’t he want to do better?

Later at the lab, they started their analysis, which was hard because of the major amount of bugs on the body. Wendall showed up back to work and was sporting a bald head due to his chemo. Poor Wendall. After identifying the victim, the team found out she was an art school drop-out due to her extreme pain from Lupus. One of my closest friends’ mother has lupus, and believe me, it has greatly affected her life. Sad.

It ended up that Abby worked at the marijuana dispensary to ensure that only medical patients get the cannabis, not school kids who wanted to get high. A surveillance video showed Abby kicking out a kid who she knew only wanted it for getting high.

The talk of medical cannabis was a center point in this episode (awareness about social, environmental, and political topics are very much a big part of “Bones,” which I really admire). In a private moment, Wendall told Hodgins that he did smoke medical marijuana to help with the terrible side effects of chemo. Hodgins understood; he said he would do the same thing. Wendall did make it clear that he only smoked it for medical purposes.

It was sweet how he was concerned what people would think – and his concern was valid, because Cam had to fire him. The Jeffersonian is a FEDERAL institution, and marijuana is still illegal under federal law. Cam felt horrible, but she really had no choice, right? Booth understood Cam’s stance, but the rest of the team, including Brennan, were mad about him being let go. That was a tough one.

On a side note, Booth was very conservative about the pot. I thought he might have been a little more flexible and talk to Cam, but I should know by now, he’s very patriotic and an FBI agent! At least we saw him be understanding and caring of Wendall’s situation.

Back to Abby. Suspects were interviewed, including the doctor who started the dispensary, the student whom she turned away, and the security guard who had a crush on her. I always try and guess who did it, but I wasn’t sure on this episode.

Booth wanted to do something to help Wendall, so he went to Carolyn and they were able to come up with a way for the Jeffersonian to hire Wendall back – but as a consultant. He even was given his own office! Yay. Wendall is such a sweet guy, and Booth really likes him, which is nice to see. Booth liking a squint. Laughs!

The team found out that Abby was growing her own marijuana – a kind that helped medically, but didn’t get people high. Who wants that kind, right? Kidding. I’m not sure there is such a kind, but if it was brought up on this show, I bet there is.

Anyway, it turned out that the kid stole her pot and hit her on the head with a writing award trophy that he had won. The bad news was that Abby’s pot didn’t get he or his friends high. Abby died in vain, unfortunately, but the episode brought awareness to the benefits of medical marijuana. People need to understand that there are many who use it ONLY for medical purposes and not to get high. Our society tends to judge people when they have not experienced things themselves. I think it’s important to put ourselves in others’ shoes before we judge.

And yes, of course Booth passed both of his tests with flying colors. This time he passed with a 97 percent! Bones was very happy for him, and they celebrated with champagne. Nice.

I am looking forward to the finale, which will be here soon. I believe something bad is going to happen – that’s what I’ve heard. Gulp.

Do you like the social issues that “Bones” sometimes focuses on? Are you excited for the season finale? Please leave comments below!