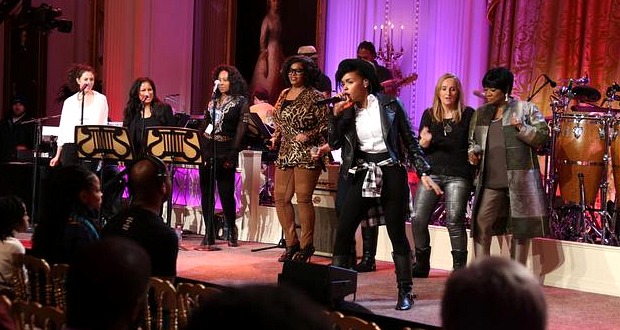 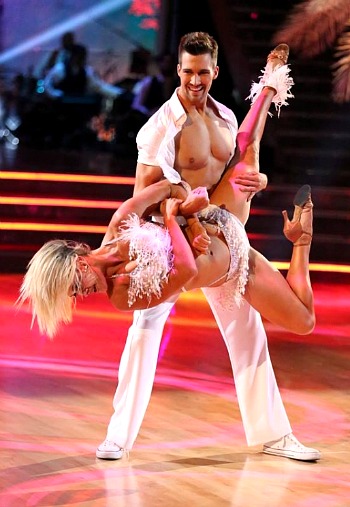 What’s on TV tonight? Bones, Bitten, Lost Girl, The Voice, Dancing With the Stars, The Following, and a celebration of female musicians on PBS’ In Performance at the White House: Women of Soul. Here’s the rundown.

Antiques Roadshow | PBS
Kansas City
Part 2 of 3 in Kansas City, Mo. Items include a beauty book, circa 1928, by Madam C.J. Walker, who was the first American female millionaire; an 1861 E.G. Wright silver cornet; and a 1920 Julian Onderdonk oil painting that the artist gave to the owner’s mother. Also: the Toy and Miniature Museum is visited.

Basketball Wives LA | VH1
Jackie and Chantel try to put issues involving Draya behind them. Elsewhere, Jackie invites the ladies to a getaway to France.

Bitten | Syfy
Ready
In the Season 1 finale, Elena returns to Stonehaven and her Pack after learning the truth about Clay’s role in her werewolf origins. Reunited, they ready themselves for an epic war against the Mutt army led by Santos and the mysterious James Williams.

Bones | FOX – EDITORS’ PICK
The High in the Low
Remains found in a log in a forest belong to an art-school dropout who had lupus, and the investigation reveals marijuana use to ease her pain, but her work at a dispensary may have had something to do with her death. Meanwhile, Wendell Bray reveals information about his illness; and Booth gets ready for his FBI competency test.

Chopped | FOOD
Burn for the Worse
Two starchy ingredients—Chinese dumplings and Middle Eastern noodles—are used in the appetizer round. Later, one chef burns two of the mystery ingredients when making a lamb entrée; and pawpaw desserts are made before the winner is named.

Dancing With the Stars | ABC
Another elimination occurs after the fourth week of performances, during which the stars’ dance pairings are switched. Also: a “Macy’s Stars of Dance” performance featuring Kathryn McCormick (“So You Think You Can Dance”). Julianne Hough serves as a guest judge.

Kickin’ It | DISXD
RV There Yet?
Jack and Milton take a road trip to bond and stop bickering. Meanwhile, Jerry and Joan buy a storage locker where they discover a famous piece of sports memorabilia that appears to bring them good luck.

Star-Crossed | CW
An Old Accustom’d Feast
Roman invites Emery to an Atrian holiday inside the sector; and Emery asks Sophia for advice on impressing her mother. Meanwhile, Vega tells Drake that he’s been picked to be the new undercover operative and that he must leave town and have his markings removed, but Roman asks her to reconsider sending Drake away; Julia refuses an offer from Eva, forcing Eva to take her mission elsewhere; and Grayson talks with Emery about her feelings for Roman.

The Voice | NBC
The Battles, Round 2 Continues
The battle round continues. Coldplay singer Chris Martin serves as an adviser.

Championship Central | CBS
Previewing the Kentucky-UConn NCAA basketball final, plus a recap of the tournament.

Mighty Med | DISXD
Growing Pains
Oliver accidentally steps into the line of fire of a superhero’s beam during a routine test, which reverts him back to being 4 years old.

Being Human | Syfy
There Goes the Neighborhood Part III
In the series finale, Sally makes a huge sacrifice to keep her vision of Aidan killing Josh from coming true and that, in turn, changes Aidan’s life forever as he fights to destroy the house’s evil spirit. Meanwhile, Josh and Nora imagine their future roles as parents.

Dallas | TNT
Like a Bad Penny
John Ross seeks help from J.R.’s business partner in order to control Ewing Global. Meanwhile, Emma learns more about the controlling nature of her father and grandmother, and Elena focuses on an unveiled secret as her brother returns to Dallas.

Kitchen Casino | FOOD
High Steaks
Meatballs, flanks steaks and salami are among the ingredients vying chefs have to work with in the premiere of this culinary competition with a casino twist, which features cooking challenges based on the games of slots, roulette and poker.

Love It or List It | HGTV
Dysfunctional Home
A couple consider selling the place they have called home for 30 years, because it just isn’t big enough for their multigenerational family, although Hilary’s plan for an open-concept space could convince them otherwise.

T.I. and Tiny: The Family Hustle | VH1
T.I. makes sure his children have training for emergency situations after his sister has an asthma attack. Elsewhere, Tameka and Shekinah attend a retreat, where their friendship is tested.

The Following | FOX
Betrayal
Joe targets an enemy’s son after being publicly condemned. Elsewhere, Ryan hears news about Claire’s reappearance; and Mandy makes a decision that could undo all of Joe’s work.

The Real Housewives of Beverly Hills | BRAVO
Secrets Revealed
Previously unseen footage from Season 4 is featured. Included: Kim gives Brandi acting lessons; Lisa and Joyce connect over dinner; Kim receives tips about plumping her lips; and Kyle gets a tutorial on how to be a TV presenter.

The Real World: Ex-plosion | MTV
Reunion
An update on the cast members.

Black Ink Crew | VH1
We All Got Problems
Disturbing information about O’S**t’s case comes to the fore. Elsewhere, Ceaser’s sister visits the shop, resulting in rising tensions; and Dutchess tries to patch up differences with Puma.

Bates Motel | A&E
Plunge
Dylan takes control of a volatile situation; Norma and Norman’s relationship is threatened; and Emma finds herself in a dangerous situation.

House of Food | MTV
Greasy Spoon
The students learn how to survive in a fast-paced diner environment.

Independent Lens | PBS
Brothers Hypnotic
This documentary about the Hypnotic Brass Ensemble, a Chicago-based group of eight brothers, charts the siblings’ rise from playing on the streets of Manhattan to jamming with the likes of Mos Def and Prince. The sons of avant-garde jazz trumpeter Phil Cohran, they’ve been taught from a young age to eschew pop stardom and, instead, “create sounds to fuse with the body and heal the soul.”

Lords of the Car Hoards | DSC
Dude, Where’s My Merc?
A 1950 Ford Mercury is restored.

Lost Girl | Syfy
Dark Horse
Bo struggles with the toughest decision of her life and resorts to desperate measures to prevent evil from overtaking the world in the Season 4 finale.

Mystery Diners | FOOD
Mexicali Blues
In the Season 6 premiere, the owners of a Mexican restaurant in Los Angeles are concerned that their customers are being served items that aren’t on the menu.

Southern Charm | BRAVO
The Glass Menagerie Is Half Full
Thomas hosts a dinner in a bid to teach his friends not to make the same mistakes he’s made.

American Dream Builders | starts at: 10:01 | NBC
Cabins in the Woods
Two rustic cabins in the mountains of Big Bear, Cal., receive makeovers. Included: Team Blue get creative, taking elements found in nature and repurposing them. Meanwhile, Team Red put their focus on color and making the space pop. Also: Everyone is faced with solving a rodent problem.

This Is Hot 97 | VH1
Angie gets roped into playing a video game. Meanwhile, a mysterious someone has been stealing Miss Info’s lunch, and Rosenberg is convinced he could have a lusty encounter.