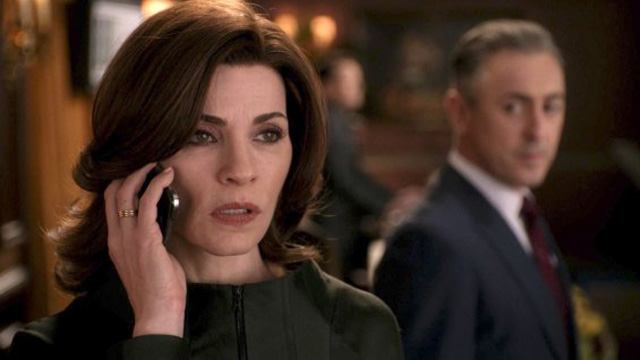 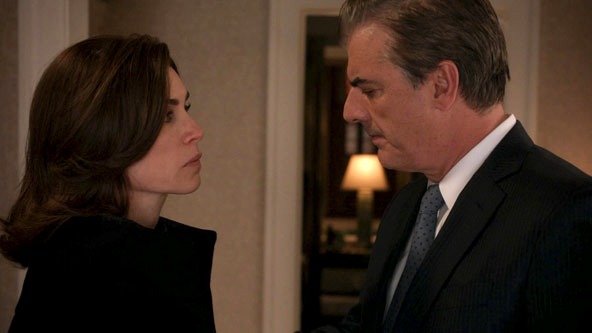 Hey Good-wifers, still reeling from last week’s “The Good Wife” shocker? I am, so much so that I went into this week’s episode with dread. I’m still not ready to rehash everything that happened, and I’m frankly still angry with the creators for taking the show in this miserable direction.

Like the remaining characters affected by Will’s death, I too am making my way through the various stages of grief. This episode, “The Last Call,” studies this a bit, looking at the different approaches people take to deal with tragedy. It reminds me of the classic “Buffy the Vampire Slayer” episode “The Body,” not just in the characters’ different responses to death, but in some of the visuals, like the blue filter of the jail, and in its use of silence. It also happens to be episode 16 of Season 5. Spooky!

We start with the end of last week’s episode: Kalinda finally reaches Eli by phone to tell him and Alicia the awful news. Eli pulls Alicia out of the Chicago Correspondents’ luncheon to deal with her shock, and we’re treated to a little comic relief as Eli reads the teleprompted speech meant for Alicia. Gee, thanks. It’s pretty funny, but I’d think Eli would be a little better on his feet.

As Alicia drives to Lockhart-Gardner, she envisions what may have happened, without knowing any details. She pictures a big burly guy with tattoos holding a gun sideways, not yet knowing that it was Will’s meek client Jeffery, in a fit of insanity, according to his new lawyer. Alicia also realizes that Jeffery was supposed to be her client, and that she could have easily been in Will’s place. The sight of a young mother protecting her son as they cross the street makes Alicia break down in tears.

Diane enters LG to discover that the partners are already gathered and waiting for her because they were going to vote on the Los Angeles expansion. Diane privately pulls herself together, and then informs the partners of Will’s death. Perhaps the most surprising reaction comes from typically-snarky David Lee, who leaves the room and commandeers another conference room so he can have a private place to react.

What’s so sad is that none of them really give themselves any time to grieve. Yes, when Alicia arrives at LG, she and Diane share a moving, tearful hug, but it is so important to keep up appearances and move forward professionally and business-like that they barely allow themselves to feel anything. In fact, when Diane hears an intern blubbering away loudly in the hall, she tells her to pack up her things and leave. I thought Diane of all people would have a little more compassion—though I also don’t know why Will’s death affects this intern quite so much.

Diane also shows some backbone in dealing with one of Will’s clients, Bob Klepper, who insists that they see him immediately. No wonder they don’t feel they have time to grieve; with clients like these, how could they? Diane tries to imagine what Will would do in her position, and instead fires Klepper as a client, and blacklists him with other firms.

Alicia looks at her phone messages and discovers a cryptic message from Will from 11:32 that morning. In the message, he is interrupted by the judge and tells Alicia he’ll call her back. Alicia spends the episode trying to figure out what happened, and what he may have been calling her about. We see Will in her imagination, in different types of calls: calling to put all their arguing behind them, or calling in anger because she poached another of his clients. Of course we’ll never really know, but Alicia later meets with prosecuting attorney Finn Polmar (Matthew Goode, now a series regular), looped up on pain killers in the hospital, who confirms that if Will was angry, it was not about her but about Damian. Oh yeah, I’d totally forgotten about him. None of these little things matter anymore.

I find it particularly interesting that David says he’s sorry to Alicia. Yes, it’s something you say when someone close to you dies, but it makes me wonder what David knows about her relationship with Will. Perhaps he’s just referring to their very long friendship from Georgetown, but maybe he knows more than he’s letting on.

We learn a little more about just what happened during the shooting—not that it makes any more sense for Jeffery’s character. Apparently Jeffery grabbed the gun and shot the witness, killing him, and then the other guards and SWAT members started shooting back. We also learn that the first bullet to hit Will was from Jeffery, not from the crossfire, which means that Jeffery definitely killed Will, whether or not he meant to.

First of all, were there that many people (additional guards and SWAT members) in the courtroom already? Secondly, I think the witness was the professor originally suspected of killing Danni Littlejohn. If so, why would Jeffery want to shoot him? His guilt is Jeffery’s only chance for freedom. Jeffery killing the professor only proves Jeffery’s guilt, regardless of what his new lawyer may say. And how was the judge not even wounded? I thought he’d be the first one shot, since the judge holds Jeffery’s life in his hands.

I really appreciate, and agree with, Jeff Jensen’s opinion in Entertainment Weekly: I’m still more angry than sad about this turn of events. It may prove dramatic for the remaining characters in the weeks to come, but I would still rather have Will alive, and this violent death seems more like an easy way out (yes, I’m a Willicia Shipper, as I’ve admitted freely). Of the characters in this episode, I relate more to Cary, the little we saw him, who jumped straight to the anger phase, taking out his aggression about the loss on his new client’s opponent.

I do also feel what Alicia feels, in those little moments where she thinks she sees Will everywhere. She imagines him telling her it was a mistake and he’s not actually dead. Would that it were true.

Also angry, Kalinda tortures Jeffery in jail by presenting him with a way out: she offers him his belt so that he can hang himself, but then pulls it away, telling him he has to live with his guilt. I don’t fully understand her reason for this, and it doesn’t shed any more light on what Jeffery’s motives were in the shooting. Granted, he probably didn’t know what he was doing, but he clearly feels terrible about it now and is already torturing himself. As Jordana Spiro’s Jenna points out, it doesn’t help anyone.

Alicia has a brief conversation with Grace, who believes that Will is now in a better place. They discuss the existence of God and how there could possibly be any good in a tragedy like this. While it’s interesting to see this point of view, we haven’t seen either of Alicia’s kids in weeks, so it feels slightly contrived to me.

When Alicia returns home, Peter is waiting for her and gives her a hug. She doesn’t appear to hug him back, and is instead picturing Will: he says he loves her and wants them to go back to the way they were. A little something for us shippers. Gee, thanks. But is it real? Could this be what was on Will’s deleted message from the end of season one? Or is Alicia just imagining it?