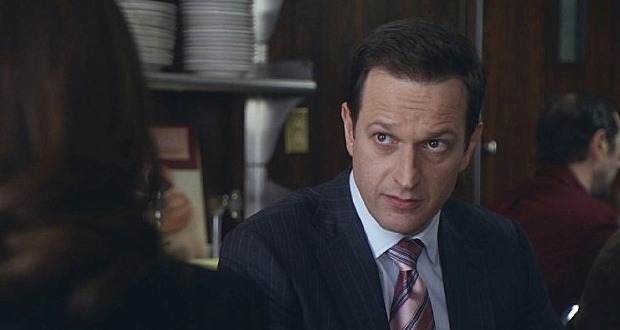 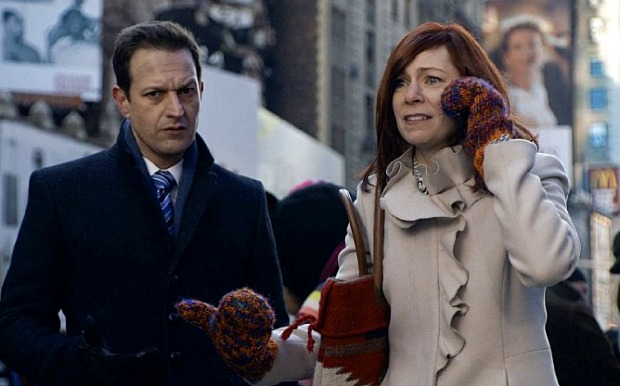 Welcome back Good-Wifers! We’re finally back after the long hiatus (including some personal time) with new episodes of “The Good Wife.” It’s about time. Don’t know about you, but I’ve missed seeing these characters every week.

And while there are things to discuss about last week’s episode (Marilyn doesn’t seem to trust Peter and may have gotten him in more trouble! Cary and Kalinda are sleeping together! Again!? I was wondering when that NSA surveillance/wire-tapping storyline was going to reappear! Jack Davenport plays an American!), I’m going to jump right into this week’s episode.

We first see Alicia pacing nervously in her New York hotel room as Cary reads over her speech. (Like recent “The Mindy Project” episodes that pretend to visit the city where it’s actually filmed, “The Good Wife” is now “visiting” New York.) As Cary reminds Alicia, and us, she’s being honored as keynote speaker at the American Bar Association conference because she went from an opt-out mom to a partner in a law firm in just four years. (That’s ’cause she’s on a television show.)

The speech allows Alicia a chance to reflect on her days searching for her first return job in law. As we see in flashbacks, Alicia had interviews, but no one was willing to hire her, partially because of her lack of recent experience given her 13 years raising her children, but more so because of her connection to her disgraced politician husband. Only Will, kindly and selflessly, gave her the opportunity no one else would give.

As Alicia delivers her well-received, if interrupted, speech, Will also remembers back to those early days. The two even discuss their current situation over dinner—though they’re not actually dining with each other. Seated next to each other in a crowded coffee shop, Alicia asks Will why he hates her, showing an interesting juxtaposition with the sweet, friendly flashbacks.

It’s about time the show addressed this. Given that Alicia seems to have no qualms about screwing Will over again and again while pursuing her own firm, I’m glad they’re finally remembering their past and talking about their present.

Will admits that “hate” is too strong a word, but why can’t Alicia see that he has every right to hate her? Does she really not know? She totally betrayed him, the one person who gave her a chance when others wouldn’t, and she doesn’t seem to appreciate it at all. And that doesn’t consider their shared intimate history.

For that reason, I, like Alicia, don’t believe that Will would act the same if another employee had done the same thing she did. He doesn’t seem as angry with Cary as he is with Alicia, and they obviously left at the same time. Alicia does prove, though, that she certainly has the killer instinct her old law firm thought she lacked. And at least now there’s the hint of some civility between the former lovers—if not even a chance of reconciliation, of sorts—as they agree to be competitors. Of course, some of us, like me, want more.

Florrick/Agos and Lockhart/Gardner are again competing against each other, but this time with every other firm in Chicago, and for the attention of Rayna Hecht (Jill Hennessy), a popular lawyer with some $60 million in clients. Hecht is in the complete opposite position from the one Alicia was in four years ago: she is sought after and can choose any position she wants. The firms hope to pitch to her, and wait with baited breath for her response. What a position to be in.

Meanwhile, everyone’s favorite loony lawyer, Elsbeth Tascioni (the hysterical Emmy-winner Carrie Preston) returns, and Will gets a deliriously devilish look in his eye as he decides to hire her to help him ward off Nelson Dubeck (Eric Bogosian) of the Office of Public Integrity, who’s in deep pursuit. Dubeck is after Will to incriminate Peter Florrick in the recently resurfaced voter fraud accusations. Elsbeth gets Dubeck to admit, unknowingly on tape, that he thinks Peter is guilty simply because he’s a politician, and that he’s doing what he can to bring Peter down. He even strikes a deal with Peter’s former worker Jim Moody to make Will look guilty.

Elsbeth also has a strange run-in with a giant, anti-Semitic bear, and later reveals that she won the association of the sought-after Rayna Hecht, who chose Elsbeth to start a new firm with—as unlikely a pairing as that seems to me.

So how did you like this episode, Good-Wifers? Did Will and Alicia clear the air enough? Do you think there’s hope for any sort of reconciliation between them? Or would you prefer they didn’t reunite? Are you excited for next week, when Dubeck accuses them of being lovers? And do you think Peter is actually guilty of voter fraud? Discuss in the comments.