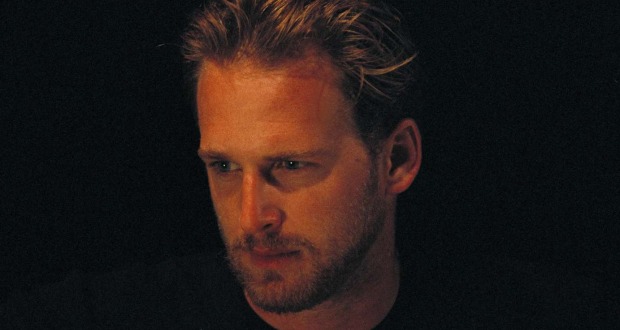 “The Mend” follows Mat and his down-and-out existence into his dysfunctional family dynamic, not to mention his despicable attempts at a relationship with his girlfriend and surrounding characters in his and his brother Alan’s (Stephen Plunkett) life.

“The character was very much written into the script,” says Lucas, in regard to how much he brought to Mat and how much was given to him. “But it was also mysterious in the script. My battle came because [Mat] was highly unlikeable. I had to figure out and talk with John extensively about how to make a character that was that raw and brash and sort of fearless with his lack of self-control an empathetic character. He’s a guy going down – bordering on homeless, enraging everyone in his life without thought, but I was trying to not only be passionate for him but also to make a character that was fun to watch as opposed to aggressive. That was a real tightrope.”

Lucas’s portrayal of Mat contains a bit of physicality like cutting his foot on glass that he didn’t clean up, stabbing a knife into a bathroom door that won’t open and general malaise of his health which culminates in a coughing fit.

“Here you have this guy that is rotting from within, but we really wanted him to be fun to watch,” he describes. “It’s so easy to make a character like that repugnant. The day-to-day battle was to keep him away from that. There are people like this in real life – probably not someone you would want to have dinner with, but you would watch someone else have dinner with him just to see what happens.”

Lucas has worked with Ang Lee, Ron Howard and David Gordan Green, to name just a few in his prolific three-decade career as an actor. He admits that working with a brand new director can be a mixed bag.

“First of all, there is this energy with a new director that is nerve-wracking,” says Lucas. “Directors these days typically get one shot so they have everything to prove [on that first set]. There’s a passion and a fear that goes along with that – both for them and you as an actor. You feel that need to make this work every minute on set.”

He continues, “There’s also a lack of trust that goes along with a new director – a mélange of things both good and bad. What it comes down to, though, is how beautiful it is to watch someone find their voice. In this case, John has a serious voice. It’s going to be interesting to watch him go on to more accessible or more commercial film, but with that same voice present. There are times in my career that I’ve worked with a first-time director that didn’t find their voice, and you can see it and feel it in the film. It’s a painful thing to be a part of.”

When asked why he’s had such a seemingly fearless approach to all the many, many roles he’s chosen, he says: “I wish I could say that I have no fear about choosing roles. It’s more like something comes my way and I need to work and want to work. Now, I’m consistently trying to find things that are good. And when it’s good, I have to look at the risk of it – like this one had super high risk with a script that was totally bizarre on paper, a first-time director, incredibly low budget, a character I didn’t feel a great relationship to – is there a possibility that this is going to be good? And unless it’s a payday (which are less and less these days too) and there’s risk of it not being good, than I won’t take it.

“Acting is interesting,” he continues. “It can be the exploration of your demons which allows you to work them out on screen as opposed to in real life.”