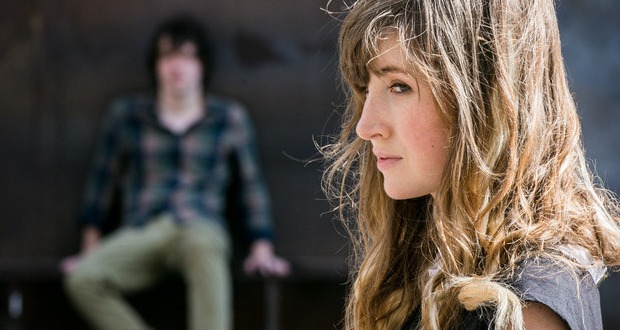 There’s something liberating about sharing pain through watching a movie. You don’t have to sob into their shoulder or deal with the actual messiness of emotional vomiting. Instead, you sit quietly and know that the person giving you the story that’s up on the screen has felt similar pain to you. And in return, they made this story because they were seeking empathetic souls in return.

First-time feature writer-director Zachary Wigon made “Someone Else’s Heart,” the short version of “The Heart Machine,” because he’d gone through a traumatic relationship a while back that involved a lot of web communication.

“The Heart Machine,” starring “The Newsroom’s” John Gallagher, Jr. and “House of Cards'” Kate Lyn Sheil, is about a couple who meet online and begin a serious relationship, despite 3,000 miles of distance across two countries. Suspicions grow and Cody (Gallagher) worries that Virginia (Sheil) has been living in the same city as him the whole time. It’s a story about loneliness and insecurity and what the two combined can do to a relationship.

And as I sat down for an interview with Sheil and Gallagher at SXSW, we all agreed: There’s a lot of pain in this film.

How did you prepare for your role?

JG: It wasn’t hard to prepare emotionally for this role and put myself in the position that Cody is in. I’ve been in relationships where you have the benefit of actually being in the same room with each other and yet still have gone down dark mental alleyways of doubt, jealousy and suspicion. It’s tenfold when you haven’t even been able to touch the person.

JG: I’ve been in situations where a year or two later I suddenly realize that most of my interactions [with my girlfriend] were via email or text. When you have to separate because of work [as actors do a lot], it is a very similar place to be in as Cody and Virginia.

KS: I had one experience very briefly. We began our relationship by talking on the phone for hours and hours and emailing. I didn’t have any video chat capabilities, so there wasn’t any of that going on. It only lasted a few months and unraveled fairly quickly. It was very real feeling, though, despite not being physically in the same place.

Tell me about Virginia.

KS: I think she is a very lonely and insecure person who’s trying to put on a brave face and craft a new persona for herself. We talked about how both these characters are recent transplants to NYC.

Did you think there were any sociopathic tendencies in her?

KS: She has a great ability to compartmentalize, but I certainly didn’t think [she was sociopathic] when I played her. I think she’s a good gal who made a few mistakes. I like people who mess up.

JG: We shot all the Skype scenes in real-time. I was scared in the beginning about the logistics, but Zach made it very clear they were dedicated to shooting those scenes in real time. What’s strange about it is that you feel really self-conscious because you can get in your head too much. I felt like I was doing a monologue a lot of the time, with everyone in the room with me while my scene partner is somewhere else. I had to let go of that early on. Just because I was the only physical entity in the room acting out the scene, that didn’t mean it was all about me. I needed to remember to rely on Kate, even though she was physically somewhere else.

John, do you feel like maybe you’re getting “Good Guy” typecast, like with your prominent roles in “Short Term 12” and “The Newsroom”?

I do tend to play very cut-and-dry good guys, but this one isn’t. Life isn’t. So that’s refreshing. Kate said yesterday, you have to find things to like about anyone you’re playing. And with Cody, I liked the idea of losing control, despite his active and aggressive actions throughout the movie. That’s all because he’s absolutely lost control.

What I really love about this film, and even more so now watching it, is that no one is bad in this. They both walk a kind of questionable line. They have good hearts and are trying to do the best they can. That’s a hard thing to balance when you start out by writing a story about desperation, loneliness and suspicion.