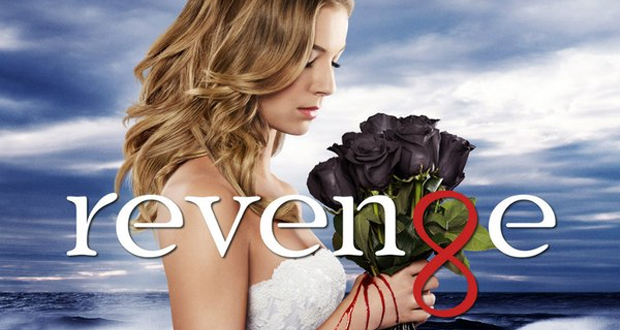 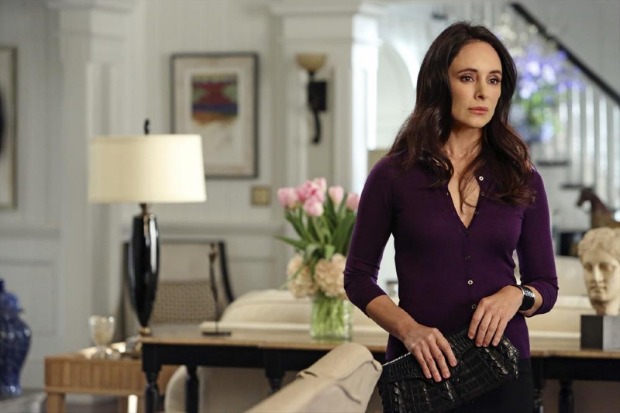 Well, here we go again. Lot’s of action and a whole lotta crazy on “Revenge,” and we gotta luv it! I know I do.

Emily, still having blackouts, takes a knife and stabs the infinity sign that’s engraved on her front porch. After she and Nolan talk, and she tells him she is going to “kill them all” — meaning the Graysons and everyone in her way — he realizes she needs big time help. Nolan recruits Aiden, who luckily finds her in time to save Conrad’s life, although most would be happy if he were gone. Could you believe she broke into his hotel room and was going to kill him with a wire around the neck? Yikes!

Anyway, Aiden tied her hands behind her back and plunged her into ice water over and over again. I never knew that was a way to treat blackouts, did you? Okay, kidding aside, it seemed to work. She did remember catching her father and Victoria in bed and not being too happy. She told Clarke that Victoria hated her, but of course he didn’t believe her. “We’re going to be a family.” That is the last thing Emily (Amanda) would want – Victoria as her mother. Whoa! She and Aiden had one last kiss, and off she went, memory intact (sort of silly).

Meanwhile, the first Mrs. Grayson (Stevie), Jack’s mother, visited him at his bar wanting forgiveness. As of right now, I think I like her. I definitely like that she is giving Victoria a run for her money. Jack wasn’t so sure he wants her in his life, but knowing Jack, he will forgive her and they will build a relationship. I’m just waiting for her big back story. You know she has one.

Patrick, Patrick … Patrick is sort of lost, don’t you think? He’s still a mama’s boy, but has a bad temper. I wasn’t sure what he was doing at Jimmy’s wake (I thought he felt guilty), until he told Jimmy’s buddies that Jimmy was a rapist and spit on his photo, which lead to Patrick getting beat up.

Nolan found this out when talking to him. He doesn’t understand why he is so protective of Victoria (ugh). But alas, Nolan tells Patrick he has an open space for him at the Hampton’s Art Walk. Coincidentally, one of Patrick’s favorite artists is slated to be there, and he needs an apprentice – in Venice! Can you imagine?

Well, of course, Patrick accepted and we should have known – Victoria was behind the whole thing. If we can say anything nice about Victoria, it’s that she really does love Patrick and wants to protect him.

Later, Nolan gave Emily a new infinity box that opens only to her touch. After reading her father’s journal, she believes that Stevie is somehow connected to all of this. She might be the attorney (alcoholic attorney) David was using way back when. Hum. Stevie did tell Jack she used to have a drinking problem. Whatever is coming up next, it’s gonna be good!

Not much happened with Daniel. I’m waiting to see how he will react when he finds out who Emily really is and why she’s doing what she’s doing. He may understand.

The last exciting news was that Margaux’s father, the infamous Pascal, is enroute to New York. I can’t wait. They’ve been holding us in suspense for too long with his character!

What did you think of this episode of “Revenge”? What are you looking forward to? I want to meet Pascal and also know Stevie’s back story.