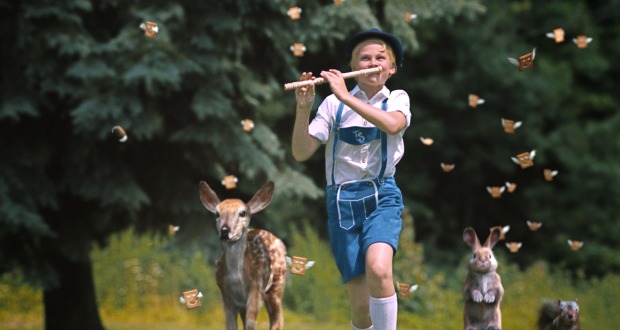 Does ANYONE actually like the Toaster Strudel boy? You know, that annoying kid in the Pillsbury Toaster Strudel commercials who pops up out of nowhere holding a plate of delicious Toaster Strudels that, based on his creepy factor, might possibly contain trace amounts of cyanide?

According to Ad Age, General Mills dreamed up the German boy, named him Hans Strudel, and gave him a backstory – he harks from a mythical island called Breakfürg. They’re hoping to compete with Kellogg’s for breakfast dollars, and brand manager John Williams says Creepy Toaster Strudel Boy is one of General Mills’ largest campaigns.

Sales of the 27-year-old frozen breakfast pastry sagged in 2013, falling by 1.1% to $204 million in the 52 weeks ending in July. By contrast, Kellogg’s Pop Tarts grew 5% to $668 million in the same period. It’s clear the strudel is in trouble; I’m just not sure they’re on the right track with this campaign.

In the Toaster Strudel commercial below, the lederhosen-clad Hans busts down the door of an American family at breakfast time. “Flaky…? Gooey…? Toaster Strudel … ya?” Hans chirps, offering a plate of the warm pastries. He probably needed a distraction to keep the family from calling the cops, so he brought along a deer, a squirrel, and some flying pastries, which PICK UP ONE OF THE KIDS AND HOVER HIM CRAZILY ABOVE THE TABLE – RUN, FAMILY, RUN!!!

The campaign, by Saatchi & Saatchi, New York, carries the tagline “Get Zem Göing.” Or as anyone who crosses paths with the Strudel Boy says, “Please Dön’t Hürt Us.”

There are so many questions surrounding this campaign. Did General Mills not run it on test subjects before investing millions of dollars on its success? Did the test subjects actually like this kid? Did General Mills embed a subliminal message in Strudel Boy to make us run to the story and buy several packages? After the commercial ended, did Strudel Boy use black magic to beam the American family off to his mountain home where he reenacted the final scenes of “Carnival of Souls”? 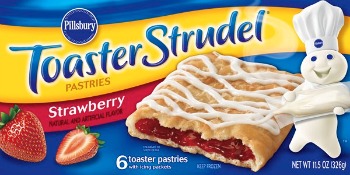 No, apparently they didn’t consider any of that. “When you think about Strudel … you think of Bavaria, you think of Germany,” said Williams, who describes Hans as a “fun quirky, young boy” who brings Strudel “to help with the hectic part of the morning to help get the morning moving.”

Can’t we just stick with the Pillsbury Doughboy? He’s cute and cuddly, not creepy at all. And the last time I checked, he was actually ON the Toaster Strudel package. Or, if he’s busy with other campaigns, maybe they could get some of his cute and cuddly dough-cousins to help sell Toaster Strudels. Just think about it, General Mills, that’s all I ask.