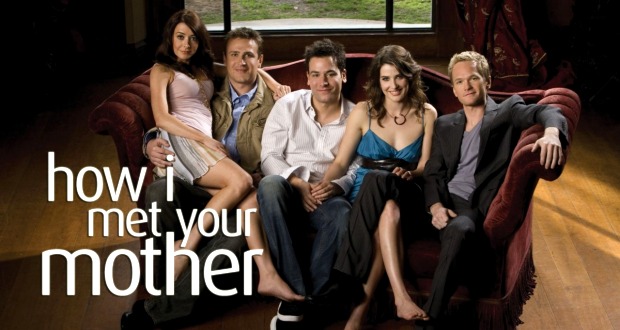 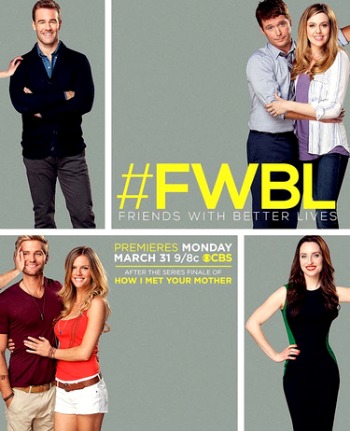 Happy Last Day of March! Here in Traverse City, the bay is still frozen solid and our driveway is a skating rink. But hey, it’s the last day of March, which means April starts tomorrow, which means Mother Nature WILL deliver Spring in the near future. Maybe. Hopefully. It’s been a long winter.

What’s on TV tonight? The Blacklist, Bones, the series finale of How I Met Your Mother, the series premiere of Friends With Better Lives, and James Van Der Beek on E! News. The 16-year-old and I are hate-watching Dawson’s Creek right now. Here’s the rundown.

Bitten | Syfy
Caged
Elena goes against her Alpha’s commands when she embraces her killer instinct to free Clay from captivity. Later, when confronted by Phillip, she’s forced to come to terms with her true identity.

Bones | FOX
The Turn in the Urn
Three people’s remains in a single urn confound the Jeffersonian team after a wealthy artifact collector walks into his own funeral. Meanwhile, Finn and Hodgins strike it rich with their hot-sauce venture, but Finn’s enthusiasm is tempered by devastating news from Michelle.

Dancing With the Stars | ABC – EDITORS’ PICK
Another elimination occurs after the third week of performances, and Robin Roberts serves as a guest judge. The theme for the dances is “The Most Memorable Year of Their Life.”

How I Met Your Mother | CBS
Last Forever Parts One and Two
In the series finale, Ted tells his children the conclusion to the tale of how he and their mother finally became a couple.

Star-Crossed | CW
To Seek a Foe
Grayson continues to rely on Emery, which puts her relationship with Roman on hold. Elsewhere, Zoe sets a black-cyper trap for Taylor, but it backfires and harms Lukas instead, leaving Roman and Drake to find a cure for the poison before it kills him; and Eva continues her search for the truth about Julia’s recovery.

The Voice | NBC
The Battles, Round 2 Premiere
The battle round continues. Coldplay singer Chris Martin serves as an adviser.

Mighty Med | DISXD
Atomic Blast From the Past
Kaz and Oliver revive a frozen-in-time superhero from the 1950s named Captain Atomic. When he is wounded by a contemporary villain, the guys must travel back in time to save him.

Being Human | Syfy
House Hunting
Moving day arrives for the roommates, who discover they aren’t the only ones struggling with leaving the house.

Dallas | TNT
Like Father, Like Son
John Ross races to find funds to keep a lease deal alive, but he may have to betray those who love him most. Meanwhile, Elena and Nicolas set out to divide and conquer, and Ryland’s machinations take an unforeseen turn.

Love It or List It | HGTV
Money Pit
The owner of a historic Victorian home that’s in a central location, but in need of a lot of work is willing to use some inherited funds to update the property, but his partner thinks they’d be better off purchasing a more manageable move-in ready abode.

Swamp People | HIST
Hexed
A cursed area is explored; a team’s boat engine mysteriously breaks down; and a raccoon invades a hunting camp.

T.I. and Tiny: The Family Hustle | VH1
Season 4 begins with T.I. trying to learn more about his daughters’ lives.

The Following | FOX
Freedom
A massacre leads Ryan and Mike into dangerous territory; and information about a potential new leader is revealed. Elsewhere, Joe continues training the Korban cult and confirms plans with Emma.

The Real Housewives of Beverly Hills | BRAVO
Reunion Part 3
Conclusion. The Beverly Hills wives reunite. Included: The ladies discuss their problems with Lisa, and the husbands join the discussion.

The Tomorrow People | CW
Smoke and Mirrors
Stephen tires of Jedikiah’s constant lies about his father, so he makes a choice about his alliances, and he tries to bring in a new break-out to Ultra to see if things have really changed. Meanwhile, Stephen’s brother disappears after Jedikiah forces Stephen to protect him.

Wander Over Yonder | DISXD
The Hero; The Birthday Boy
Wander sets out to fulfill his fairytale dream of rescuing a princess; Wander tries to turn Commander Peepers’ arena of doom into a party palace for Lord Hater’s birthday.

Worst Cooks in America | FOOD
Timer’s Up
The winner is named in the Season 5 finale, but first the final two recruits face off in a cook-off, putting their new skills to the test as they prepare a refined three-course meal in a professional restaurant kitchen in New York City. Judging their dishes are chefs Maneet Chauhan, Spike Mendelsohn and Jimmy Bradley.

Friends With Better Lives | starts at: 9:01 | CBS
Pilot
Jules and Lowell decide to get married after a brief romance in the premiere of this sitcom about a group of thirtysomething pals. Upon hearing the news, Jules’ friends begin to examine their own lives. Meanwhile, Kate tries to prove that she isn’t shallow by allowing Will to set her up on a blind date.

Black Ink Crew | VH1
Cease and Desist
Dutchess returns to town and faces Ceaser for the first time since their problems in Jamaica. Elsewhere, Puma hosts a grand-opening bash for his new shop.

The University of Sing Sing | starts at: 9:45 | HBOe
Inmates go to college and learn valuable life skills to aid in their rehabilitation through the Hudson Link for Higher Education in Prison program at Sing Sing Correctional Facility in Ossining, N.Y.

Archer | FX
Archer Vice: Palace Intrigue: Part I
Part 1 of 2. Archer and the gang stay as guests at a palace.

Cryptid: The Swamp Beast | HIST
The Bayou Beast
A surprise announcement comes from a local family.

House of Food | MTV
Fortitude is questioned in the opener of this series, in which culinary-school students compete in cooking challenges for the chance to win a prized apprenticeship.

Independent Lens | PBS
Medora
The struggles of a small-town high-school basketball team are chronicled. The Medora Hornets of Medora, Ind., have seen better days; as the film opens, they’re mired in a brutal losing streak. Yet, despite the odds, the players refuse to give up hope.

Intelligence | CBS
Being Human
In the Season 1 finale, Gabriel and Riley are shocked to discover there are foreign sleeper agents in the U.S. government. Even more surprising are the true identities of the spies.

Lords of the Car Hoards | DSC
What’s a Partner For?
Two 1955 Pontiac Chieftains are customized.

Lost Girl | Syfy
Origin
Bo is uncertain about assuming her role in a prophecy foretold by an order of knights until a surprising source helps her to choose.

Mystery Diners | FOOD
Dinner Drama
The owner of Encore Dinner Theatre in Tustin, Cal., calls in Charles and his team to investigate if a relationship involving a waiter and an actress is creating drama and negatively affecting customer service.

This Is Hot 97 | VH1
Not That Kind of Show
Ebro tries to book a big celebrity in the series premiere of this unscripted show charting the goings-on at a hip-hop radio station in New York City.

Chozen | starts at: 10:31 | FX
The Battle of Broken Spear
Chozen and Phantasm face off at a music festival in the Season 1 finale.