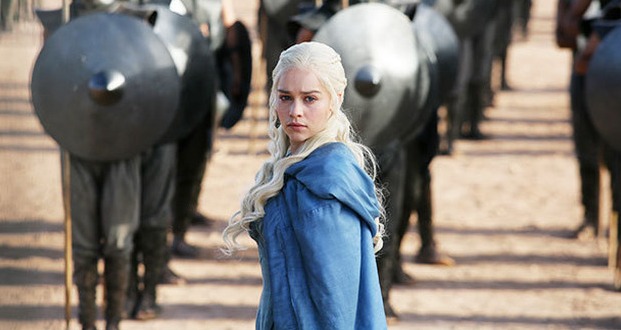 What’s on TV tonight? Glee, Long Island Medium, Marvel’s Agents of S.H.I.E.L.D., the BBC’s 24 Hours on Earth, and Game of Thrones: The Politics of Power: A Look Back at Season 3. Here’s the rundown.

Dance Moms | LIFE
No Solo for You (Choreographer’s Cut)
Enhanced episode includes additional dance scenes. Abby gives Kendall a solo, much to the dismay of Kira who wanted Kalani to compete against Maddie, because she fears Maddie will lose.

Glee | FOX
City of Angels
The glee members head to Los Angeles for Nationals with two additional guests in tow.

Long Island Medium | TLC
On the Road: San Francisco
Theresa’s in San Francisco, where she visits the Haight-Ashbury district, rides cable cars and tours wine country, but also helps some area residents, including a woman who survived an accident that took a friend’s life; a woman whose mother was murdered; and the youngest survivor of the 1978 Jonestown massacre in Guyana.

Marvel’s Agents of S.H.I.E.L.D. | ABC
Yes Men
When Asgardian enchantress Lorelai journeys to Earth, Agent Coulson and S.H.I.E.L.D. team up with the Lady Sif to stop her.

Pretty Little Liars | ABCFAM
Unbridled
The girls take part in a bridal fashion show for charity in order to get closer to Ali’s mom, who they suspect may be hiding some secrets. Meanwhile, Ella and Jason return to town; Aria continues to cope with her heartbreak; and Hanna tries dating again.

The Originals | CW
Farewell to Storyville
Klaus, Elijah and Rebekah become trapped in the City of the Dead cemetery by a witch’s boundary spell. Klaus and Rebekah trade angry accusations until Elijah reveals a dark secret from the family’s past. Meanwhile, Marcel races to free Rebekah but he has to make a deal with Genevieve.

24 Hours on Earth | BBC
Part 1 of 2. An exploration of how animals and plants adapt to exploit the 24-hour cycle.

Dance Moms | LIFE
Blame It on the New Girl
Abby’s new completion team starts to take shape; a new girl tries out for the dance troupe; Cathy prepares her team to end Abby’s winning streak; Abby’s girls dance at a nursing home to cheer up her ailing mother.

Face Off | Syfy
Mad Science
Human guinea pigs are created by the artists, who are given bizarre medical devices to inspire their makeups.

New Girl | FOX – EDITORS’ PICK
Fired Up
Jess hires Coach to mentor the volleyball team at her school, but she must fire him soon after. Elsewhere, Schmidt is hit with a lawsuit and asks Nick and Winston to represent him at the deposition; and Cece is pursued by a much younger man.

Rizzoli & Isles | TNT
Food for Thought
Mysteries surround the death of a food-truck chef, with clues pointing to a poisoning. Meanwhile, Tommy makes a big announcement, and Maura’s birth mother tries to make amends with her daughter.

The Little Couple: Big Updates | TLC
Zoey Makes 4
In an enhanced episode, Jen and Bill go to India to pick up their adopted daughter, Zoey, but they wonder how Will will react upon meeting his new baby sister.

The Real Housewives of New York City | BRAVO
If You Can Make It Here
Heather hosts her own birthday bash in the Season 6 opener. Also: Aviva tries to make amends with Ramona; and the ladies are introduced to Heather’s friend, Kristen Taekman.

Twisted | ABCFAM
The Son Also Falls
Jo runs for study-body president and requests campaign assistance from Charlie. Meanwhile, Danny feels like he’s being haunted by Vikram; and Jack’s daughter returns to town after getting expelled from boarding school, and she quickly befriends Lacey.

About a Boy | starts at: 9:01 | NBC
About a Godfather
Will struggles to pull off a guys’ night out. Later, Andy asks Will to be his son’s godfather.

Brooklyn Nine-Nine | FOX
Fancy Brugdom
Charles asks Jake to be the best man at his wedding, a role that requires Jake’s involvement in planning. Elsewhere, Terry, Amy and Gina start a new extreme diet; and Rosa makes a genuine apology—with some assistance from Holt.

Growing Up Fisher | starts at: 9:31 | NBC
The Date From Hell-nado
The Fisher family begins dating at the same time in the wake of the parents’ separation. As Mel and Henry pursue a mother and her daughter, Joyce panics over dating and tags along with Katie at a carnival.

Chicago Fire | NBC
A Rocket Blasting Off
Det. Lindsay narrows down potential suspects in Keeler’s disappearance, and Severide’s motives place him at the top of her list. Elsewhere, Jones’ disruptions are noticed by headquarters; and Hermann and his wife celebrate their 20th anniversary, but his idea for a gift may be ill-advised.

Chrisley Knows Best | USA
Patriarch of Perfection
In the opener of this reality series, the patriarch of a wealthy Southern family micromanages both his career and home life, creating no small amount of drama in the process.

Clash of the Ozarks | DSC
War Bug
Kerry misses out on a lucrative land deal; surveyors are spotted on Crow’s land.

Cougar Town | TBS
Too Good to Be True
Travis starts an open mike at Coffee Bucks, but probably wishes it were closed when Andy starts doing stand-up comedy. Meanwhile, Tom gets a visit from his daugher, who’s under the impression that her dad is much cooler than he actually is.

Ink Master | SPIKE
Tatt Ganged
Bikini-clad twins get inked by the remaining 10 artists all at once; an injury sends one artist to the emergency room.

My Big Fat Geek Wedding | Syfy
A couple who met while playing the video game Final Fantasy plan a medieval-style wedding, complete with a castle venue, elaborate costumes, props, a sword fight, and a dragon surprise.

The Little Couple | TLC
The Unexpected
Jen begins to feel ill on the way to New Delhi while she and Bill are in India to pick up their daughter, Zoey, and she must make a difficult decision that will affect the whole family.

Tosh.0 | COMEDY
Daniel speaks to Congress in an attempt to boost C-SPAN’s ratings; and eats lunch with a homeless man. Also: A kid who’s forced to get a job gets a Web Redemption.

Wildest Things With Dominic Monaghan | BBC
Part 1 of 2. Dominic counts down his wildest moments from Season 1, including an epic nap with a giant python and a dangerous encounter with a venomous spider.

Perception | starts at: 10:01 | TNT
Cobra
Pierce receives a tip that the CIA might be assassinating U.S. citizens, a development that turns more complicated when Pierce’s close friend is murdered. Meanwhile, Moretti confronts her trust issues with Donnie.

Chrisley Knows Best | USA
Not So Sweet Sixteen
Todd micromanages his daughter’s 16th birthday down to the length of her party dress.

House Hunters International | HGTV
Pet Peeves in Belize
A woman’s passion for animal rescue prompts her to move to San Pedro, Belize, where she searches for a place to live with help from her mom.