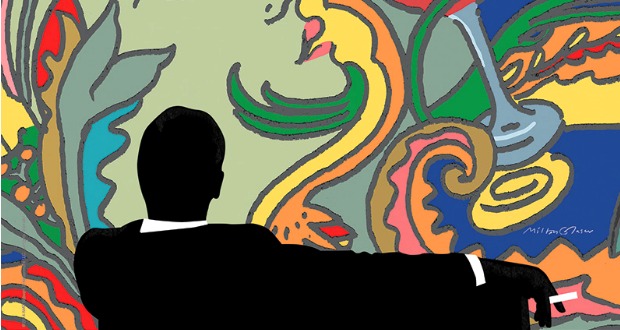 AMC has unveiled the official poster for the final season of Mad Men, designed by renowned artist Milton Glaser. As Glaser explains in an exclusive interview with AMC, the imagery plays on recurring themes from the series,”notably the head of a woman and the wine being poured.” 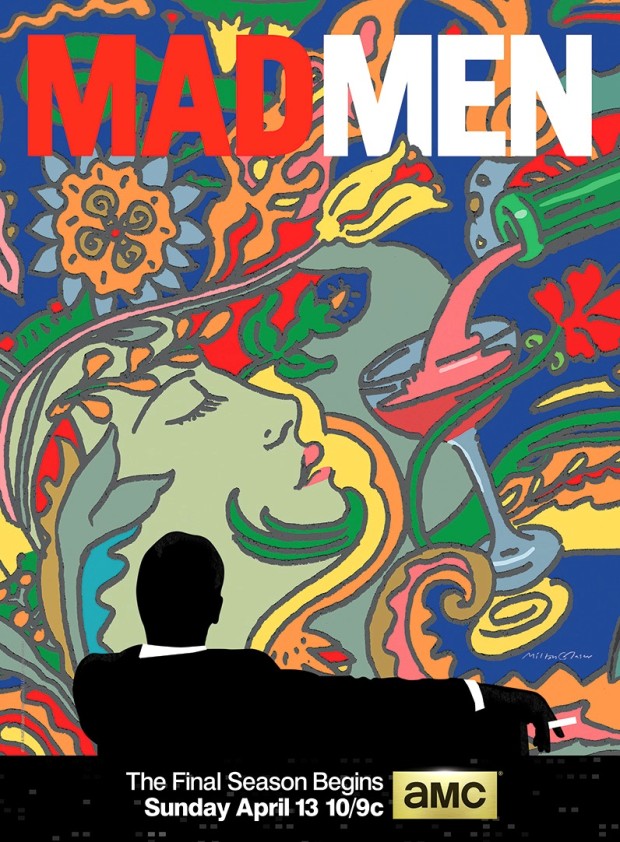 Another familiar element that Glaser incorporates is “the figure that has become symbolic of the program” — the iconic silhouette of Don Draper from the show’s opener. Juxtaposing Don’s original Season One image with psychedelic art indicative of the new season was a challenge that Glaser happily accepted, and the result is, as he puts it, “harmonious and convincing as a single experience.”

More from the interview with iconic artist Milton Glaser:

Q: You’re responsible for so many iconic images — the “I Love New York” logo, Bob Dylan’s Greatest Hits album poster, the DC Comics logo. Is there a piece of work you’re most fond of?

A: It’s a lot like having a lot of children — it’s very hard to pick the one that I love the most. But when I’m finished with a job, I’m finished with it. And it just sort of goes into the storage room, and I’m on to the next. Truthfully, I’m more interested in what I’m going to do than what I’ve already done.

Q: Were you a fan of the show before being asked to contribute art?

A: Yes! I watch it all the time. It was an environment that I grew up in. I had a lot of friends in the advertising business, and it was a growth of a particular moment in the advertising world. I used to work for ad agencies frequently — a lot more then than I do now. So I knew the world. And ‘Mad Men’ is a really wonderful re-evocation of that time.

Q: Tell us about your process. Was it any different for this project?

A: I liked the show, and I like the intelligence of the people who were approaching me. And I thought, let’s give it a try. And the boundaries seemed well-established, which is to say that they wanted something suggestive and powerful and certainly vigorous in color. And it had to be very assertive. It also had a technical problem of reintegrating the figure [of Don Draper] that has become symbolic of the program and making it look as though it worked together with a totally separate piece of art, which that’s not so easy. The two things have to be harmonious and convincing as a single experience.

Q: The idea was originally to do an abstract. How did the figure of the woman that Don Draper is facing come back into play?

A: In the process of doing it, it just felt more convincing and more interesting to have some figurative element, notably the head of a woman and the wine being poured. So we moved away from the idea of having a sort of wallpaper extraction that would sort of symbolize the moment towards having a bit of narration where the characters in the image are related to a story that as going on.

Q: What was it like trying to re-evoke your style from that era?

A: Sometimes the problem you have is that you can’t do what you once did, especially at my age. But the real issue is the definition of the problem itself: This was supposed to evoke a feeling of what that moment in time felt like for people who actually experienced it, right? But most of the people who watch the show didn’t live through that era, so it’s a funny idea of simulating for people of what they don’t have any memory of and convincing them in a way that this is what it was like … It’s a complex philosophical issue.

Q: How important is it to you that a new generation of viewers connect with what the era was about?

A: Everything we know is in the brain and not actually out there. There’s no reality out there. So that era was different for everybody, but, for me … I was being influenced by very strange things like Art Nouveau and other things that seemed significant at the time because they were deviations from modernism. But it was that departure from all the modern work that was going on at the time that made my work characteristic.

Q: What do you remember most about those years?

A: I knew [Bob] Dylan, and I worked a lot for Albert Grossman who was a friend who represented the band and represented Peter, Paul and Mary. I was sort of in the middle of it. I helped Dylan find a house in Woodstock, and to some degree I was part of that in terms of the friendships that I had developed during the period. A lot of people know the Dylan poster, and to large degree because it’s Dylan, but also because it circulated by the millions with that last album of his and became — if you want to use the phrase — iconic of the period.

Here’s the “Mad Men” Season 7 teaser trailer, which basically tells us, well, nothing.