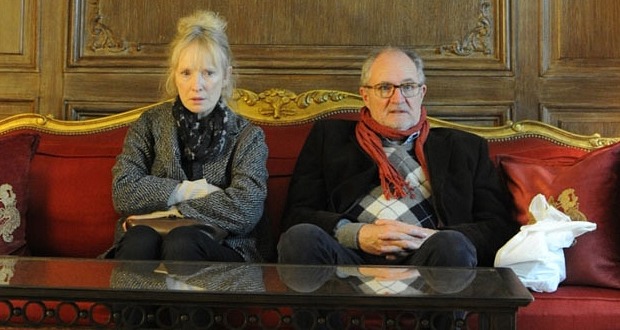 The film for “the rest of us” (i.e., those of us in … ahem … the second half of life) opens in theaters March 14, 2014. It’s unusual to see a film that explores the relationship between a long-married couple, but that’s what you get in “Le Week-End,” about a British couple spending a weekend in Paris. See Vera Marie Badertscher’s review of the film.

Jim Broadbent can break your heart with a single expression. Both his still-beautiful wife, played by Lindsay Duncan, and Paris seem to reject him at every turn. Their marriage is hardly stable, and their little vacation thrusts them into a confrontation with the truth.

Jeff Goldblum plays a friend in a role that has become his stock in trade – a simultaneously charming and obnoxious man who sometimes says inappropriate things.

In “Le Week-End,” screenwriter Hanif Kureishi and director Roger Michell (who brought us “Notting Hill” and “Venus”) achieve an understated intensity that is true to life and unusual in today’s movies.

“Le Week-End” is the anti-blockbuster. There is nothing rote or predictable about it (except perhaps the casting of Jeff Goldblum), and despite the melancholy that permeates a lot of the scenes, it ends on a high note.