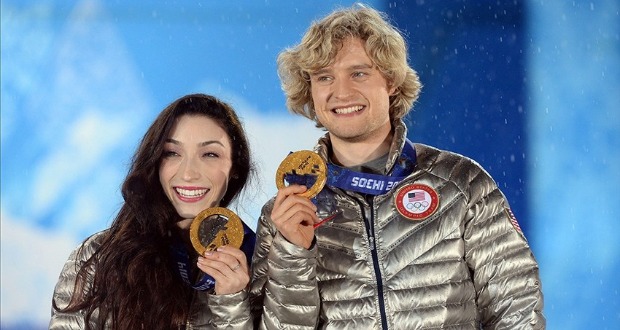 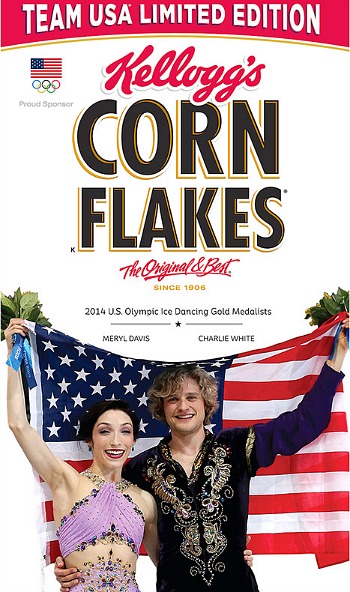 (Editor’s Note: This piece was co-written by Lisa Iannucci and EJ Garr.)

By now all of America knows the story of Olympic ice dancing duo Charlie White and Meryl Davis. The pair teamed up when they were only eight years old, skating together longer than any other U.S. ice dance team. Their hard work and dedication culminated in winning the first USA gold medal for ice dancing at the Winter Olympics at Sochi.

Following their victory, the ice dancers were presented with a Kellogg’s Corn Flakes box with their photo on it. We had the chance to talk to them about their success, choreography, music, Team Kellogg’s and more.

Other than your coach, Marina Zoueva, and your moms, who are obviously such major influences on your careers, who else would you credit with your success?

Meryl: Our sponsors have been a huge part of the last year. Working with Team Kellogg and the support they have given us is like being a part of a family who has been there for us along this journey. And also the athletes we’ve met along this journey. We’ve really become a very tight-knit group of people. Being here with Sarah Hendrickson and Kristi Yamaguchi, for example, we support each other. It’s great to talk about our stories.

There are so many different components to creating what you guys created to win the gold. Talk about the influence that your choreographer, Derek Hough, had on your victory, and the choreography he created for you.

Charlie: We were so fortunate to be able to work with Derek. He’s a genius. He’s got a sense of what looks good on the dance floor, and he’s a great person to be around. He has wonderful energy and we really try to absorb that and put that feeling of exuberance and the love of dance when we’re out there on the floor at the Olympics. We were able to just chat with him briefly after and say “Thank you so much for being part of our Olympic season victory coming true.” He’s such a nice guy, and he’s always so humble. It was a great thing for us to meet him.

Part of the confidence in your skating is how much you trust each other. Have there been times when you’re learning a new move that you’re concerned about what the other one can do?

Meryl: No. You know, we’ve been skating together since we were eight and nine years old, well before we tried anything that was super dangerous, like the tricks that we do now. We’ve developed a really close bond. I especially need to trust Charlie when I’m doing moves where I jump off his shoulder and he catches me or something like that. I’m so lucky to have a partner who I know is going be there for me. Our very long relationship, our trust that we have in each other, and our understanding has played a really large role in our success.

You can honestly say he’s there to catch you when you fall.

Meryl: (laughter) Hopefully before I fall.

What about the music? How important is it in your success?

Charlie: It’s a very difficult process, and it doesn’t get any easier as you get older. I think your expectations are so high that you really have to find music that is going to suit you and suit the moment. For us, the Shahrazad music was something that we had loved for a long time. A few years ago, we thought maybe we should skate to it this year, and we talked to our coach Marina about it and she advised us to wait and use it. It’s from a Russian composer, Rimsky-Korsakov, and she said, “That would be perfect for the Olympics,” and we couldn’t have agreed more. The story is so captivating, the music was powerful, it was everything that you needed in a program that you want to make Olympic-worthy and bring Olympic gold to. So we put a lot of thought into it, but in the end, Shahrazad was a no-doubter.

The violin bet was great. Why not have had Meryl do something too?

Charlie: (laughing) I gave in way too easy, I think. I don’t know what I was thinking when I agreed to that. I should have known better. It was a fun experience. Those guys on ‘The Today Show’ are just a great group of people. They were egging me on pretty good, and they were clapping along with me, so it gave me a little bit of confidence. I’ll tell you, I was really nervous.

You have the honor of being in the same company as such athletic legends as baseball player Derek Jeter, swimmer Michael Phelps, and gymnast Gabby Douglas, who had their face on a Corn Flakes box. How cool is that knowing not only are you both Olympic legends, but you’re legends in the same category as these athletes as well?

Meryl: It’s so cool! For the 2012 games, I remember seeing Gabby on the cereal box and being in a kind of awesome moment at the games, so it’s exciting to join such amazing company. It’s really exciting for us. Through Kellogg’s, we have what’s called a “Start Story” online where we all provide a breakfast to a child in need when someone shares our story online. Things like that really bond people, and it’s just a really exciting group to be a part of.

Charlie: We’re just so fortunate. Kellogg’s is obviously a Michigan company, and we’re from Michigan. They’ve helped us start the day right since we were kids, so being pictured on the Kellogg’s Corn Flakes box is a reminder of what we’ve achieved, and we’re just so grateful.