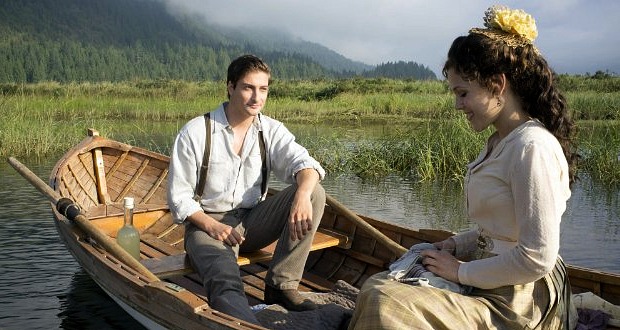 Erin Krakow stars as Elizabeth Thatcher in “When Calls the Heart,” the Hallmark Channel’s adaptation of Janette Oke’s novels set in 1910. The show airs on Saturday nights at 9/8c and is four episodes away from the end of season one.

Shot in British Columbia, the show also stars Lori Loughlin (see my article based on a group interview with Lori) and Australian actor Daniel Lissing, who plays a Mountie with eyes for Elizabeth.

I’m so used to television with an edge these days that at first, I didn’t think this family show would be my cup of tea, but I have really enjoyed it and look forward to finding out what will happen in each episode. Janette Oke is reportedly so pleased with the adaptation that her writing has now begun to be inspired by the series.

Erin and I chatted on the phone about her experiences with the show, including working with executive producer Michael Landon, Jr.

Talk about portraying someone in this time period. Are they dressing you in corsets? Is it restrictive?

Yeah … and yeah. The corset is actually super helpful. It really helped me develop this character in some ways. It just affects the way you move, the way you carry yourself. But yes, I am wearing a corset under every costume that isn’t a nightgown, and they just found some amazing, true vintage dresses and skirts. I feel so lucky to get to wear these things every day. They’re so gorgeous. But at the end of the day, I’m thrilled to take off that corset because then, I can finally breathe.

But it’s really just the greatest gift to show up to work every day and travel back in time. I feel so lucky that I’m surrounded by a crew of such talented people who really do that work for me. I’ve said it before, and I’ll say it again – I really just have to show up with the character created and tell the story as best I can because the world has already been created for me. The production designer – they’ve built these sets that are out of this world – the costumes, the props, everything involved.

It sounds like you didn’t really need to do any research into the time period because it was all supplied for you.

Well, I think what I’m saying is I could have gotten away without doing research given everyone else’s hard work, but I certainly did my fair share. There was a lot of reading, character development, and even some work with my handsome costar, Daniel Lissing.

Is there anything that you discovered in that research that surprised you?

There was a funny list of rules for the school teacher of that time and discovering the things they could or couldn’t do…. It was interesting to see what was expected, particularly of young women of that time period.

What do you appreciate more about modern life after having sort of lived in 1910?

In the first episode, you’ll see Elizabeth – she realizes she has to use an out house. I think I would probably struggle with that. I like the idea of indoor plumbing. That’s a luxury I can appreciate. And electricity is pretty great!

Talk about working with Lori Loughlin and Daniel Lissing.

Lori is such a dream. She’s so gentle. She’s so graceful and lovely and funny. And I’m really learning from her every day. She has such an ease about her. She’s so professional, and she has such great ideas. It’s really very easy working with her.

And Daniel is constantly cracking me up. He’s really very silly. He can also be very serious, and we have so many scenes together that luckily, we share a similar process. We enjoy rehearsing together. And he’s just a great guy. We hang out on weekends; he’s a good friend. I know I’m a broken record here, but I just feel so lucky getting to work with them.

And what about Michael Landon, Jr.?

Well, he’s so funny, too, and I feel like I have to say this in every interview because I want the world to know how silly he really is. But what a dream to get to work with him. He’s such a good person. He has a heart of gold, and he’s so creative…. He’s a good captain of the ship.

What I like is that the episodes are heartwarming without being sappy, which I think is a difficult balance.

Yeah! Well, thank you for saying that. I feel that way, too. There’s a lot of parts to our show, and something that makes it really special is that you can watch it with anyone in your family.

Is there talk of a season two yet?

Oh, there’s certainly talk. Nothing has been confirmed. We’re having an outpouring of support from our fans, especially on Twitter and Facebook.

Does the first season come to a conclusion, or does it end with a cliffhanger?

You are going to get a pretty solid balance of both. I think you’ll have the satisfaction that you want, but there will be some things left in the air. I think people will be so excited by our last episode of the season.