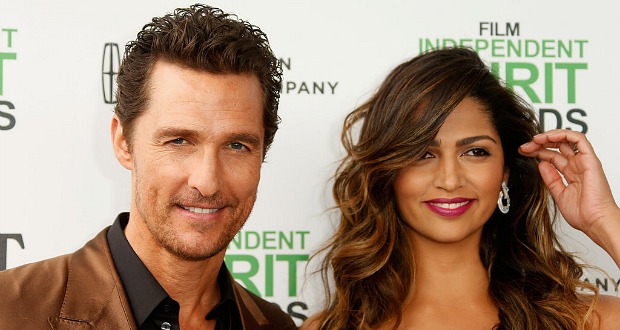 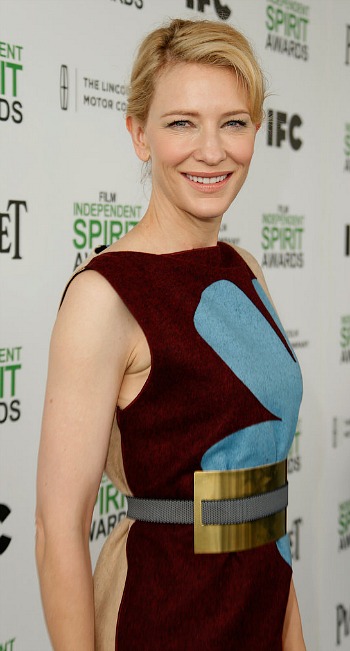 When Blanchett went to the stage to receive her trophy, she asked, “Does anyone know the answer to this question? Why are there only five nominations for women when there are six for men? Did anyone see Greta Gerwig in ‘Frances Ha’?” Blanchett noted that the rich female performances of the nominees proved “that audiences are interested in stories led by women.”

Dressed in a shiny brown suit, McConaughey bounded to the stage to collect his best acting prize and began with his trademark, “All right, all right, all right!” He took the occasion to draw attention to another independent film in which he starred, “Mud,” directed by Jeff Nichols, which received the Robert Altman Award, and which co-stars Sarah Paulson and Reese Witherspoon.

“It’s a really good strong year for independent film,” McConaughey said that when it came to movie roles, “As an actor I am going to choose the experience.” He noted of indies, “when you don’t have enough money, enough time, when you’ve only got one take, there’s a freedom that comes with that; you have to become more creative.”

He added, “You don’t know if they’re going to live on,” he said of films, but to do that they must have “some importance.” They must be “good for you and entertaining and that’s what we got away with in ‘Dallas Buyers Club.'”

Angela Bassett, who is Honorary Chair of the Film Independent Spirit Awards, presented the last trophy of the evening for best film, to the Fox Searchlight epic, “12 Years a Slave.” The film led with most Indies awards, including for best screenplay to John Ridley, best supporting actress to Lupito Nyong’o and best cinematography to Sean Bobbitt.

Actor and comedian Patton Oswalt was host of the evening. Compared to previous years, his monologue was less biting and blue. “You know it’s a heavy movie season when the most optimistic movie is called “All Is Lost,” the host began.

He did manage to get in some zingers. Many celebrities braved the rain to get to the venue, which is a tent on Malibu beach.

Last week’s New York Magazine cover story is written by Baldwin, who says of New York, “I give up.” I guess no one told the short-fused actor the paparazzi are even more aggressive and brutal on the West Coast.

Oswalt also took swipes at Bruce Dern, nominated for best actor for Alexander Payne’s “Nebraska,” mostly directed at the actor’s age. “You are old!” Oswalt told him. “I’d like to get together with you and hear about how ‘Nebraska’ was made. Not the movie, the state.”

Dern made a show of taking out his hearing aids so he couldn’t hear the jabs. The 77-year-old actor, who has the role of a lifetime, sat at a table next to his daughter Laura, who on the red carpet spoke of how she’d starred in another Alexander Payne film, “Citizen Ruth,” some 18 years earlier.

McConaughey and Reese Witherspoon gave out the first awards for the evening, for best first screenplay to Bob Nelson for “Nebraska.” Nelson said he was probably the oldest person to ever receive the award. This was the only award of the evening for the terrific black-and-white film.

McQueen, who received the best director award for “12 Years a Slave,” spoke in his acceptance speech of how his life was changed when he first saw a John Cassavetes film. But he dedicated his prize to Solomon Northup, whose life and memoirs were the inspiration for the film.

At the end of the evening, when “12 Years a Slave” received the Best Feature Film Award, McQueen went to the stage with a large group of producers, who included Brad Pitt, and paid special tribute to actors Michael Fassbender, called him “a genius” and said “there was nothing he wouldn’t do,” and to Chiwetel Ejiofor, for “the most nuanced performance you’ll ever see.”

One of the highlights of the evening was the best supporting actress award to this year’s “It” girl Lupito Nyong’o, for her portrayal of tortured slave Patsy in “12 Years a Slave.”

“Not a bad way to celebrate a birthday,” beamed the beautiful, baby-faced actress. In her acceptance speech she said she had not been aware early in her career of the distinction between independent and studio films, but later realized, that ‘independent film is where stuff actually happens.” Nyong’o thanked her youthful mother – who was there – for encouraging her to become an actress, and told co-star Michael Fassbender, “You scared and dared me to go to places I didn’t know I could go.”

Jared Leto, who received best supporting actor honors, looked rock star cool in a black leather jacket. He’s been giving some of the most entertaining awards speeches of the season and he didn’t disappoint at the Indies. He singled out Bruce Dern, “the youngest, most inspiring actor in the f….king room.” Leto jokingly said he would pull the opposite of a McConaissance, and from now on  “do romantic comedies.” He also thanked, “All the women I’ve been with and all the women who think they’ve been with me.” He gave a bizarre shout out to Nyong’o, who he called his “future ex-wife.” Then in a serious shift, he thanked the “LBG community,” to whom he dedicated his award.

Best First Feature award went to Ryan Coogler for “Fruitvale Station.” An emotional Octavio Spencer, who co-stars in the film, presented Coogler with his award.

“This is Martin Bonner” won the John Cassavetes Award, which is given to a film made for less than $500,000. The director Chad Hartigan pointed out the film cost only $42,000, and he was not pointing that out just for “cheap applause.”

“20 Feet from Stardom,” about back up singers to the world’s most legendary musical performers, won for Best Documentary. Darlene Love, one of the subjects of the film, said of the win, “Dream big. God will never disappoint you.” Morgan Neville, the excited and happy director, noted he never expected his documentary to win.

The following is a complete list of the winners: