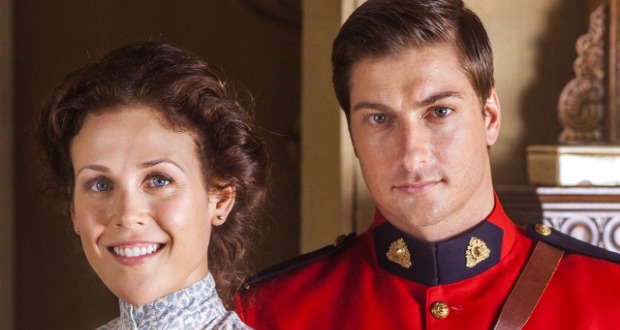 It seems our world runs at a breakneck speed these days. We multi-task our lives, update our Facebook statuses much too often, tell the world about what’s happening in 140 characters or less. Even our lexicon has been truncated to fit our speeding times (“She’s going on ‘vacay’. How ‘ridic’ is that?!”).

RELATED: Lori Loughlin on “When Calls the Heart”

The same goes with relationships – in the real world and in various forms of entertainment. We dive headfirst into relationships (even marriage for some) and then wonder years, months, weeks later why it didn’t work. Perhaps we hit our head at the bottom of the dating pool when we dove in.

On television, it used to be our favorite characters built up that slow burn of attraction that culminated into that first kiss, first date, first intimacies, first anything. Look at how long it took for “Remington Steele’s” namesake and Laura Holt; “Hunter’s” Sgt. Rick Hunter and Sgt. Dee Dee McCall; or “Moonlighting’s” Maddie Hayes and David Addison to get to that first kiss. Now, it seems our favorite TV characters fall into bed before the mid-season break and have that first kiss after!

Of course, that’s not only due to the got-to-have-it-now mentality today but also the networks’ love of the axe and lack of faith in nurturing an audience for their shows. Productions have to bring it all to the table and worry about the aftermath later.

RELATED: Erin Krakow on “When Calls the Heart”

So it’s nice to see a network like the Hallmark Channel produce content like “Cedar Cove” and “When Calls the Heart” that go back to simpler times, emphasizing family values and relationships. Wholesome content that the whole family can enjoy where parents don’t have to fear an episode will have an “MA” rating.

Don’t get me wrong. I enjoy those gritty dramas, shows with “MA” ratings like “Banshee” or “Game of Thrones,” and shows where the characters fall into bed before the mid-season break, but it’s also great to see shows that harken back to simpler times, building up the attraction between the love interests – where a smile, a touch, a meaningful glance teases the viewer and keeps them coming back, ravenous for more.

When Jane gave me screeners to “When Calls the Heart,” she knew it was a show that would be right up my alley. She was right. The show reminds me of “Little House on the Prairie,” a series I watched faithfully as a child every Monday night. It wasn’t much of a surprise when I discovered that “When Calls the Heart” is produced by Michael Landon, Jr., son of the executive producer and star of “Little House on the Prairie.”

Based upon a series of bestselling novels by Janette Oke (also the author of “Love Comes Softly” – one of Hallmark’s highest rated movies), “When Calls the Heart” follows the city-bred Elizabeth Thatcher (Erin Krakow) as she takes a teaching post out in the remote town of Coal Valley. Accustomed to maids, hot baths, and indoor plumbing, Elizabeth is a little out of her element, but befriends most everyone in the town except for the new Constable, Jack Thornton (Daniel Lissing).

Thornton believes Elizabeth’s shipping tycoon father made arrangements for the Mountie to watch over the sleepy little town of Coal Valley (and subsequently, his daughter as well). Of course, when two young, good-looking people find themselves the only young, good-looking people about town, romance is bound to blossom. The chemistry between Krakow and Lissing is almost palpable and is even evident in interviews with the pair as they promote the show.

The show also stars Lori Loughlin (“Full House,” “90210”) and guest stars 80s heartthrob Jack Wagner in a few episodes. Can a guest stint from John Stamos or Candace Cameron Bure be far behind?

The Season 1 finale of “When Calls the Heart” airs Saturday, March 29 at 9pm/8c. Previous episodes can be viewed at HallmarkChannel.com/WhenCallstheHeart or purchased on iTunes.