“The Grand Budapest Hotel” has wit and emotion and inhabits a magical universe that could only be dreamed up by Wes Anderson.

It’s the director’s best film to date and also on track to be his most successful. It opened Friday, March 7, in only four theaters in New York and Los Angeles. Fox Searchlight is rolling out the film slowly to take advantage of strong word of mouth and favorable reviews. As of March 16, Box Office Mojo reports the movie earned $4.7 million domestically and $20.1 million in foreign sales. It’s also a critical success, registering 91 percent on the Tomato-meter. As for awards, last month, the film was honored at the Berlin Film Festival with the jury grand prize.

Next year, the production design by Adam Stockhausen (“12 Years a Slave”), the music by Alexandre Desplat (“Philomena”), as well as Anderson’s direction and his screenplay, which he co-wrote with his pal Hugo Guinness, are sure to receive Oscar nominations.

“The Grand Budapest Hotel” is a comic caper that follows the misadventures of M. Gustave (Fiennes), the dashing but fey concierge of the opulent hotel of the film’s title, and his protégé, the loyal and naïve lobby boy, Zero Moustafa (newcomer Tony Revolori). The idiosyncratic story-within-a-story blends deadpan slapstick with heartfelt nostalgia and revolves around the guests and staff of the jewel box of a pink concoction, located in the fictional alpine town of Zubrowka.

The stories span from the 1930’s through the 1960’s, from the Communist takeover and beyond to the 1980’s. There’s also a nostalgic look back to the era of the belle époque. Anderson said the movie is inspired by the comedies of the 1930’s and the stories and memoirs by Jewish Viennese writer Stefan Zweig, who committed suicide in 1942.

The revolving door of zany characters include a military policeman (Edward Norton), a scary bald prisoner (Harvey Keitel), a hit man (Willem Dafoe), the head of a secretive brotherhood of concierges (Bill Murray) and an octogenarian countess (Tilda Swinton under aging makeup). The caper begins when the countess, who Gustave once bedded, dies and leaves him a valuable painting, which prompts her vindictive son (Adrien Brody) to frame him for murder. In the mix is a sweet love story between Zero and the local baker, Agatha (Saoirse Ronan), who has a birthmark on her face the shape of Mexico.

With his courtly manners and halting stop-start way of speaking – along with his charming Texas drawl – Anderson could be a character out of one of his movies.

Here are some highlights from the junket:

On how he envisioned Ralph Fiennes as the funny character Gustave.

Wes Anderson: I had wanted to work with him, just in the abstract, because I think he’s such a great actor and such a powerful actor. But I had seen him in a couple of funny things, like “In Bruges — he’s very funny in “In Bruges” — and I’d seen him in a play that he was very funny in, too. I’d gotten to know him a little over the years, and I just thought he would be the guy. And to me it never seemed… I didn’t have any question about it.

But I will say, people were kind of like, “Are you sure? Is that right for this?” I think we put people in a category because of what’s familiar with them, but I feel like most actors, if they make the character feel real, then they can probably take it anywhere you want, a great actor. I don’t really see a clear line between comic and dramatic, you know? I sort of see them as the same. It’s just, you shift it a little this way or a little this way.

On his production design choices and how he decided whether to shoot a scene as live action or animation.

Wes Anderson: Somewhere along the way, there are certain things that I think maybe if we use a sort of old-fashioned technique, let’s say, for a way to express some part of it that it might let us design something from scratch that we otherwise would be trying to adapt. For instance, the whole exterior of the hotel. Well, the whole mountain, or whatever it is, where this hotel is, is a painting. And that was really because I didn’t find what I wanted. I found ideas for what I wanted, but I didn’t find the real thing.

So then I thought, “Well let’s just make a miniature,” because we know how to do miniatures, because I’ve done ‘em on the animated movie. And then there was this painter, Caspar David Friedrich, who I didn’t really know the work [of] before, but got interested in during this movie. So I thought, “Well, maybe we could make a Caspar David Friedrich painting of this thing,” and it would just be a way to express exactly what I would like it to be. 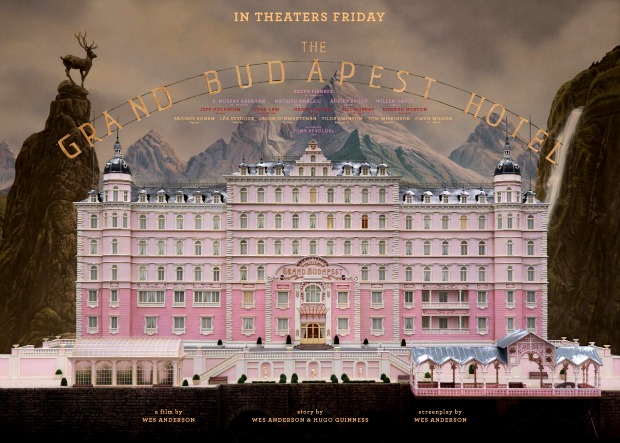 And the question is, why do I think it’s okay to do that, when probably most — almost any filmmaker–would say “I don’t think that we can get away with this,” and I’m not sure why I feel that I am going to get away with it, because we have this ski chase at the end of the movie, I want you to think it’s scary or whatever, I want it to be like a real chase, and these characters are in danger and you’re afraid of what’s going to happen to them and all that stuff.

But at the same time, the methods we’ve used to do it, you can see what the tricks are. On some level, I just do it because I like to see that stuff, and I’m sort of trusting that enough people will feel the same way, but I don’t know if that’s a very safe bet or not.