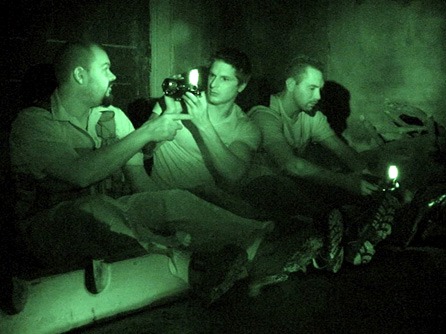 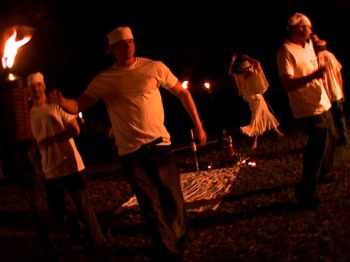 Here’s a fun video from the Travel Channel, of the “Ghost Adventures” guys employing a woman named Bloody Mary – the Voodoo Queen of Louisiana — to call forth spirits at the Magnolia Plantation in Natchitoches, Louisiana. Apparently, she’s got the magic key to the spirit world door.

When she does her ritual within a ring of flaming torches, the participants feel an electricity, and a photo snapped by the crew reveals a female face within the smoke. Later, the ghost hunters spend the night in slave quarters on the plantation and various tapping, chanting and creepy voices are picked up on the audio.

When I was a kid, I can’t tell you the number of times we worked our old Ouija board to invoke the spirits. It was hard to tell whether one of us was moving the planchette or whether the spirits were actually there. I do believe in spirits, but I doubt any came around when we played with the board. Years later, my husband was aghast at the idea of even touching the board, let alone bring it into our home. He is very suspicious of that Ouija board!

Then again, we never taunted the ghosts. Call me crazy, but is it really a good idea to demand that spirits “do some voodoo magic on us!” while you’re spending the night in ancient slave quarters? The ghosts are already ticked off that you’re disturbing them. That just seems like a bad idea, “Ghost Adventures” guys.