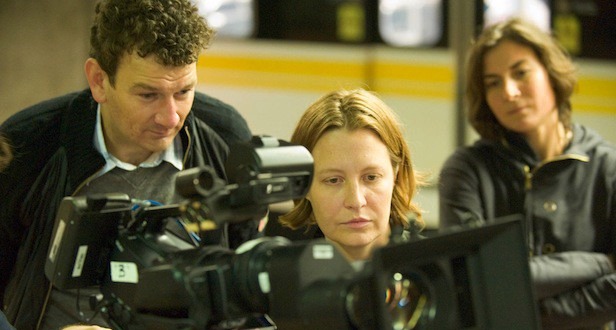 Obviously, my first question to her during our interview at SXSW this past week was, “Did you have to get George Clooney’s OK?”

“It’s actually a really amazing story,” she laughed back. Bingo. This was going to be a great interview.

McGowan was determined to get the mug of a beloved Hollywood male come hell or high water, but during prep her producing team was pretty much telling her to keep dreaming.

At some point in this process, McGowan realized that Clooney had produced “August: Osage County,” which Lewis is in, and McGowan knew she had her in … maybe.

Allegedly, Lewis came back to McGowan and told her that he’d said she didn’t even need to ask him that, and of course she could use his likeness.

“It was the big coup of the day when we got permission for that,” triumphed McGowan.

“Kelly & Cal” is the story of 90s riot girl turned suburban housewife Kelly who meets her neighbor Cal (Jonny Weston), a senior in high school who’s been crippled from an accident. The unlikely duo spark a friendship that brings them both back to life, but also teaches some necessary lessons in the doing.

Kelly is one of the more subdued roles for the always nutty and energetic Lewis that we’ve seen this past year. Her role as Aaron Paul’s ‘together’ sister in “Hellion” is the other that comes to mind. McGowan’s desires behind picking Lewis to play Kelly were because her life seemed suited to that role perfectly – wild-child turned respectable actor.

“Nobody knows who I am,” McGowan modestly admits, “so when you’re casting at my level, you don’t get to audition people. I did a lot of research and I watched everything Lewis has ever done. I had a gut instinct and I had no doubt that this was going to be a perfect role for her. I think the key is that you have to find something that [the actor] wants from you. I mean, it’s not going to be money, so it’s going to have to be something like interesting material or interesting role, and I just had a hunch that it would work for her.”

Weston, who plays Cal, a depressed teen paralyzed from the waist down, is little known except for his role in 2012’s “Chasing Mavericks.” When asked why she didn’t consider any actors that were already in a wheelchair, McGowan replied cautiously.

“We did. We discussed it. But we were trying to find someone at a certain level, acting-wise and career-wise, so what we were trying to do didn’t really fit that. I think if it were a smaller film, we would have auditioned actors that were paralyzed.”

Weston did his due diligence, though, in training to be in a wheelchair for an entire shoot. He had been filming another project while “Kelly & Cal” was prepping, so they got a wheelchair on set for him. He used it in his life, really trying to get the authenticity of what a teen’s life might be like in that scenario. They also set him up with the Kessler Foundation in New Jersey and the Shepherd Center in Atlanta, both physical therapy recovery institutes.

“They took him in and hooked him up with guys who have been paralyzed,” explained McGowan. “So he got to meet people who really had to live in that condition, and he learned all of their intricacies that helped make his performance more real. It was important for me and for him for it to be authentic, and the last thing we wanted to do was insult anyone by getting something wrong.”

It was the authenticity of the characters that originally drew McGowan to the script, which was written by USC alum (like McGowan) Amy Lowe Starbin.

“When you see something that rings very true to you,” said McGowan, “you go for it. I liked the universal themes of identity and growing up and marriage and things like that. I  really connected to it. And I loved the characters, that’s what really drew me in. Amy’s particularly good at writing dialogue. There are lots of scripts that I read as a director that I know would be amazing movies, but that I couldn’t make. When you read a script that is amazing and you connect with and you know that you can make it a better movie than anyone else can … well, that’s how I felt about that script.”