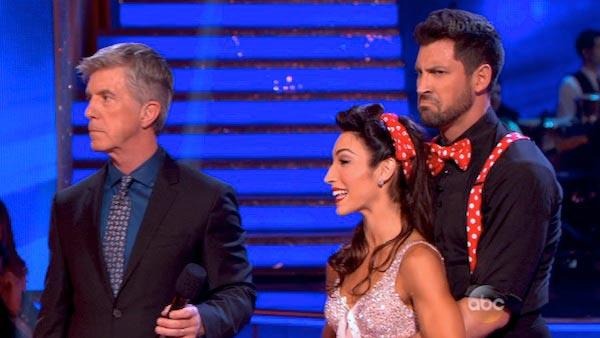 Hey Dance fans! What a night of crazy stunts–and I’m not just talking about the dancing. In their constant effort to keep us on our toes and bring in new, younger viewers, “Dancing With the Stars” introduced a few more format changes. They also decided tonight would be a double elimination, including one in the middle of the show.

I can’t help but wonder if they knew that going in and just made it seem like a last minute decision, or if there’s a change in the coming weeks’ schedule that forced them to do a double elimination in this early second week of competition.

RELATED: All “Dancing With the Stars” Recaps & News

While I don’t necessarily agree with all of their format changes, there is one I’m starting to look forward to: the switching of partners. It’s often interesting to see how people’s dancing changes with different partners. Plus, I feel a little badly that Emma Slater, who, granted, survived much longer last season than perhaps she and Bill Engvall should have, is once again paired with one of the weaker (weakest?) dancers. I really like her a lot, and would love to see her with a partner who could match her better (like, say, Charlie).

I definitely didn’t like that they announced the first elimination without allowing the couple to perform. Mid-way through the show, hosts Tom and Erin reveal that the first couple eliminated is swimmer Diana Nyad and her partner Henry Byalikov (we hardly knew ye). While Tom initially said they wouldn’t get to do their dance, he eventually let them.

I suspect that the plan was for them to dance after a brief Q&A all along, but they made it seem like an afterthought. (They should have done it the way they did the final elimination: with three couples performing and then finding out their fate.) I feel a little badly for Diana, and she wasn’t terrible. In fact, she made it into my Top 5 dances this week.

Drew and Cheryl’s Jive: I’ve always found it a little ridiculous that “jive is a Latin dance,” as Cheryl said. It’s true only in the competition ballroom sense. Jive is another form of swing dance (more on that below), and it’s purely an American dance. (The tango, on the other hand, is a Latin dance, from Argentina, but in the ballroom sense it’s one of the Standard or smooth dances.)

Anyway, Drew did a great job! I really enjoyed his fox trot last week too, though he didn’t make my Top 5 (it’s tough to pick only five). He really knows how to move, and has great bounce. And yes, he definitely is a crowd pleaser. The hardest part, especially in jive, is to keep the energy up, and he did that pretty well too.

Meryl and Maks’s Swing: Since swing is a general term enveloping many styles of dance (including jive), I was wondering which type of swing they’d do. Meryl specified wanting to do lots of leaps and throws, which put it more in the realm of Lindy Hop (except for one West Coast style sugar push they did)–and they did a fantastic job! Woo-hoo! That was really great and lots of fun.

It’s clear that as a skater, Meryl knows how to jump–and how to fall. She went for it, and got amazing height in those jumps, which were all pretty clean. And the routine wasn’t only tricks either; there was actually a decent amount of Lindy hop content. She’s also great at dancing with Maks, keeping eye contact, flirting, and playing off of him. They had good ragdoll style in the tricks too, really capturing the “Hellzapoppin’” look of Frankie Manning and Ann Johnson.

Diana and Henry’s Cha-Cha: As I mentioned above, it seemed very odd, and a little cruel, to initially deny them their dance, even though they eventually allowed them to do it. I’m a little sad that Diana is leaving already. She barely had a chance to show what she can do, and she has a really wonderful attitude and approach to the dancing and the competition. She’s not terrible either (certainly better than Billy Dee, but I’m afraid that’s not saying much) and was definitely having lots of fun. She just needs to give it a little more. She’s also a great performer, especially for someone who’s not actually a performer.

James and Peta’s Salsa: Fortunately, I think they toned down the potential romance of the situation; Peta (who, as I’ve mentioned several times last season, is not my favorite), is always paired with the young, hot, inexperienced-but-not-bad guy, and they always play up the flirting. Ick. It’s definitely still there this week, but not as obvious. Their salsa was surprisingly good, with strong partnering, especially that fantastic “rotating tire” lift at the end. There was a moment when they were off the beat, but they recovered fairly quickly. They certainly had lots of fun.

Cody and Witney’s Tango: I was not terribly impressed with Cody last week and he’s not my favorite, but I did enjoy his tango this week. I have to confess, I do feel old though, because I don’t understand why he prefers to wear those poopy pants (even his costume incorporated that style). For a performer, he surprisingly needs to think about his facial expressions a little more, but the choreography was cool and executed well (not to mention those wicked lights in the costumes), and I loved the moonwalk. Of course, I always have to ignore the fact that tango music is rarely actually tango music on this show. Incidentally, I’d be very curious to see him do contemporary, to see if he can soften up those angles a bit.

The second elimination of the night was not terribly surprising: New York Ranger Sean and his partner Karina were let go. He’s kind of an odd presence, and seemed uncomfortable on screen, but both weeks his dancing was quite a pleasant surprise. He actually moves pretty well and clearly works hard enough to clean things up. A small part of me is sad that we won’t get to see him improve.

So what about you, dance fans? Who were your favorites tonight? What do you think of the various format changes? How about that double elimination? Do you have any brilliant ideas for partner switches, and why?