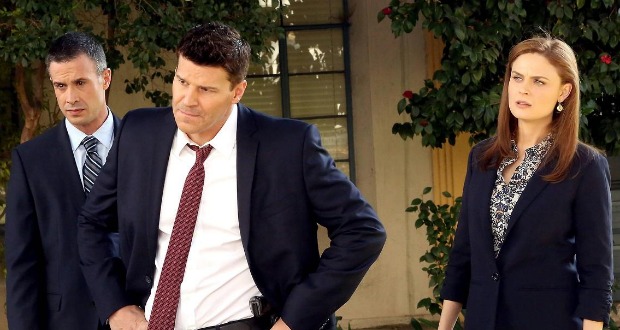 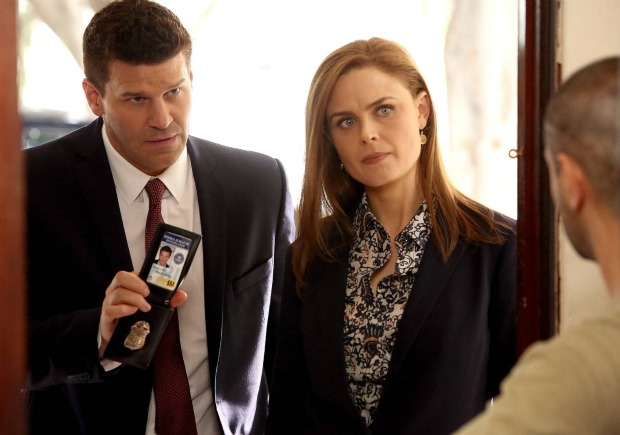 Finally, “Bones” is back – and it’s back on Monday nights! After being renewed for a 10th season, I think they realized it’s best to go back to Monday – and I’m glad.

“The Source in the Sludge” was a more intense episode of “Bones,” dealing with a terrorist linked to Al-Qaeda. CIA agent Danny Beck (Freddie Prince, Jr.) was back to help Booth and Brennan hunt down the killer of a young Afghan woman.

But first, at the dinner, Brennan was aggravated that the insurance company wanted to charge more for her life insurance policy than Booth’s. Funny how Booth knew he wasn’t going to win the conversation, but did try and tell her that he’s trained for the dangerous field work they do together. She insisted that her skills were just as good and she should definitely outlive him.

I loved when he brought up the point that she shot him during a previous case (“Mummy in the Maze” one of my favorite episodes), although she said it was a ricochet … and it was. LOL. Later she ends up agreeing with the analysis of the insurance company. At least she can admit when she’s wrong!

Sari Nazeri was found in a bag left in a lake. Booth and Brennan go to question Sari’s brother Aziz, only to find Danny there. Booth, of course, was not too happy. He immediately wondered why Danny was there and what his link was to Sari and Aziz. When asked who would want to kill her, Aziz says he is certain it was Ibrahim Sojadi, an Afghan terrorist. The CIA had recruited her to help locate him, and she put a drone transponder in his house. Ibrahim found out and was out to get revenge. Danny was holding back as much information as possible. I loved when Bones told him that the FBI had jurisdiction over the CIA – way to defend your man!

Daisy was back  and acting very un-Daisy like in the lab. She missed several things while going over the remains. Brennan caught what Daisy missed and wondered if she would keep her or not. Then we find out that she failed her orals and felt like a failure.

Lance — I still want them back together — assured Daisy that it wasn’t a big deal and that she needed to tell Brennan about it. Although afraid to, she did, and Brennan understood. To my surprise, Brennan failed her orals too and said it was just an ego booster for the professors, and she told them so. Couldn’t you just see that?! She just didn’t want Daisy to let it affect her work in the lab. After that, of course Daisy was spot on, discovering a small but important knife wound in Sari’s bone. 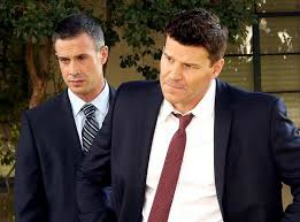 Later, Beck shows Booth footage of the drone strike on Ibrahim’s home. Booth doesn’t buy that Ibrahim died in the strike — he knows how terrorists work. Danny was very adamant that Sari saw Ibrahim go into the house. Booth starts to wonder why. He didn’t trust his old friend during most of the episode.

Cam discovers that Sari was violently dragged (but they still didn’t know what killed her), while Angela finds out that Ibrahim was in U.S. custody in Afghanistan and a guard named Derek Johannessen was on duty at the prison. Ibrahim escaped with some other inmates when the prison was bombed … hum.

Booth and Danny decide to question Aziz again, and Bones demands to go. Good thing because when he tried to flee, she decked him. She’s still got it!

Good news at the lab. They found DNA from a bite that Sari gave to her killer while fighting to live. The DNA was a match to Johannessen.

Turns out Danny was in love with Sari (although Booth was very upset that Danny wasn’t truthful to begin with – he would have lost his job). The bad news is that Johannessen was paid off by Ibrahim’s terrorist network. He was paid to kill Sari and spread chatter that Ibrahim was still alive and well. The real bad news was that the U.S Government made a deal with dirty Derek to give up names and information on the terrorists, and he would be set free with $10 million in his pocket! No way!

Of course NO WAY, not with Booth around. He and Danny confront Derek and tell them they know his rehab from the prison bombing was still being paid for by the military, which meant he was still part of the military and could be tried in military court for treason and murder. See ya! 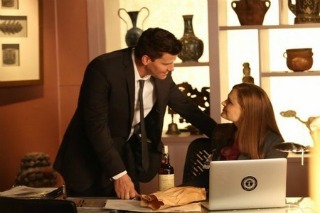 Last scene: Booth and Bones, of course. Booth brings her a bottle of 30-year-old scotch to celebrate the end of the case with his “partner,” not his “wife.” She liked that. So cute when they sat on her sofa and he wanted her to tell him a story. She laughed and said, “A scotch story?”

Sari was a wonderful young Afghan woman, and the showrunners/writers of “Bones” let it be known that there are so many things these women can do, but that they are still very oppressed in the Middle East.

They want to learn, discover, be political, be business women — everything that western women are “allowed” to do. Amen.