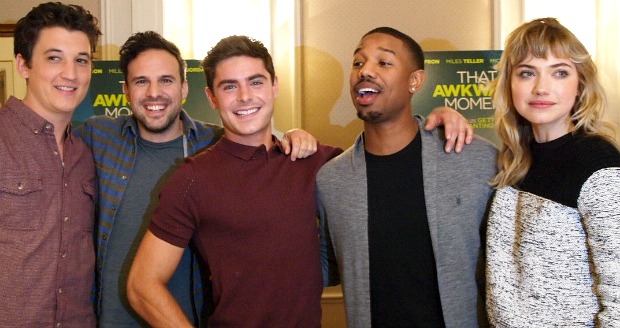 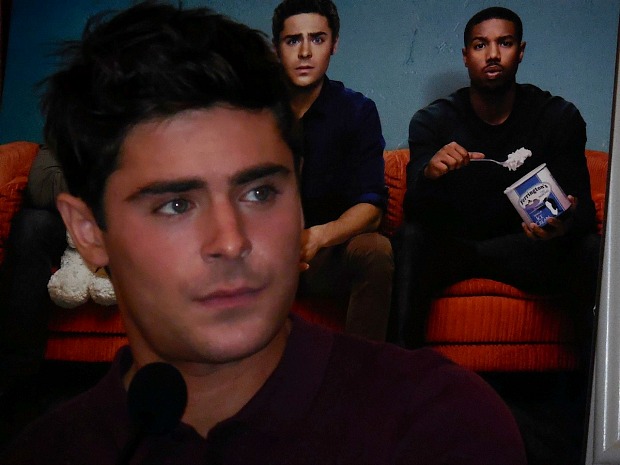 After a rough year – the actor did a stint in rehab and also broke his jaw after a fall – Zac Efron has a lot riding on “That Awkward Moment,” which he also executive produced.

“That Awkward Moment” opened Friday and made $3.9 million at the box office, with a weekend gross of $9 million, according to Box Office Mojo. The movie cost $8 million to make, so it should still turn a nice profit.  “Ride Along,” starring Ice Cube and Kevin Hart pulled ahead and earned $4 million at the box office Friday and $93 million since it opened three weeks ago. “Frozen”is the big winner; it made $9.3 million this weekend for cumulative earnings of $360 million since it opened 11 weeks ago.

As a hands-on producer, the “High School Musical” star was instrumental in casting Miles Teller and Michael B. Jordan, two of the hottest actors around, to play his romance-challenged pals.

Miles Teller scored a huge success in “The Spectacular Now,” co-starring Shailene Woodley, with whom he just completed the potential blockbuster, “Divergent.” He also stars in this year’s Sundance hit, “Whiplash,” in which he portrays a driven jazz drumming student, from first-time director Damien Chazelle. This should figure heavily in next year’s awards chatter.

Michael J. Jordan, who has received critical acclaim for his breakout role in Ryan Coogler’s”Fruitvale Station,” has several films in the pipeline, including as a potential action hero in the next installment of “The Fantastic Four.” He is also working on “Creed,” which will be written and directed by Coogler and will co-star Sylvester Stallone.

The trio of handsome and talented guys, along with British actress Imogen Poots (soon to be seen in “Need for Speed” and Peter Bogdanovich’s directorial comeback, “Squirrels to the “Nuts”) and “That Awkward Moment” director-writer Tom Gormican, participated in a press conference recently at the Waldorf Astoria in midtown Manhattan.

Below are highlights from the press event (click here to read Part 1 of our report).

Click on the images for larger views and sharing options. All images by Paula Schwartz.

Efron on how guys can relate to the film:

We wanted a careful balance between being good guys deep down and caring and sort of waking up the next day and feeling sort of guilty for our commitment issues, but at the same time we have to live our lives. This is the first look, really, into what, I think, (it’s) like to be a guy dating at our age, and what it’s like to be out there, and sometimes it takes your best friends to get (you) through it.

Tom Gormican on why he wanted to make a romantic comedy:

I wanted to see if I could see a revitalization of the romantic comedy genre. It’s one of my favorites, and I think it’s gotten to (have) a pejorative (label)… I also wanted to put a different spin on it and have the movie take place from a guy’s perspective, because I felt like that’s something we haven’t seen before, and to create a sort of unpredictable movie from the guys perspective. I think girls want to see that peek behind the curtain and, for guys, my hope is that they would actually see something from their own lives and their relationships in it.

The guys get naked a lot in the film. Is there anything they wouldn’t do onscreen?

Efron: If there’s a specific reason for it, if it’s authentic and helps the story and is necessary, than absolutely. There’s nothing I wouldn’t try.

The director on casting “That Awkward Moment”:

These three guys, I chased them down, chased them down, until I was able to get them to say yes. I think one of the things that’s important in a movie with guys in their 20’s making, often time, terrible decisions … there are things that you may not like about them, so they need to be incredibly likable as people. Not just as actors that embody roles, they had to be people that you would see and actually be friends with in real life. And I think it became just that during the movie … they actually became very close friends and that sort of thing shows up on screen. So that was sort of my process in figuring out who we could put together. I think we did the best job possible of finding guys who work for these roles.

Poots on her role as Efron’s character’s love interest:

What was so cool about it was I felt really part of something. With all due respect to Tom, you had constructed this world and it felt so relevant … This is a film that happened right now, and it felt really refreshing to be part of it with these three guys.

What I felt was so cool about Ellie (her character) and what came through in Tom’s writing, was he created a character that was never responsive purely to the guys. I think the thing I found so intriguing was she never attempted to conform to anything. She never initially tried to be part of his friends. It actually took them coming around to her to make it all gel together so great. That’s what I found exciting about it, because the concept of this movie could have sounded very one sided, and actually, I didn’t find it that way at all.

Efron on how he’s doing in his life now after a rough year:

I’m so happy. I feel like I’m in a great place, and I’m glad that I’m here to share this moment with everybody and be present for all of it, because it was an interesting year. I learned so many things, so much, but the best part of it was being able to reflect upon this experience and realize how much I had learned about myself and the kind of man I want to be. This movie, these guys, coming back to it, coming to New York and just being here in this moment … It exemplifies what it’s all about. I’m so happy to be here. I couldn’t be happier. I’m in a great place.