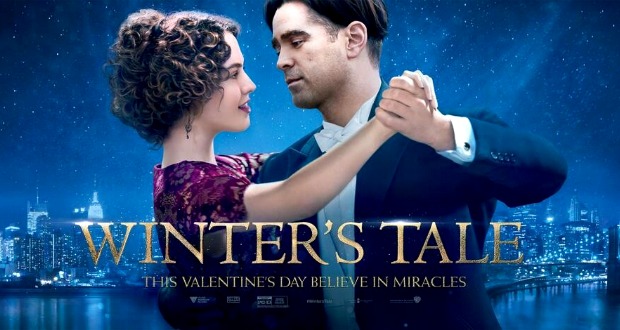 Last Sunday at the Crosby Hotel in Manhattan, Farrell, Findlay and Goldsman, along with fellow cast members Jennifer Connelly and veteran actress Eva Marie Saint (“On the Waterfront”), participated in a press conference to promote the film.

“Winter’s Tale” is swimming in swoony love scenes between the two young lovers, but at the junket there was some major flirting going on between 37-year-old Farrell and 89-year-old Eva Marie Saint, who in the film plays a character almost two decades older than she actually is.

The supernatural fantasy romance-thriller deals with grand emotions and big issues of love and loss. There’s also an amazing white flying horse that rescues Farrell’s character from villains in a black car racing over ice. (Will Smith plays Lucifer and Russell Crowe the devil’s disciple.)

The story moves back and forth between centuries. Farrell was asked what all the time travel was like.

“It was tiring,” Farrell sighed.

How did he remember what century he was in?

“If I was wearing the wig, I was in contemporary times,” he cracked, adding that everything was carefully marked out in the film. Farrell’s coif is a wonder, shaved on the sides and artfully arranged long on top, so that it flaps in the wind. In the scenes set in modern times, the hair is long and wild.

What did they enjoy most about making the film?

The “On the Waterfront” actress, cracked, “I enjoyed Colin Farrell the most.”

“I was partial to Eva Marie Saint as well,” Farrell cooed.

Then, because it’s saturated in romance, the cast and director were asked if notions of love were perhaps overrated?

“Overrated?” Farrell asked, “No, possibly underrated the importance of it and how its prevalence in a single person’s life and the life of a shared community can make incredible changes and can promote the idea of peace and harmony within a society or within a person’s individual existence.”

Goldsman started singing the Beatles’ song, “All You Need is Love.”

“It has to be the one thing it seems that defines us as human beings,” Farrell added, “our ability to care for each other, our ability to demonstrate through acts of compassion a concern for your fellow man. Valentine’s Day? I don’t even know what that’s about. Really? It’s whatever you make it. Some people put up a Christmas tree and some people don’t.”

Farrell added, “I don’t think there’s anything wrong with flowers and chocolate-covered maraschino cherries. Would it be nice if it didn’t take such a publicly promoted or commercially promoted holiday for people to extend themselves with gestures of love? But yeah, I know. I think love is really what makes it all spin, you know?”

“What do you know about love?” Farrell cracked. “Next!”

Eva Marie Saint, married to veteran director-producer Jeffrey Hayden, with whom she had two children, laughed. “If I don’t know about love by now I never well. And that’s kept me really going in my life. I don’t know how I would have gotten through this life without someone to really love me. Love is very forgiving to one another, and it’s my favorite emotion in life.”

Then Eva Marie Saint, who looks terrific and is still a hoot, gushed about the love scenes in the film, which includes some tasteful nudity that she noted, “left something to the imagination.”

“I’ll never forget your face,” she told Findlay, “with the kiss and Colin, and I wanted to be there,” she paused, “in your place.”

Findlay was asked, what was it like filming the sex scene with Farrell?

The actress stumbled a little of the question and reddened, noting, “It was fine, a peaceful moment. I suppose they’re kind of aware of finding the comedy within something and the naïvete and the joy of it, a very special moment,” where their characters have “found real, true love.”

Then Goldsman jumped in to help her out. “Let me disabuse you of something,” he said, “Love scenes are the most horrible thing you can ever ask actors to do. Just try to take a moment, now take off your clothes. But here, really? No, no, really! So love scenes are the hardest thing in the world, and if you enjoy them that’s wonderful because nobody making them sits there and goes, let’s do that again tomorrow.” The director pounded his fist lightly on the table to emphasize the point.

“I don’t know that I agree,” Farrell chimed in. “I really don’t. Maybe that’s awfully sleazy and cheap of me. It’s not that I get personal kicks or gratification from them, but I do think that human touch in whatever form it comes in, as long as that form is one that is mutually compassionate and respectful, is a really gorgeous thing. So while it is an atmosphere of absolute artifice and it’s not romantic and it’s never going to be sexy, if the two people who are involved in it are on the same page and taking care of each other, there’s worse days at the office.”