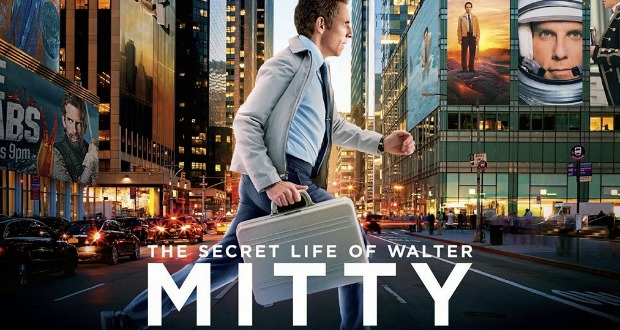 “The Secret Life of Walter Mitty”: The New Version – The Classic Movie – The Source

That is because I love the subtle, intellectual, spare humor of the great American humorist James Thurber. James Thurber wrote “The Secret Life of Walter Mitty” for the New Yorker in March, 1939. You can read the original short piece here.

Even among people who never saw a copy of the New Yorker, Thurber’s story made “Walter Mitty” a household name,  and a recognizable synonym for hopeless, hapless dreamers, so naturally, movie makers had to “update” Walter Mitty in movie form. That is so wrong in so many ways. Here are three reasons why:

1. Most importantly, if you followed the link  and read the original (it’s only three computer pages long — eight pages in my small paperback copy of “My World and Welcome To It”), you will agree that it could have been written yesterday instead of more than 70 years ago. Timeless. Something the movies miss.

2. While I realize that movies and printed works are entirely different animals, and one cannot expect a movie to duplicate a book, surely there are some printed works that belong on the printed page and don’t belong in movies. Language is important to Thurber. He was careful how he chose and arranged words.  Making a visual statement loses all sense of the language of Thurber.

3. The Danny Kaye movie is fundamentally a romantic adventure comedy giving Kaye an opportunity to get in all his schticks, including a patter song, for heavens sake. His talent really shines in playing the multiple roles of the various imagined adventures — a couple of which actually are taken from the original story.

The new Ben Stiller movie is gussied up with special effects, and his adventures sometimes happen in reality instead of just in his head. I will give the new movie credit for setting the movie in the offices of Life magazine, a choice packed with interesting metaphor.

You can read Life’s comment about the prominently displayed magazine covers here. As with the Danny Kaye movie, the Stiller script is built to showcase the star instead of ideas. The theme shifts away from Thurber’s  sardonic point of view to an uplifting “dare and you will succeed” kind of message.

In the original “The Secret Life of Walter Mitty,” Thurber presented one of his archetypical weak husbands with a domineering wife. Kaye’s movie substitutes a domineering mother for the domineering wife, but when Kaye kisses her on the mouth, one begins to wonder if he really should see a shrink. The glamorous Virginia Mayo heats up both his real life and dream life.

Stiller seems to borrow more from the Kaye movie than from the Thurber story — his Mitty works in publishing as Kaye’s did, and he is single and looking for romance in real life — not just in his dreams.

When Mitty’s  wife (in the original) questions why he didn’t follow her instructions, he says, “Things close in.”  And when he forgets what he is supposed to purchase, he replies to her nagging, “I was thinking … does it ever occur to you that I am sometimes thinking?”

In fact he is always thinking. His mind is his escape from an unsatisfactory life that will continue. No romance will rescue him, no deus ex machina of Hollywood magic will turn him into a real life hero. But he can always escape his humdrum life by retreating into his daydreams when things close in.

I understand borrowing ideas from other media. What I don’t understand is stealing a name from a character and then distorting it so that it bears no resemblance to its namesake. It is like updating Hamlet by turning him into a motivational speaker who says things like “Believe in yourself and all things are possible.”

The truth about Walter Mitty is captured best in Stephen Marche’s Esquire article, The Real Secret Life of Walter Mitty, in which he writes, “but the fact is, no film can capture the beautiful truth at the heart of Thurber’s best story.”

Just in case you did not yet take advantage of the link up there at the top to read the original version, I’ll leave you with the ending of Thurber’s “Walter Mitty.” You can see for yourself the contrast between the subtlety of Thurber’s insights that bring a gentle smile and the onslaught of moviedom’s frenetic Danny Kaye or Ben Stiller.

He is waiting outside a drugstore for his wife.

Walter Mitty lighted a cigarette. It began to rain, rain with sleet in it. He stood up against the wall of the drugstore, smoking…He put his shoulders and his heels together. “To hell with the handkerchief,” said Walter Mitty scornfully. He took one last drag on his cigarette and snapped it away. Then, with a faint, fleeting smile playing about his lips, he faced his firing squad; erect and motionless, proud and disdainful, Walter Mitty the Undefeated, inscrutable to the last.