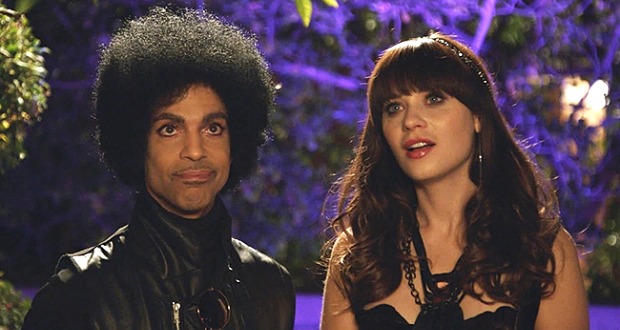 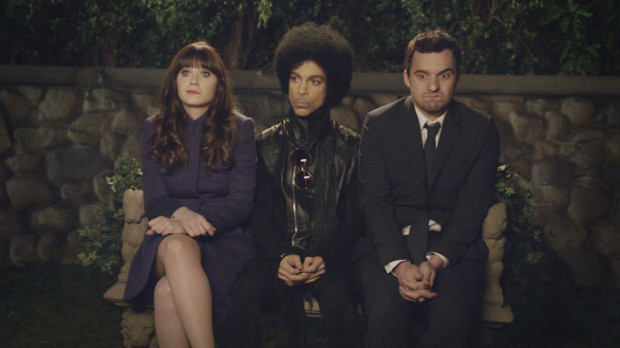 The show landed the coveted post-Super Bowl spot, and I had hoped they would have a hysterical episode, as many of their eps have been in the past two seasons. But this episode was equal to most of the episodes this season – not really funny, kind of just meh. Even adding a cameo from ace pitcher Clayton Kershaw of the Los Angeles Dodgers did not even help it (and I’m a huge Dodger fan). Prince even had a big role in this episode, and it’s the most I’ve heard Prince speak in maybe a decade or so.

Ceci and Jess find themselves invited to Prince’s house for a party after they almost get run over by his assistant. The assistant even sends a limo to pick them up. (Does the assistant really have that much authority?) As the two get in their limo, Nick wishes them well and tells Jess, without thinking, that he loves her. A shocked Jess doesn’t know how to respond and ends up giving him a two-gun finger salute.

Nick, not knowing what to do, decides he needs to take it back, so the four guys make their way to Prince’s house. First of all, how do they know where Prince lives? Secondly, there was the blatant product placement for the Ford Fusion in the midst of their conversation. So unnatural and out of place.

Nick and Jess find each other, but she still can’t say, “I love you” to Nick. Luckily, Prince isn’t partying with all 500 guests at his house, he’s just roaming his property alone and happens upon the two. Taking Jess under his wing, he spends most of the night with her as her pseudo-psychologist, getting her to open up to her own feelings, dressing her in his own wardrobe, force-feeding her eat pancakes. It was a bizarre interaction between the two, which led up to the anti-climatic moment when Jess declares her love for Nick.

Are the writers running out of Jess and Nick moments that they had to resort to them declaring their love for each other already? I feel like the Nick/Jess relationship has been rushed once the two got together at the end of Season 2.

I felt like an episode of “New Girl” in the coveted post-Super Bowl spot would have been best served with a one-off storyline instead of continuing on with the Jess/Nick relationship. For viewers who have never watched the show, I imagine they were a little lost on various backstories, and the funny just wasn’t there in this episode. Though, in keeping with the flashback to the 80s theme of most of the Super Bowl ads, it seems appropriate our roommates decided to party like it’s 1999.

For shippers, it looks like Ceci is starting to fall for Schmidt again. Get those two back together pronto so we can have some awkward attempts at romance from Schmidt that turn into “awwww” moments. Writers still need to figure out what to do with Coach and Winston – they are both getting lost, neither having a distinct voice.

Hopefully, if the show gets a fourth season, they will be able to have upswing versus this entire season, which has been on a downswing.

What did you think of this episode of “New Girl”?