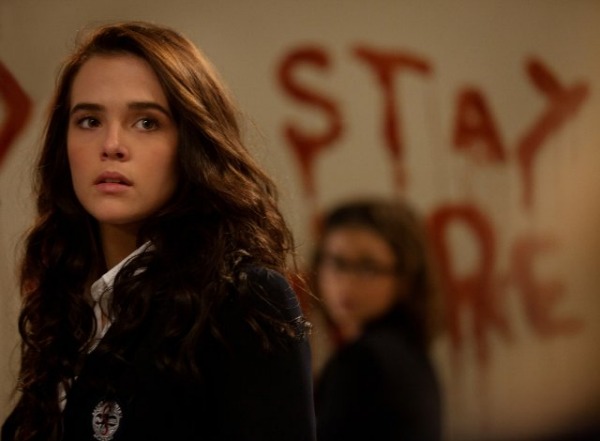 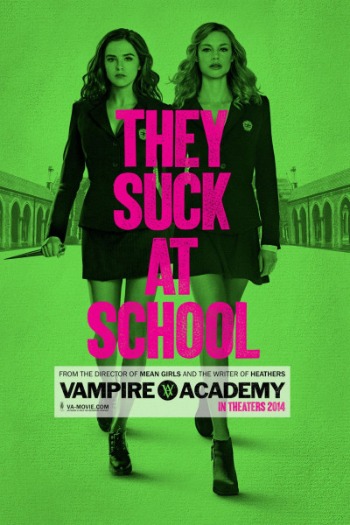 EDITORS: Buy this review in Reel Life With Jane’s Shop.

SYNOPSIS: Rose Hathaway is a half human/vampire, a race known as Dhampir. Her legacy is to protect the Moroi — peaceful, mortal vampires living secretly within our world, including her best friend Lissa – from the bloodthirsty, immortal vampires known as the Strigoi.

REVIEW: I haven’t read the books by Richelle Mead on which this movie is based, but I can only guess that they brightly outshine the movie. The concept is good and one we’ve seen before in vampire-centric franchises like “Twilight” and “The Vampire Diaries,” but the execution is lacking in just about every way. I do love the strong female characters — they’re very “Buffy”-like — but the script and story is lazy.

Zoey Deutch plays Rose Hathaway, a Dhampir (half human, half vampire) whose job is to serve as a guardian for the pureblood vampires, known as the Moroi. Rose is bonded to a Moroi princess named Lissa (Lucy Fry), and the movie opens with the two on the run. For mysterious reasons, they’ve run away from their school, nicknamed the Vampire Academy, but are found and forced to return.

Rose says they’re safer on the outside, and sure enough, once back at school, they face a series of strange occurrences, such as warnings written in blood and dead animals left as omens. Is it the work of a race of evil vampires known as the Strigoi, or could it be something even more sinister?

Along with the supernatural issues, Rose and Lissa must deal with ordinary high school stuff, like crushes, bullies, and an upcoming dance.

Because this movie is based on a series of popular books and is helmed by the Waters brothers — screenwriter Daniel (“Heathers”) and director Mark (“Mean Girls”) — I expected more. I feel like they’re trying to capitalize on the aforementioned vampire franchises, but it comes off as something more like a Disney channel show (well, a darker, bloodier Disney channel show). There’s not a lot of substance here, and what little visual effects they use are cheesy.

There’s also a lot of backstory to cover, so lots of floating words to help the characters describe what’s going on and who’s evil and who’s not. And even though veteran actors such as Joely Richardson and Gabriel Byrne do their best with the material, they don’t have a lot to work with.

A bright spot is Zoey Deutch, who’s not only cute and likeable, but she delivers funny lines in a funny way, is dedicated to protecting her best friend, and also has some killer fighting movies a la Sarah Michelle Gellar in “Buffy the Vampire Slayer.”

As for the take-away, there’s a scene at the end with an impassioned speech about sticking by your friends and not giving in to bullying.

Sex/Nudity: Teens kiss in several scenes, and sex is discussed often. The main character’s cleavage is often prominently displayed. In one scene, a love spell causes her and an older man (her teacher!) to kiss, strip to their underwear, and fall into bed together. The man then breaks the spell, but it’s clear they’re attracted to each other.

Violence/Gore: Lots of martial arts fighting against monsters (who are often stabbed with silver stakes), and lots of blood, though not what I’d call gory. Two “warnings” are written in blood, and vampires are shown sucking blood from humans in a few scenes. Humans are shown volunteering to be “vampire food.” The aftermath of a car crash is shown, including bloodied bodies. The bloody corpses of a fox and a cat are shown. A character is briefly tortured using magic and shown with cuts on her arms.

Which Kids Will Like It? Kids 13 and older who like vampire movies or who’ve read the books by Richelle Mead.

Will Parents Like It? “Vampire Academy” isn’t one of those movies that adults will like as well as the target demo of teenagers. I do want to read the books now, though, because I’ve heard good things about them.