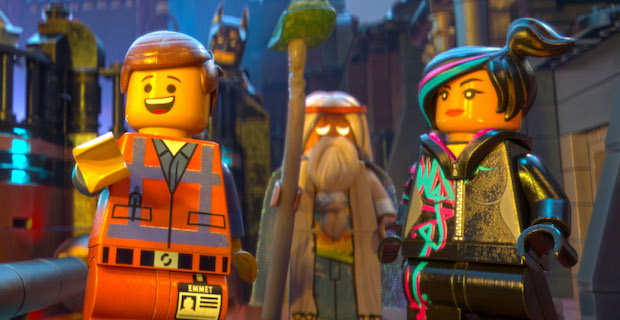 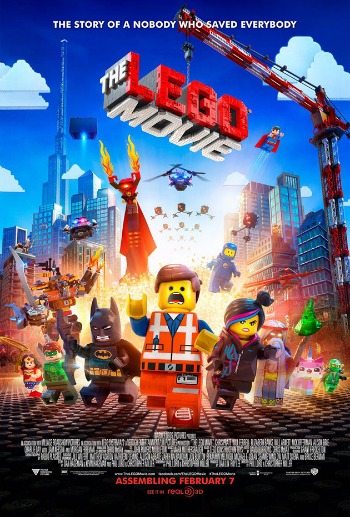 EDITORS: Buy this review in Reel Life With Jane’s Shop.

SYNOPSIS: Emmet is an ordinary LEGO figure who’s mistakenly thought to be the extraordinary MasterBuilder and recruited to join a quest to stop an evil LEGO tyrant from gluing the universe together.

REVIEW: Who knew a movie about LEGOs called “The LEGO Movie” could be so entertaining?! Seriously, I thought this was going to be one of those movies I had to suffer through, but it’s really cute, funny, sly and creative.

The movie opens with what ends up being the backstory for the film — an epic battle between evil Lord Business (Will Ferrell) and noble Master Builder Lord Vitruvius (Morgan Freeman). Lord Business plans to dominate the entire LEGO universe with a deadly weapon called the Kragle, but Vitruvius has a vision that someone with a yellow face known as “The Special” will defeat the villainous Lord Business with the missing “piece of resistance.”

Jump ahead several years, and an ordinary construction worker named Emmet (Chris Pratt) spies a suspicious figure (Wyldstyle, voiced by Elizabeth Banks) on the construction site where he’s working. He follows her and ends up finding the legendary red piece of resistance.

Wyldstyle believes Emmet to be “The Special” and takes him to Vitruvius, but they soon realize Emmet is more of a laid-back follower than a visionary Master Builder. As Business and his cronies, led by the ruthless Good Cop/Bad Cop (Liam Neeson), attempt to steal the piece of resistance, Emmet must figure out if he has what it takes to save the LEGO world.

Again, I’m super excited that this movie turned out to be way better than I expected. I mean, movies based on toys usually aren’t that great. They’re made to sell the toys, and while I’m sure this movie will invigorate the LEGO industry, it’s also funny, smartly-written and very colorful to watch on the big screen.

The voice cast is perfect, partly because the actors are well suited to their LEGO characters. Adorable Chris Pratt is well known to fans of “Parks and Recreation.” Elizabeth Banks is becoming the voice of Girl Power, and you’d swear that Will Arnett is actually Michael Keaton in the movie where he played Batman. Morgan Freeman, Liam Neeson, and Will Ferrell are all veteran voice actors capable of anything thrown their way.

“The LEGO Movie” includes brilliant cameos, laugh-out-loud one-liners, and a live-action interlude towards the end that’s amazingly touching. Both kids and adults will love this movie, and it might even help the adults to forget the unpleasantness of stepping on all those LEGO bricks through the years.

Sex/Nudity: Emmet has a crush on Wyldstyle, who is dating Batman. Some intense gazes are followed by hand-holding.

Violence/Gore: Lots of LEGO action and peril, including gunfire and explosions, but all are depicted with LEGO pieces. LEGO characters are beheaded, “erased” with nail-polish remover, super-glued in place, kidnapped and “tortured” (their minds are probed for building instructions).

Drugs/Alcohol: None (unless you count “overpriced coffee”).

Which Kids Will Like It? Kids 6 and older who like LEGO toys or cute family movies with lots of colorful action.

Will Parents Like It? “The LEGO Movie” is fun for both kids and adults (Really! I’m not kidding!).