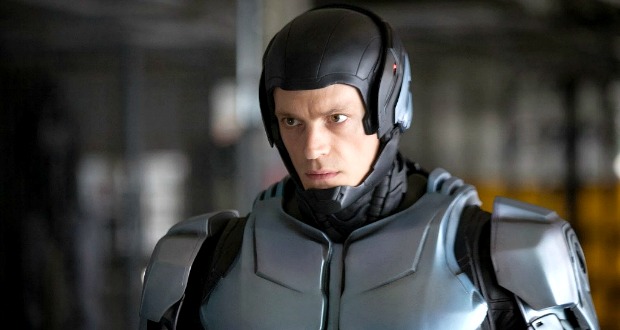 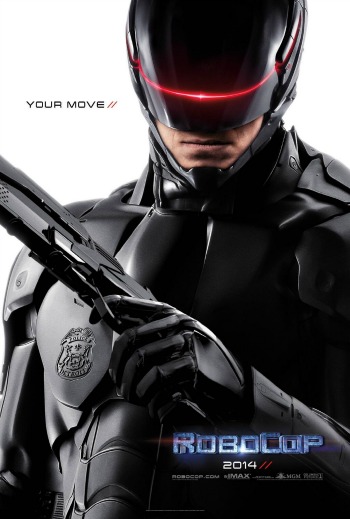 Editors: Buy this review and accompanying photo gallery in our Reel Life With Jane Shop.

SYNOPSIS: In 2028 Detroit, when Alex Murphy (Joel Kinnaman) – a loving husband, father and good cop – is critically injured in the line of duty, the multinational conglomerate OmniCorp sees their chance for a part-man, part-robot police officer.

REVIEW: First of all, I’m all for any movie that takes place in or around Detroit — about 250 miles south of where I live in Traverse City, Michigan. That city can’t catch a break lately, and while, ok, the movie was actually filmed in Ontario, Canada, at least it celebrates the Motor City. Hey, maybe it will surge ahead in the next 14 years and be a thriving city like the one we see in this movie, which takes place in 2028.

Like the original “RoboCop” (which I loved), this one tells of OmniCorp, a mega-company that’s trying to sell its line of law-enforcement robots. They’re already in place overseas, but cannot be implemented in the U.S. due to some pesky laws. Yeah, there might be a reason for those laws, like robots who go crazy and start apprehending and shooting innocent people. I can see how that might be nerve-wracking for people just minding their own business.

Meanwhile, family man and dedicated cop Alex Murphy (Joel Kinnaman, “The Killing”) begins an investigation that leads to corruption, and he ends up smack in the middle of a deadly explosion. An OmniCorp doctor (Gary Oldman) is tasked with piecing Murphy back together, and the good cop ends up half-human, half-cyborg.

As the doctor works out the cyborg’s emotional bugs, it becomes clear that the OmniCorp CEO (Michael Keaton) is using the heroic RoboCop to stir up public support for the new robot cop bill. Can Murphy/Robocop stop the bad guys in their tracks, while also solving his own murder? He’s still alive, but let’s face it, he’ll never have a normal human life again.

Does this new version live up to Paul Verhoeven’s original 1987 “RoboCop” starring Peter Weller as Murphy? No, it doesn’t. But that doesn’t mean it’s a bad movie. It probably won’t earn the iconic status of the original, but this movie is solid entertainment with strong visual effects and a great cast. Have I mentioned that I have a major crush on Joel Kinnaman? I do, and can’t wait to see what they do with a fourth season of “The Killing” on Netflix.

“RoboCop” is fairly violent, with guns blazing at every turn, but the emphasis here is on the politics of cyborg cops rather than the original movie’s humorous satire. There’s no doubt, however, that this movie is better than original’s two sequels. Does anyone even remember those?

“RoboCop” poses three questions: How human is human? Where do we draw the line? And how much freedom should we give up in the name of safety? With people allegedly listening in on our phone calls and watching us via surveillance cameras and drones, these questions will no doubt become bigger in the coming years.

But aside from all that, “RoboCop” is fun sci-fi fare, and we even get to hear him utter that iconic line, “Thank you for your cooperation.”

Sex/Nudity: A married couple kiss passionately and are shown dancing in flashbacks. He removes her top and she’s shown wearing a black bra as they fall into bed (they’re interrupted before things go any further).

Violence/Gore: Lots of violence, including guns, shooting, weapons, bullets, and dead bodies galore. We don’t see a lot of blood, which is why it snuck in under a PG-13 rating, except for a spray of blood after a character is shot and a pool of blood under his corpse. A robot shoots a teen boy who’s determined to be “a threat” because he’s holding a knife. The main character is caught in an explosion, which ravages his body. One scene shows his organs inside the RoboCop armor (only a portion of his upper body remains after the explosion), as well as somewhat graphic operation footage.

Drugs/Alcohol: RoboCop catches some young guys doing a drug deal. His “scan” indicates that one of them is “totally stoned.” RoboCop investigates a drug lab, where workers are making illegal drugs (the hero arrives and shuts it down). In an early scene, Murphy is shown having a beer at home after work.

Will Parents Like It? For a remake of an iconic sci-fi movie, it’s not bad. Especially if you have a big fat crush on Joel Kinnaman, which I do.