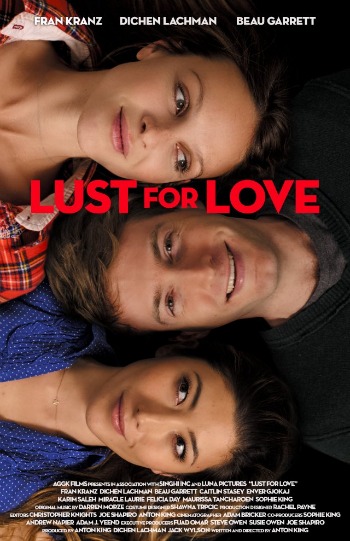 After the screening, there will be a Q&A, followed with cocktails and the film’s stars, Fran Kranz, Dichen Lachman, Beau Garrett, Enver Gjokaj and Miracle Laurie. Click here for tickets.

“Lust for Love” was written and directed by Anton King, previously a member of the Australian whitewater canoe slalom team bitten by the film bug who now makes West Hollywood his home. Originally, “Lust” premiered on the festival circuit as a short. To turn it into a feature, Anton raised the bulk of the $100k budget through Kickstarter.

He said, “We shot it for about that amount, but it definitely ended up costing more in post-production and delivery. We also benefited from many volunteer contributions from our steadicam operator, some musicians, and others who supported the production.”

You’ll see that Anton is a master of making the most of a small budget. “Lust” is shot in and around L.A. which never gets boring. Except for a few funny scenes — one a birding scene and the other the West Hollywood Halloween Costume Carnival, which were both shot in a few hours — it took 19 days to shoot.

Most of the cast are “Dollhouse” alumni. Fran Kranz plays Astor, a sensitive nice guy who is still in love with his lifelong crush. The crush, Mila, played by Beau Jesse Garrett (the one non-Dollhouser), is over Astor and moving on. He then asks Mila’s ex-best friend Cali, played by Dichen Lachman, to teach him how to woo women. Needless to say, Astor is not that guy, but he and Cali do have chemistry, and a fun easy relationship is born.

“Lust” brings to mind all those men and women who decide to blow off the nice person standing right in front of them for the loser. And on the other end, those nice people continue to crave that convert to loserdom as if they’re the last bottle of water on the planet. All they have to do is open their eyes and look for someone who actually deserves their attention. But hey what’s the fun in that?

If you don’t make it to the premiere tonight, starting Feb 7, “Lust” will be available online in the U.S. and Canada on iTunes, Amazon, YouTube, Google Play, VUDU, Xbox, PlayStation, and widely available on cable On Demand, including Comcast, DirecTV and Time Warner Cable. Just in time for Valentine’s Day.