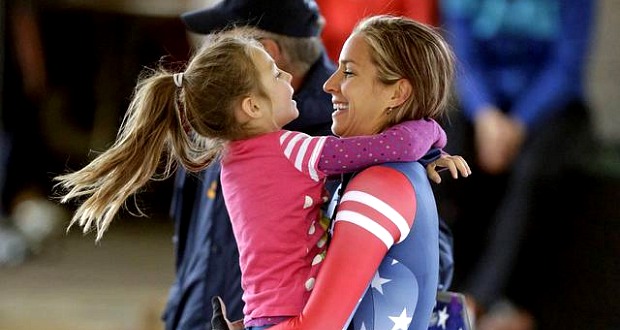 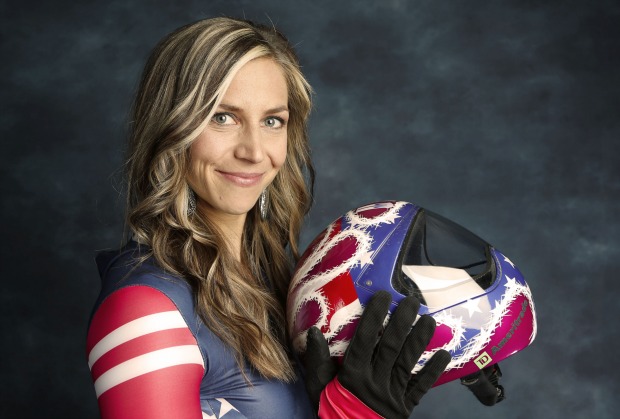 There’s nothing more exciting than watching a Winter Olympian’s reaction to winning their medal.  Some cry, some fist pump, some fall down in pure exasperation. But when Noelle Pikus-Pace won her silver medal in skeleton racing, the entire world watched her create one of the most iconic moments of this year’s Olympics in Sochi, Russia.

After jumping off her sled, she rushed to the stands and climbed up and over the wall in a “Lambeau-leap” type of moment to get to her coach, husband and children, hugging them in what was purely a joyous moment.

“It’s been absolutely incredible, it’s been a whirlwind,” says Pikus-Pace, who capped off her Olympic career on the podium after shattering her leg in a bobsled accident in 2005 and then missing the bronze in the 2010 games at Vancouver by a mere tenth of a second.

“I crossed that finish line and saw my coach throw his hands up in the air, and I thought ‘Oh my goodness, I just won an Olympic medal. I just did it. We did it. We did it!’ So when I crossed the line, I needed to celebrate with them, and they’re over there and I am over here and there is this barricade between us. It was all a blur. I just immediately jumped over the stands like it was nothing, and I got up there and remember saying ‘We did it, we did it!” Because it really just wasn’t about me crossing the finish line, it was about the whole team behind us, it was just incredible.”

Her determination and spirit carried her through these events, earning her fans along the way. “It’s crazy. I am still in Sochi and I don’t really see outside of the bubble I am in, and then I get on Facebook and Twitter and see it’s just going crazy. I feel so honored and feel so blessed to have so many people cheering for me.”

She even admits that winning the medal is giving her a bit of insomnia, but in a good way. “Honestly, even when I am able to go to sleep and my time is my own, I just lay there and think, “Oh my goodness, I am an Olympic silver medalist, I can’t believe it happened! It’s real!” she says.

She also shares that she felt bad for teammate Katie Uhlaender coming in fourth place by .04 seconds, having experienced something similar in 2010.

“I feel so bad, because I know how she feels,” she says. “In 2010 I came in fourth by .10 of a second, so I know it’s a tough place to be, but she’s a trooper. She is so strong, and she is going to come back stronger as a person and athlete then she has ever been before, and I know she is just going to pull through it.”

Pikus-Pace says goodbye to Sochi soon and goodbye to her Olympic career, but there is so much more waiting for her in the future. “I love working with the youth and my Church and my community and the Young Women’s Program, I absolutely love it,” she says. “I will be continuing with that and just trying to be an example to all of those around me. I mean, that is really the biggest thing.”

She adds, “Of course, I am going to continue raising my family and help my kids achieve their dreams and goals. I want to join the PTA and bake cookies and decorate for the holidays, and continue on with my hat company. Who knows, I want to write a book, I have a lot of things I still want to do.”

Balancing all of her goals with being a mom can be difficult, though. “It’s really hard and there are a lot of us who are struggling to balance work and being a parent,” she says. “For me, it’s been a matter of time management and prioritizing. I know my kids and family always come first, so I make sure they get the love that they need, and then I try to fit in all in. Between my 5 a.m.  workouts, getting the kids breakfast and getting Lacey off to school, it’s a balancing act. It’s been a matter of  having an awesome support system. I couldn’t do it without my husband and my family.”

Pikus-Pace is also a member of Kellogg’s Team USA and their Great Starts campaign. “They’ve been awesome; as an athlete, I have been so blessed, and now I just want to give back, and Team Kellogg’s has been doing amazing things,” she says. “They have a ‘Great Starts’ program, and Kellogg’s knows that one in five kids in the U.S go without breakfast. They want to change that. If you use the hashtag #greatstarts, they will give a child in need a breakfast, so it is as simple as that, get on twitter and use the hashtag #greatstarts.”

Go to www.kelloggs.com/teamusa to view the athletes’ inspirational beginnings through a series of Start Story videos, which follow Team Kellogg’s journeys to the Sochi Games. These web videos are part of Kellogg’s ‘Give A Great Start’ initiative to provide consumers with a chance to help give breakfast to kids in need.