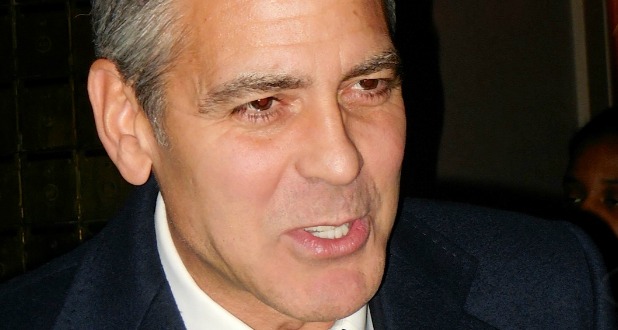 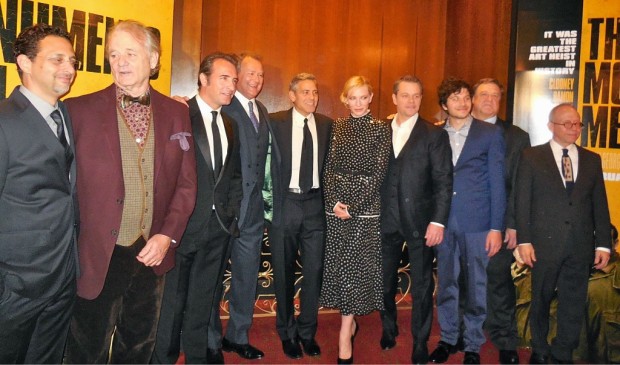 George Clooney’s hair is a little greyer, but he’s handsome and dapper as ever, and charmed all the journalists clamoring for tidbits Tuesday night on the red carpet at the premiere of his new film, “The Monuments Men,” at the Ziegfeld Theater.

“The Monuments Men” stars Clooney, and it’s also his fifth time as a director. Clooney co-wrote the screenplay, with his longtime producing partner Grant Heslov, based on Robert M. Edsel’s book, “The Monuments Men: Allied Heroes, Nazi Thieves and the Greatest Treasure Hunt in History.” It’s the story of the U.S. Army’s Monuments, Fine Arts and Archives unit that sought to rescue millions of pieces of art that the Nazis tried to loot or destroy in the final days of World War II. 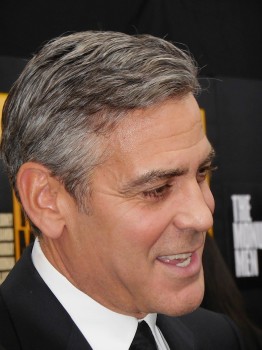 Clooney’s parents Nick and Nina, who also attended, worked the red carpet like pros. Clooney’s father has a role in the film, where he plays his son’s character 30 years older. Nina Clooney, an affable and attractive woman, fielded questions about her son’s romantic life, to which she diplomatically replied, “That’s his business and his life. I wanted both of my kids to do what they wanted to do in life.”

Edsel told me he was happy with how his book was represented on screen. “The overarching principals of the story are in tact and that’s what matters. I want the most dramatic film they can make that engages the largest audience possible, and I think they’ve done that, but at the same point in time, these events that they’re depicting took place.” And even though time lines and locations were adjusted, “they’re acceptable adjustments, and I’m very proud of what they’ve done.”

Bob Balaban had high praise for Clooney as a director. “He’s straightforward. He knows what he wants. He prepares and he’s smart, so that’s a great thing to be around, and he maintains a really nice atmosphere. You don’t see him sweating and straining. And directing this movie is like a herd of elephants all going in the wrong direction. We’re on trucks and we’re going up mountains and it’s raining. George was praying for snow for the Battle of the Bulge and then it snowed and then it didn’t stop snowing until summer, so he really had to deal with a lot. To watch grace under pressure and intelligence and wit, that’s George.”

Hugh Bonneville – the Earl of Grantham for “Downton Abbey” to most of us – also raved about Clooney to me: “His courtesy and good nature and sense of fun is legendary, but he’s also a good actor’s director in that he gets a good bunch of people around and he makes you feel very relaxed so you can bring ideas to the table, and then he can just slam the door in your face and say, ‘No, stay on your marker and say it like this.’ So actually he’s a mixture of old school and new school.”

When I asked if he was on the receiving end of any of Clooney’s notorious pranks, he laughed, “I was the new boy. I think I was let off the hook lightly,” but  “maybe that’s the biggest prank of all. Maybe I’m not even in the movie,” he laughed.

Clooney was, of course, the center of attention and he spent a generous amount of time talking to the press. First he mentioned Philip Seymour Hoffman, whose death was very much on his mind. “It’s strange to be here just 48 hours after he died. Everybody’s sad and putting on a brave face to get through this. It’s pretty traumatic. It’s senseless. We miss him a lot.” Later when he introduced the film inside the theater, he brought up the “Capote” actor again and how his death weighed on all their minds.

As questions were yelled out to Clooney on the red carpet, he answered them all.

“I didn’t enjoy it, and I’ll tell you why,” Clooney said. “Matt’s usually drunk, so we had to have somebody on the set all the time to make sure he stayed sober.”

Did he prank him more than once? Clooney had the costume designer take in Damon’s pants 1/8 of an inch every few days so that the actor thought he was putting on weight. “It was just one good time, but it went on for a long, long period time,” Clooney said. “I’m working on a really good prank now though.” He wouldn’t say more, although by now, the pranks have double duty of diverting journalists from asking about his love life.

Someone asked what inspired him to make the film.

“I didn’t know the story of the film, and I know a lot of World War II stuff, and I thought it was fascinating. A story about not just that Hitler tried to kill everyone, but he tried to make it as if they didn’t exist at all. As if they hadn’t existed and to steal their culture, I thought that was a story that was worth telling, and we found a way to do it.”

As for whether it gets easier to direct and star and write, Clooney said, “It gets really easy to direct yourself because you know what you want.”

Does he hope Cate Blanchett wins the Oscar? “I would love it if she won, but I have a lot of good friends, so I have to be careful how I answer that,” Clooney explained. (His co-star in “Gravity,” Sandra Bullock, is also up for a best actress nomination.)

Right before he slipped into the theater, I asked Clooney, “What was the most challenging part of making the movie?”

Inside the theater in introducing the film, Clooney mentioned Philip Seymour Hoffman and how sad he and the cast members were about his death. He then introduced family members of the real-life Monuments Men who were in the audience.

Clooney chatted with anyone who approached him and posed for pictures. He told one man, “I like your grey hair.”

We also saw Jean Dujardin at one corner of the cavernous room taking selfies with strangers, while Roger Waters came over introduced himself to Bill Murray, who was in another corner. Matt Damon – at the other end of the room – posed for photos with people in uniform and hugged and spoke to anyone who approached.

But the center of attention was always George Clooney, who greeted everyone with an extended hand and exuded Hollywood grace and charisma.

Click the images below for larger views. All photos by Paula Schwartz.