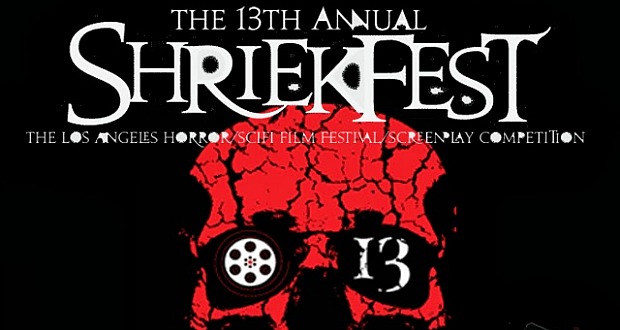 Shriekfest 2013 was an unexpected surprise and we can all thank founder/director Denise Gossett for assembling some of the best unseen horror and sci-fi films each year since 2001. If you didn’t get there in 2013, put it on your calendar for 2014. Also follow them on Twitter at @shriekfest.

The opening night party took place at the über-cool neighborhood bar/goth club Boardners/Club B52 in Hollywood. The actual fest was held at Raleigh Studios on Melrose Blvd.

The fest was more than sitting in the dark watching a movie and leaving when it’s over. It’s a community that supports each other. I went alone and ended up meeting people I still keep in touch with.

The films are not D- slasher flicks either. They were smart and well-written, which is no surprise because Denise also organizes a prestigious screenplay competition.

I attended Saturday night’s lineup, and the selections were top-notch and varied. First up was “The Last Light,” which uses smart dialog and metaphor to portray the good vs. evil struggle. The characters spend their days in a cluttered packrat’s dream. Did they film this in the house where I rent a room?

Edward Furlong’s character subtly leads the protagonist, Jack, exactly where he wants him. He tells Jack to keep everyone inside and away from the light. The older man, apparently representing Peter here, is played by Jeff Fahey who is trying to lead Jack back to the light. It’s a clever take on Agatha Christie’s story “Ten Little Indians.”

Next up was “Abducted” which is like “Saw” with cell phones, and I mean that in a good way. This movie really knows how to make use of today’s technology. It opens at the beach in Santa Monica; drink it in, kids, because this is no day at the beach. A couple gets abducted and ends up locked in the room of some derelict building and things go south as the tension escalates into a terrific twist ending.

In between movies, I met a finalist in the Shriekfest shorts screenplay competition, A.Z. Ocaza. He was there with Scary Cow, a film co-op from the San Francisco Bay Area. Their mission is to build a film community that actively learns to make better films by making films, there’s a joke in there somewhere. Scary Cow South, anyone?

The final selection of the night was thought provoking and disturbing. As I watched “An American Terror‘s” opening scene, I’m thinking #1) how did this writer get into my head? And #2) shit, why didn’t I do that first? Pretty quickly, it’s obvious this is reminiscent of Columbine and immediately the questions are bouncing around my skull. Did he do this on purpose? Is it too soon? And the soundtrack keeps kicking in, so I move on to – how did he afford such great music?

I’m now watching this like I’m driving by an accident. I don’t want to look, but I can’t help myself. Not since Dee Snider’s character, Captain Howdy in 1998’s “Strangeland” have I seen such a warped serial killer.

I’m thinking, Jesus, I don’t ever want to run into the writer/director, Haylar Garcia, in an alley at night — or day, for that matter — but too late, he’s here and does an insightful Q&A. He answers all of my questions, including the decisions for the killer’s fetishes. You’ll have to watch it yourself; I don’t do spoilers.

Shriekfest achieves two valuable purposes. It offers upcoming writers, actors, and producers a chance to have their work screened and rated by their peers. And it gets the attendees’ creative juices flowing, thereby perpetuating future submissions and guaranteeing longevity.

In the meantime, if you need a quick horror fix, Denise can be heard weekly on Blogtalk Radio.