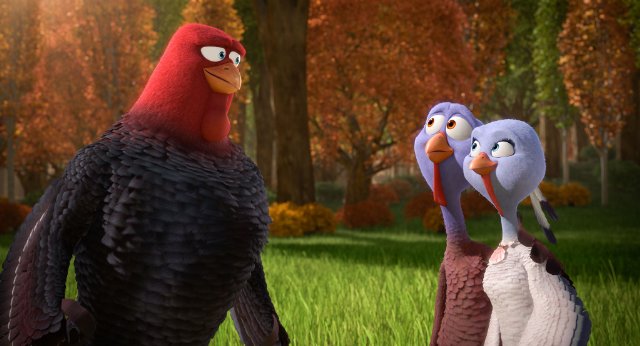 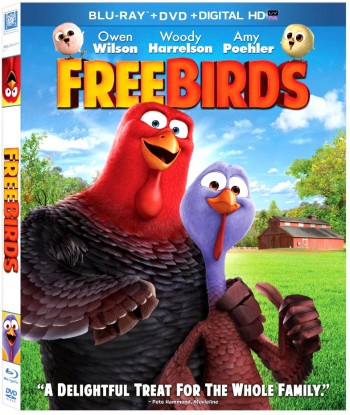 EDITORS: Buy this “Free Birds” review in our Shop.

SYNOPSIS: Two turkeys from opposite sides of the tracks must put aside their differences and team up to travel back in time and change the course of history. Their goal? Get turkey off the holiday menu for good!

REVIEW: When a children’s movie features the voices of  Owen Wilson, Woody Harrelson, Amy Poehler and George Takei, you get the feeling it’ll be a fun movie with great dialogue and a cute storyline. Not so with “Free Birds.”

Oh, it’s not a bad movie. Parts of it are even comical. But when the targeted demographic in the theater – that would be young kids – barely chuckle during the movie, that’s not a good sign. I’m pretty sure I even heard some parents snoring, which ok, is not an altogether bad thing. Still, none of it bodes well for this film.

Owen Wilson voices the part of Reggie, a turkey who just doesn’t fit in with the other turkeys. For one thing, he’s smarter than the rest of the flock, and he’s the only one who realizes why they’re being fattened up — to be eaten by humans at some point. But the other turkeys? They go blithely on their way, unaware that they’ll end up on someone’s Thanksgiving table.

When the President of the United States arrives for the annual pardoning of the turkey, Reggie ends up being the lucky bird, thanks to the young first daughter and her adorably sad eyes at the thought of Reggie getting the axe. She even gets to keep Reggie, so they head to Camp David, where the bird is living it up with telenovelas and all the pizza he could want (who knew turkeys loved pizza?!).

Then all heck breaks loose when Reggie is kidnapped by Jake (Woody Harrelson), a strong, scatterbrained turkey who informs Reggie that someone known as “The Great Turkey” has a mission for them — go back in time to the First Thanksgiving and “get turkeys off the menu.” Soon, the odd couple of Reggie and Jake discover a secret time machine and end up in Plymouth Colony 1621.

Sounds fun, right? So what’s the problem with “Free Birds”? After all, writer-director Jimmy Hayward is a veteran at children’s movies, having helmed “Horton Hears a Who!” and “Robots,” in addition to being an animator on “Finding Nemo,” “Monsters, Inc.” and “Toy Story.” He knows his way around the malleable brains of little ones.

Here’s the thing. There’s too much happening in this movie all at once. You’ve got the turkeys and Thanksgiving theme. The time-travel theme. The insensitive Native American-like wild turkeys of the 1600s. Some political overtones with a Bill Clinton-esque President (voiced by Hayward himself). What could have been a fun story gets bogged down in the details.

That’s not to say there aren’t a few laughs. George Takei (the iconic Sulu on “Star Trek”) is perfect as the voice of a HAL-like time travel machine known as S.T.E.V.E. And the competitiveness between Harrelson’s Jake and the chief’s son is funny at times. Amy Poehler voices the chief’s courageous daughter Jenny, with whom Reggie immediately falls in love. She has a great voice for children’s movies.

Still, all of that wasn’t enough to plop down your hard-earned cash for theater tickets and movie snacks. And a lot of it might go over the heads of kids. Sure, they might be amused by the sight gags and talking animals, which makes this a good movie to watch on DVD or blu-ray.

Birds Flipping History (1080p; 1:27) – A brief live action piece showing kids putting on a Thanksgiving skit that ties into the film. It’s not particularly funny, though.

Animating the Free Birds: The Main Course (1080p; 4:36) – Features some of the animation staff discussing a dance sequence in the film.

Winging It: Animators in Action (1080p; 4:32) – Shows some of the animators acting out scenes that they later animated.

Sex/Nudity: Reggie falls in love with Jenny, whose turkey body is a female human-like hourglass with breasts. They flirt and eventually kiss.

Violence/Gore: Guns are prevalent from start to finish. The pilgrims hunt with guns. The Secret Service have guns. And Myles Standish uses guns and fire to destroy the turkey habitat. Of course, the turkeys fight back.

Profanity: Insults include “coward,” “son of a gun” and “dumb.”

Will Parents Like It? The story is interesting at the beginning, but quickly loses steam part-way into the movie. I’m also not crazy about all the rampant gunplay.