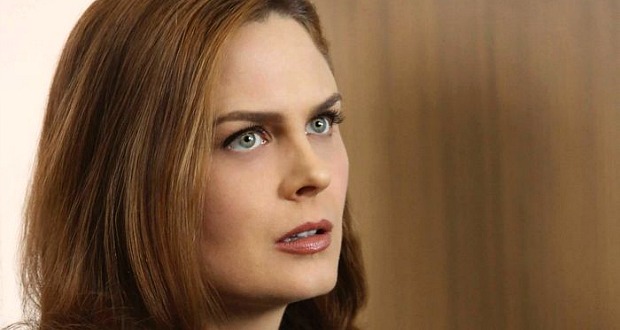 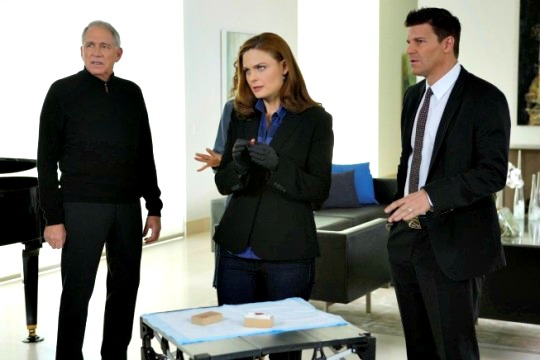 Well, I am very late getting this out. There are a number of reasons, but I won’t bore you with them. The one thing I can say is that all of you “Bones” fans are celebrating it’s renewal. Yes, the magic tenth season! It’s such an accomplishment these days to have an hour show make it that far … and our beloved “Bones” has.

The bad news is that it won’t be back until March 1o – yes, that’s right, back to Monday nights! That must be a good thing.

Okay, now to “The Heiress in the Hill.”

In this episode, the team investigates a kidnap victim (Lauren Frank) who was murdered and found buried in a park. After finding out the victim and her stepmother were not on good terms, the team looked closer to home for the possible murderer.

Booth and Brennan – Booth found a check for $75,000 (an advance for Brennan’s new book) in with Christine’s paperwork. He was, to say the least, shocked. She laughed it off and asked him to deposit it. He couldn’t because they had separate accounts – to her disliking.

Booth felt uneasy about the amount, stating that it was more than he makes in a year. I liked her attitude (although I know it can be a big deal with couples) – “What’s your problem Booth, we’re married now.” She had told him they needed joint accounts, but he said he didn’t want that. At work, Sweets noticed Booth was bothered by something. Booth told him about the check, and Sweets tried to analyse the situation – to Booth’s irritation.

Hodgins – Dear Hodgins found out he had a long lost brother hidden away in a psychiatric home. When a doctor confronted Hodgins about it, he thought it was sort of funny that he was named as a sibling … until he found out his parents had never told him he had a brother. It was a shock (of course), but also sad that his brother, Jeffrey, was mentally disabled. His parents couldn’t control his outbursts and decided to hide him from Jack.

More bad news … Jeffrey’s care hadn’t been paid for, for over a year. Jack went to visit him and all was good, until he said one wrong thing and it set Jeffrey off. An orderly had to calm him down. Boo hoo. Hodgins thought briefly about bringing Jeffrey home to live with him and Angela, but then he realized it was not possible. He was very sad about the whole thing, especially not being able to pay for Jeffrey’s care (aren’t Hodgins and Angela ever going to get their money back?).

The Investigation – After digging around, the number one suspect was Lauren’s step-mom. While living at home, Lauren found out Catherine (the step-mom) had been cheating on her dad. Wouldn’t you know that her pre-nup said she would get nothing if she committed adultery (good thing to add).

Of course, it wasn’t that easy. It ended up that Lauren plotted her own kidnapping. She wanted to run away with her boyfriend and needed cash. She even cut off her own toe to show the “kidnappers” were serious. Unfortunately, the toe became very infected and her boyfriend (the family dog walker), trying to help her, gave her penicillin … which she was deathly allergic to and it killed her. Bummer (really).

Booth and Brennan – Booth finally came around to the fact that Brennan was all for sharing her money … their money (very sweet of her to make him feel at ease – like it wasn’t a big deal). It was pretty cute when he asked her if he had a say in how they spend it … and she said of course he did. That was the build up to what he really wanted. How cool was it when he said they should give the check to Hodgins and Angela to help pay for his brother’s care. Talk about a good heart. 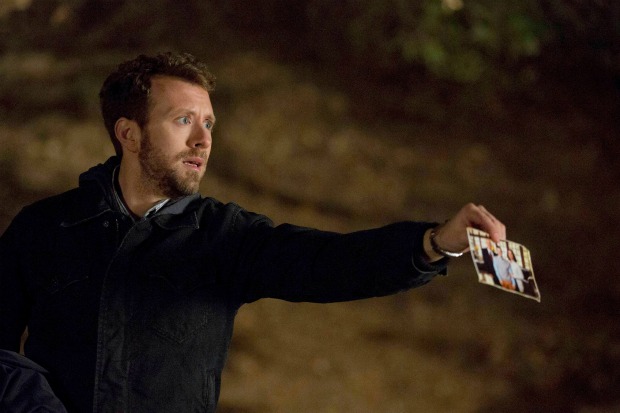 Hodgins and Angela – Booth told them that he and Bones were giving them the money to help with Jeffrey. They were so grateful to have such generous friends, but Hodgins declined and said he would get a loan. Later, he found out Jeffrey had heard he had to leave the home and ran away. Hodgins went to find him and did. Jeffrey thought he was a spy, but Jack calmed him down and they were cool. Hodgins knew that he could help Jeffrey by giving him love and understanding. Very sweet.

Booth and Brennan – I love the last scenes. Booth and Bones together and usually have some romance or something significant to talk about. This time it was Booth telling her that since Hodgins wouldn’t take the money, he would like to make an investment to help veterans when they return home from war. Bones thought that was a great idea.

Did you like this episode of “Bones”? What did you think about Hodgins having a brother? Are you glad the show is back on Mondays?