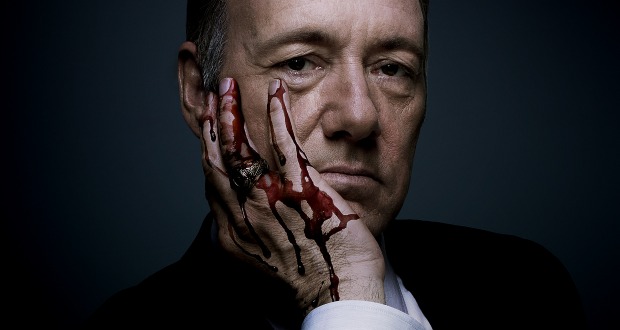 Looking for ideas on how to spend Valentine’s Weekend? Here’s an idea. Snuggle up with your sweetie and binge-watch the entire second season (13 episodes) of “House of Cards,” which premieres on Netflix Friday, Feb. 14, 2014. Sounds like a plan to me.

From Oscar-nominated screenwriter Beau Willimon, “House of Cards” slithers beneath the curtain and through the back halls of greed, sex, love and corruption in modern Washington D.C.

In the second season, Francis (Kevin Spacey) and Claire (Robin Wright) Underwood continue their ruthless rise to power as threats mount on all fronts. Zoe Barnes (Kate Mara, “American Horror Story”), an up-and-coming reporter and Francis’s former paramour, is inching closer to the truth about his crimes.

President Walker’s (Michel Gill, “The Good Wife”) billionaire confidante Raymond Tusk (Gerald McRaney, “Southland”) demands that Francis reciprocate political favors or face retribution. And Claire must confront the increasing glare of the spotlight as it eats away at her and Francis’s once private existence. The Underwoods must overcome these dangers — past and present — to avoid losing everything, regardless of the collateral wreckage they leave in their wake.

In all, the show took home three Emmy wins for casting, directing and cinematography for its first season.

“House of Cards” was nominated for Drama Series, New Series and Episodic Drama (Chapter One) by the Writer’s Guild, and also for a Producer’s Guild Award for Outstanding Drama. In December 2013, Kevin Spacey also received a Screen Actor’s Guild nomination for his role in the series.

Based on the BBC miniseries of the same name, the second season of “House of Cards” is executive produced by Fincher, Willimon, Joshua Donen, Eric Roth, Kevin Spacey, Dana Brunetti, Andrew Davies, Michael Dobbs and David Manson. The one-hour drama is produced by Donen/Fincher/Roth and Trigger Street Productions, Inc. in association with Media Rights Capital for Netflix.