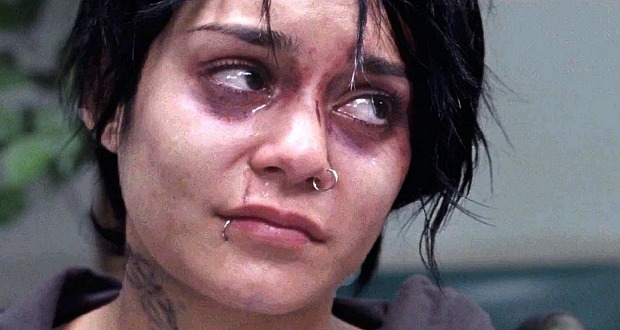 From last year’s “Spring Breakers,” to star turns in “Machete Kills” and “The Frozen Ground,” Vanessa Hudgens continues to distance herself from her clean-cut Disney image with her latest role as a homeless, pregnant teen (“Apple” Bailey) in the gritty drama, “Gimme Shelter.”

The cast also features an unrecognizable Rosario Dawson (June Bailey) as Apple’s desperate crack-head mother. Brendan Fraser plays Apple’s father, a Wall Street broker – who didn’t know he had a daughter until she shows up on his doorstep – and who finally rejects her after she refuses to have an abortion. Along the way, a kindly priest (James Earl Jones) leads Apple to a shelter for homeless teenagers run by a compassionate den mother (Ann Dowd), a move that may turn Apple’s life around.

Tuesday afternoon, while snow flurries and freezing temperatures blasted Manhattan, the 25-year-old former Disney alum – who had just flown in from L.A. – promoted her new indie film at the luxurious Waldorf Astoria Hotel in midtown. Coincidentally, only a few hours earlier, Zac Efron, Hudgens’ “High School Musical” co-star and former boyfriend, participated in a press conference in the very same hotel for his new film, “That Awkward Moment.” As far as I know, they didn’t run into each other and thereby avoided their own possible awkward moment.

Written and directed by Ronald Krauss, “Gimme Shelter” is inspired by meetings and interviews with teenage mothers at Several Sources shelters, a facility to help women in need founded by Kathy DiFiore, who also attended the junket.

Some critics interpreted the movie as having a strong pro-life message. What do you think?

Here are excerpts from the roundtable with Vanessa Hudgens.

Q: What inspired you to do this project? How did it come about?

Vanessa Hudgens: It was just another script that was floating around in my agency and they sent it over my way. I read it and I felt like it’s just one of those roles I’ve dreamt about since I was a little girl, and it’s rare that you get to read scripts like this. It’s fearless. It deals with a lot of content that’s very easily brushed over, and she’s such a powerful, strong woman, and that’s the most attractive thing to me about the role.

How was it altering your appearance so drastically? It looks like you put on weight and you chopped off all your hair.

It was fun. It was amazing. It was so cool. There’s nothing cooler than looking in the mirror and not seeing yourself. As an actor, I think that’s kind of a dream. It was really me. I mean I loved it. I had the most amazing time. It was a lot of work, and it was painful at times, but because I was challenging myself every day, it was so liberating and thrilling.

Your character was based on a real-life person. Did you interact with her and did you ever know anyone in a similar situation?

I had a friend that I grew up with, and I think she was homeless when she was 15. She ran away from home, but she is genuinely still the biggest burst of sunshine that I ever met in my life. It really shows that sometimes even through darkness you control your destiny in the way that you look at life as your own choice.

My character is based on two different girls. The one story is the father on Wall Street, and the other story is with the mother. And then one of the girls was staying at the shelter when I lived there, and we got to become close and she’s incredible and totally opened up to me.

This is the second time I played a real person, and I love it because it means I don’t have to create a person on my own. I have a frame of reference. I can go to that person and ask them what their opinion is or how they feel about something, so it makes it so much easier, if anything.

This character deals with three traumas — the foster homes, her mother trying to pimp her out, and then finally being pregnant. How did you manage to get all the issues and balances in check in the right process and order, and what to emphasize and what not to focus on?

It all came from Ron and the writing. He really does fill it all out right there. I think it was just important for me to understand and see firsthand what effect those things would have on a young woman. He really just kind of spelled it out, and just being at the shelter showed me what it would be like. And it’s all about circumstance and situation. I could be there right now if I didn’t have my parents or have the upbringing that I had. So, there’s a lot of pain that’s involved but that’s something that we all experience. It’s just what situation it’s channeled through.

Midway through the movie, her mother tells Apple that she is a younger version of her and Apple rejects it. Did you see it that way?

I think that addicts are very manipulative and they’re going to say what they want to say to try to reel someone in, and that’s just how they do it. It’s how they maintain a relationship, and it’s so deceitful and so poisonous. So in a way, I feel like that’s her trying to get her to connect because I do believe that you are truly in charge of your future. You’re not subject to your past. You’re not subject to your parents. You can control your future and maybe she slightly is her at that moment. But I really think, if anything, it’s a tactic to get Apple to feel connected to her and accept her as her mother. It’s all a psychological game. 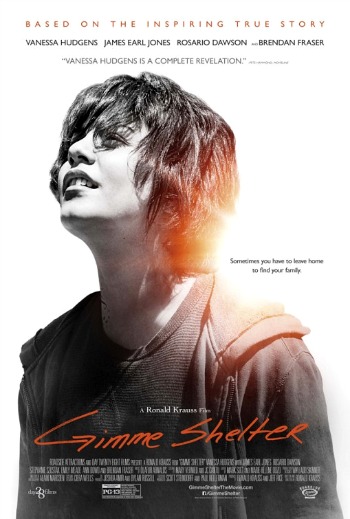 So amazing! That woman, I just cannot get enough of her. She is seriously such a brilliant woman to look up to, I think. She’s so passionate and dedicated to everything that she does. I mean she blows me away, because not only is she an amazing actress, she’s a complete activist and feminist and just so smart and intelligent and she just really sets the tone for actresses.

Did you do anything special to prepare for the more intense crazy scenes with her? She plays a pretty horrible person.

I know she does. [Laughs] I mean, it’s funny because it could be traumatic if you were really going through that yourself, but we’re hiding behind characters and at the end of the day, we’re big kids playing pretend, so we kind of got to look back at it and laugh along the way.

You did this role and before that “Spring Breakers.” There’s a kind of corollary between the characters. Apple could have been one of the characters. It’s given you a great opportunity to explore a darker side of characters than what you’ve done before. Can you talk about that?

It all started with “Gimme Shelter.” That’s what really kicked off this new career path, I guess. I did that and then I did “The Frozen Ground,” which was very dark as well, and then I did “Spring Breakers.” So I mean it was fun, it was a really exciting and challenging and taxing time because everything was very heavy and there was so much to dive into and really analyze. It was a lot of work. After that I was just like, “Please let me do a comedy,” which I did, so now I’m happy.

What was it like working with James Earl Jones?

So cool! He’s amazing. I mean he’s so pure. He’s such a tender, sweet, caring man. He’s starting to move a little slower but like he’s still has an amazing energy and resonance that just fills a room. Nobody does what he does. He will always have his place in history and films that no one can ever reincarnate.

Were you star struck when you met him?

He’s amazing. He was so, so sweet. I normally don’t get star struck. I’ve only been star struck, either by chefs, or I just met Meryl Streep and I was completely off my rocker. But normally I don’t get star struck. Of course, I was kind of nervous to work with him just because he’s had such an amazing legacy and his body of work is so overwhelming, but he’s so sweet. Most of the time, you meet these people and they’re here to do what you’re here to do as well, so it’s a group effort.

What chefs made you star struck?

I go to this sushi restaurant by my house — it’s owned by (Kazunori) Nozawa – and one day I was sitting there and he was sitting next to me. I was eating my endamame, and I was so nervous and worried I was disrespecting him that I stacked my endamame into a little pyramid.

I have a movie coming out in October called “Kitchen Sink, which is the comedy [I talked about]. It’s really funny! I’m really excited to see it because the entire time we were filming, I was cracking up every single day. It’s set in a time where zombies, vampires and humans lived together as harmoniously as they can … I play the token high school hot chick, but also village stoner, and she’s kind of amazing.